Recently, the company announced the positive data of the phase 1b part of the ZUMA-19 study, which is evaluating the efficacy and safety of lenzilumab combined with CAR-T cell therapy in the treatment of patients with diffuse large B-cell lymphoma (DLBCL).

The results showed that under the recommended phase 2 dose of lenzilumab, the objective response rate (ORR) reached 100%, and no patients had severe cytokine release syndrome (CRS) or severe neurotoxicity (NT).

ZUMA-19 is a clinical study that is evaluating the efficacy and safety of lenzilumab and Gilead CD19 CAR-T cell therapy Yescarta (axicabtagene ciloleucel, Axi-Cel) in the treatment of relapsed or refractory DLBCL.

At the recommended Phase 2 dose, no severe CRS or severe NT occurred. Throughout the study, no adverse events were attributed to lenzilumab. 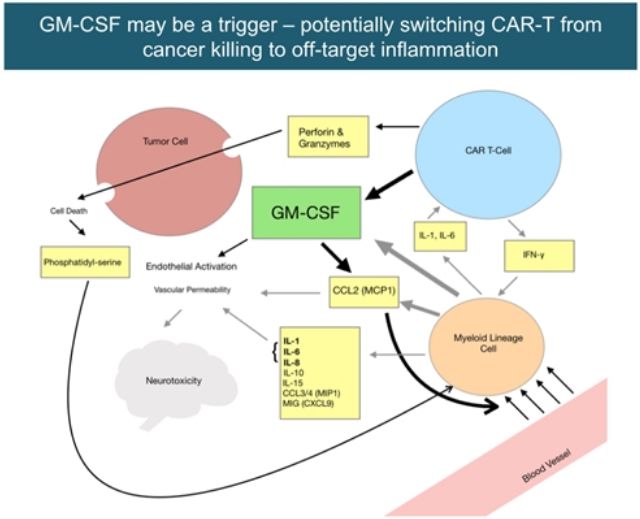 Humanigen Chief Scientific Officer Dale Chappell, MD, said: “These encouraging results from the ZUMA-19 study further prove that lenzilumab may break the link between the efficacy and toxicity (CRS and NT) that are broadly related to CAR-T, and May improve the durability of remission. We believe these data prove the need for a larger study involving multiple CAR-T cell therapies.”

Humanigen will initiate a randomized, multicenter, potential registration Phase 2 study to evaluate the efficacy and safety of lenzilumab in combination with all commercially available CD19 CAR-T cell therapies in the treatment of DLBCL patients. This research plan enrolls about 150 patients, and the research plan is being submitted to the FDA.

Humanigen has terminated the ZUMA-19-related clinical cooperation agreement signed with Kite, a cell therapy company under Gilead, and the two parties will cooperate to end current research activities.

Cameron Durrant, CEO of Humanigen, said: “Humanigen is very pleased to be able to actively develop lenzilumab throughout the CAR-T field and further expand its product line. We thank Kite for sponsoring and contributing so that Humanigen can develop to this exciting point. .”

Lenzilumab is an anti-human granulocyte macrophage colony stimulating factor (GM-CSF) neutralizing antibody. GM-CSF is a cytokine that plays a key role in acute and chronic inflammation of tissues. Lenzilumab can target to bind to and neutralize the activity of GM-CSF, inhibit the inflammatory cascade initiated by GM-CSF, thereby preventing and treating the cytokine storm and neurotoxicity associated with GM-CSF during CAR-T treatment.

Yescarta is a CD19 CAR-T cell therapy, which was acquired by Geely Dehao to acquire Kite for US$11.9 billion. In the United States, Yescarta was approved by the FDA in October 2017. It is the first CAR-T cell therapy for adult patients with relapsed or refractory large B-cell lymphoma (LBLC). The specific indications are:

For the treatment of adult patients with relapsed or refractory LBCL who have previously received 2 or more systemic therapies, including diffuse large B-cell lymphoma (DLBCL),

Yescarta is not suitable for the treatment of primary central nervous system lymphoma.

In March 2021, Yescarta was approved by the US FDA for a new indication: for the treatment of relapsed or refractory (R/R) follicular lymphoma (FL) that has previously received 2 or more systemic therapies. Adult patients.

It is worth noting that the currently marketed CAR-T cell therapies (including Yescarta) have black box warnings about CRS and NT in their US prescription information.