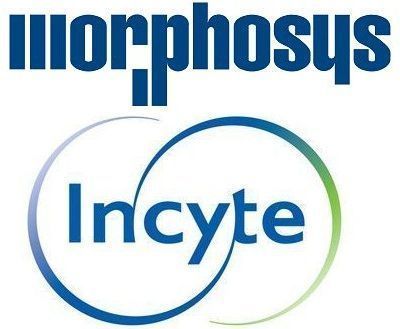 frontMIND is a randomized, double-blind, placebo-controlled, global phase 3 clinical study, carried out in patients with medium- to high-risk and high-risk DLBCL who have not previously received treatment.

The study will enroll approximately 880 patients with DLBCL. The primary endpoint is progression-free survival (PFS), and the key secondary endpoints include overall survival (OS) and overall response rate (ORR).

In the United States, approximately 30,000 patients are diagnosed with DLBCL each year. R-CHOP is the current standard of care for patients with DLBCL in the first-line treatment, but about 40% of patients do not respond to R-CHOP or relapse after treatment, especially those with moderate to high-risk and high-risk diseases, and the prognosis is very poor.

The combined application of Monjuvi and lenalidomide with R-CHOP has the potential to improve the efficacy and bring a meaningful new choice for newly diagnosed high-risk DLBCL patients.

In December 2020, the preliminary data from the firstMIND study is very encouraging.

This is an ongoing open-label, randomized phase 1b study that is evaluating the efficacy and safety of the Monjuvi+R-CHOP regimen and the Monjuvi+lenalidomide+R-CHOP regimen in the first-line treatment of newly diagnosed DLBCL patients.

The mid-term evaluation data announced at the 2020 American Society of Hematology (ASH) annual meeting showed that in the combined 2 groups of patients, the initial response rate (ORR) was as high as 91.1% (41/45).

Monjuvi and lenalidomide and R -The CHOP combination regimen has acceptable tolerance.

These results provide information and support for the further study of Monjuvi combination therapy in the frontMIND study.

The active pharmaceutical ingredient of Monjuvi is tafasitamab, which is a new type of humanized Fc domain optimized cytolytic CD19-targeted immune-enhancing monoclonal antibody.

At the end of July 2020, Monjuvi was approved by the US FDA to combine with lenalidomide for the treatment of relapsed or refractory diffuse large B-cell lymphoma (r/r DLBCL) adult patients who are not suitable for autologous stem cell transplantation (ASCT). Including DLBCL from low-grade lymphoma.

It is worth mentioning that Monjuvi is the first second-line therapy approved by the FDA for adult patients with r/r DLBCL who have progressed during or after first-line treatment.

This approval is based on data from the L-MIND study. This is an open-label, multi-center, single-arm Phase II study that evaluates Monjuvi combined with lenalidomide treatment that has received at least one but no more than three therapies (including an anti-CD20 targeted therapy, such as ritux Cixiimab), r/r DLBCL patients who are not eligible for high-dose chemotherapy (HDC) and subsequent autologous stem cell transplantation (ASCT). 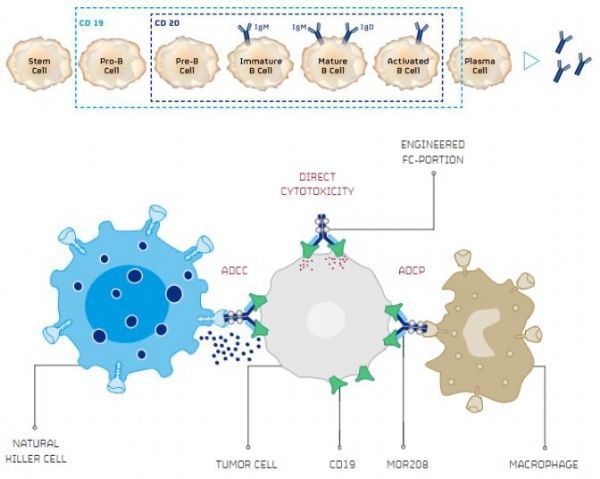 Tafasitamab is a new humanized Fc-enhancing monoclonal antibody targeting CD19. Its Fc domain has been modified (including 2 amino acid substitutions S239D and I332E), which significantly enhances its affinity for activated FcγRIIIa on effector cells.

In preclinical model studies, tafasitamab has been confirmed to induce direct apoptosis of cancer cells by binding to CD19.

Currently, tafasitamab is being developed for two types of B-cell malignancies, including chronic lymphocytic leukemia (CLL) and DLBCL.

It is characterized by the rapid growth of malignant B cells in the lymph nodes, spleen, liver, bone marrow, or other organs.

30%-40% of patients do not respond to initial treatment or relapse afterwards, and there is a significant unmet medical need for effective treatments. In the United States, approximately 10,000 patients are diagnosed with r/r DLBCL that does not meet ASCT conditions each year.

“CAR-T killer”: tafasitamab will challenge the two CD19 CAR-T therapies that have been on the market 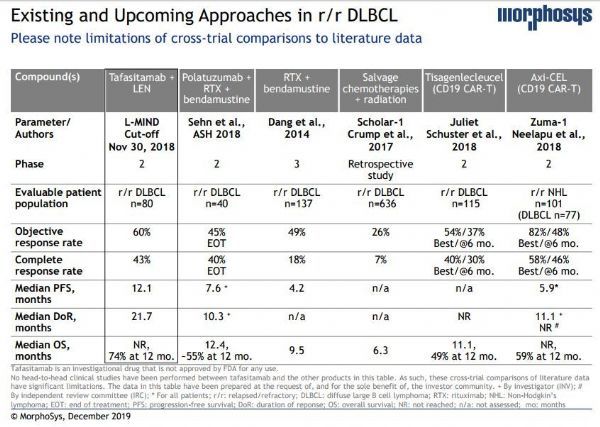 Some analysts pointed out that Monjuvi will directly challenge the two anti-CD19 CAR-T therapies on the market for the treatment of R/R DLBCL-Novartis Kymriah and Gilead Yescarta.

It is a live T cell therapy product. Both Kymriah and Yescarta treatment procedures require the isolation of patient’s T cells and genetic modification in vitro so that the T cells express a chimeric antigen receptor (CAR) designed to target CD19, and then the modified T cells are returned to the patient’s body , Looking for CD19-expressing cancer cells to play a therapeutic role.