In order to prevent the recurrence of CD19- or CD19lo disease, we tested the bispecific targeting CD19 and/or CD22 (CD19-22.BB.z-CAR) in the Phase I clinical trial of adult relapse/refractory B (NCT03233854) Sex CAR cell acute lymphoblastic leukemia (B-ALL) and LBCL.

Axicabtagene ciloleucel resistance is associated with CD19- and CD19lo LBCL. To assess whether resistance to CAR19 therapy in LBCL is associated with CD19-/lo recurrence, in our institution, semi-quantitative qualitative immunohistochemistry (IHC) H score was used to measure the acceptance of axicabtagene ciloleucel (axi-cel). Our subjects included 44 consecutive patients treated with axi-cel, and these patients had available IHC pretreatment tissue biopsies.

Some advanced biopsies showed complete loss of CD19, while other biopsies showed reduced CD19 expression (Figure 1c). In addition, treating the H score before treatment as a continuous variable also shows that there is no difference between patients with persistent disease control and patients with disease progression (t-test P=0.32).

These data indicate that progression after axi-cel treatment for LBCL is associated with CD19-/lo disease in a high percentage of patients, but pre-treatment semi-quantitative IHC measurement of CD19 expression does not identify patients at risk of recurrence.

In order to assess whether the quantitative evaluation of CD19 cell surface density can predict the results after axi-cel and try to define the threshold level of antigen expression associated with recurrence, we used quantitative flow cytometry to measure the live single cell suspension obtained by fine needle aspiration The CD19 site density. As shown in Figure 1d, Preaxi-cel LBCL showed a significant difference in the density of CD19 sites within and between patients. 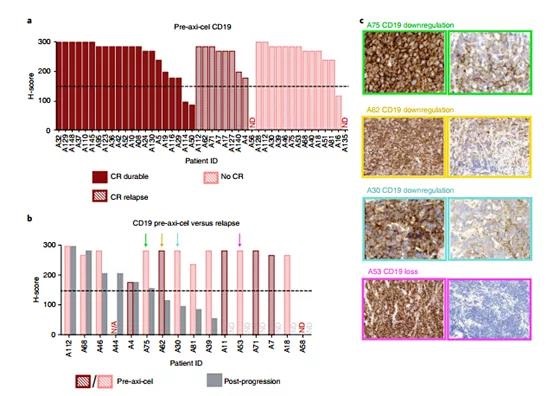 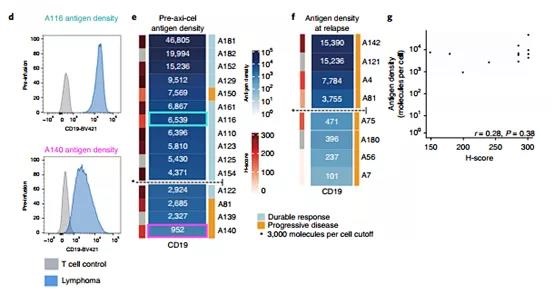 In our cohort, 3 out of 4 LBCL patients expressing ≤3,000 CD19 molecules per cell experienced progression, and 1 out of LBCL patients expressing >3,000 molecules per cell experienced disease progression. Among the 8 patients studied after the axi-cel progression, 4 showed a CD19 site density ≤3,000 molecules per cell (Figure 1f and expanded data Figure 2). The correlation between H score and antigen site density is not good (Spearman r=0.28, P=0.38; Figure 1g and expanded data Figure 2). These data confirm that the emergence of CD19-/lo LBCL is the main cause of resistance to CAR19 treatment, which indicates that LBCL with a median expression of ≤3,000 mol ecules before treatment has an increased risk of recurrence, which improves the prospect of quantitative flow. Cytometry, rather than IHC, can a priori identify LBCL patients at risk of CD19-/lo recurrence after CAR19.

These data confirm that the emergence of CD19-/lo LBCL is the main cause of resistance to CAR19 treatment, which indicates that LBCL with a median expression of ≤3,000 mol ecules before treatment has an increased risk of recurrence, which improves the prospect of quantitative flow. Cytometry, rather than IHC, can a priori identify LBCL patients at risk of CD19-/lo recurrence after CAR19. 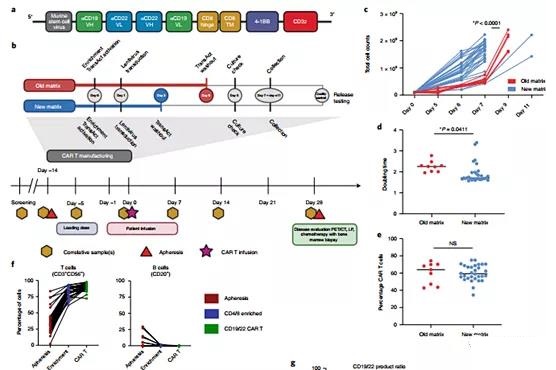 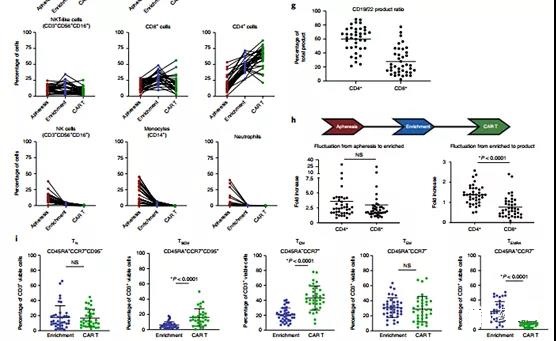 No dose-limiting toxicity (DLT) occurred during the dose escalation, and a total of 1 DLT occurred during the clinical trial. Cytokine release syndrome (CRS) of any grade occurred in 29 patients (76%), with a median onset of 1 day after infusion and lasting 4 days (Tables 1 and 2). 5). 2 patients (5%) ≥3 CRS. Neurotoxicity occurred in 14 patients (37%; 9 patients had LBCL and 5 patients had B-ALL); 4 patients experienced neurotoxicity ≥ Grade 3. The median episode of neurotoxicity was 5 days after the infusion (range 3-9) and lasted for a median of 4 days. Both CRS and neurotoxicity were treated according to institutional guidelines, with 15 patients (39%) receiving ≥1 dose of tocilizumab and 45% of patients receiving corticosteroids. All CRS and neurotoxic episodes are resolved. Two patients had laboratory evidence of macrophage activation syndrome, with methemorinemia and hypofibrinogenemia, and with neurotoxicity of grade ≥3, and received high-dose corticosteroids and anakinra White. 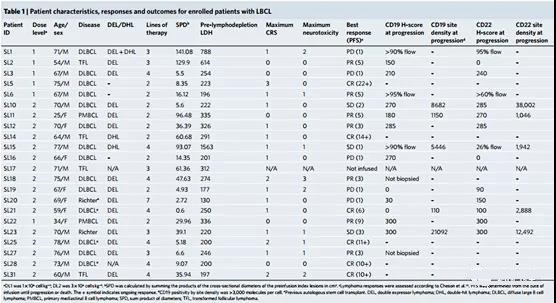 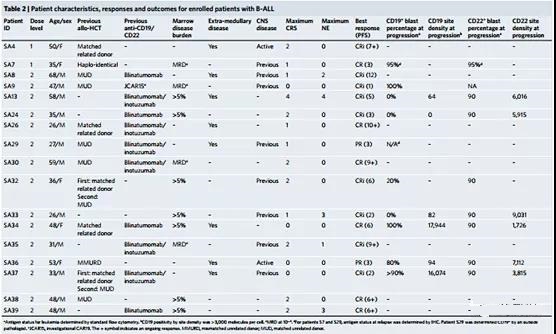 At the last evaluation, no ctDNA was detected in the four patients with sustained clinical response. In 12 patients with disease progression, we observed an initial decrease in ctDNA, reaching the lowest point 14-21 days after infusion, and 9 patients showed an increase in ctDNA at or before clinical progression. These findings indicate that the progressive disease after CD19-22.BB.z-CAR in LBCL is related to strong early response and early acquired drug resistance. 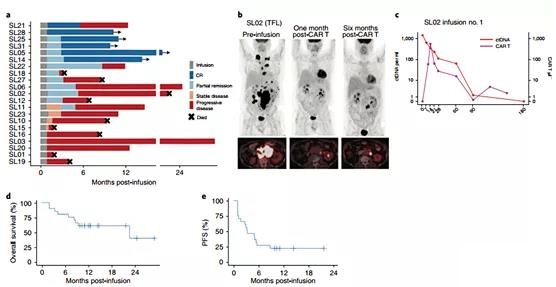 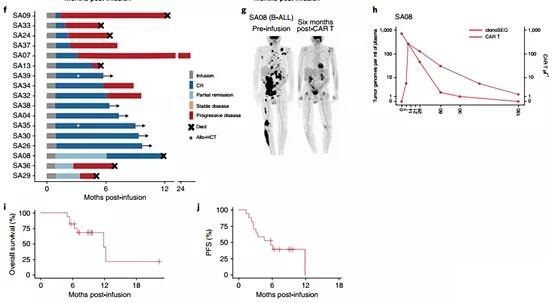 The main response to B-ALL was evaluated 28 days after the infusion.

All (n=17) B-ALL patients achieved remission; 14 cases achieved CR (82%), and 3 cases achieved partial remission (Figure 3f). One patient’s response (SA8) improved to CR 6 months after infusion (Figure 3g, h), resulting in an overall CR rate of 88%. All these patients had minimal residual disease (MRD) at 10-4 bone marrow sensitivity. ) Are all negative (extended data in Figure 7) or positron emission tomography (PET)/computed tomography (CT) for patients with extramedullary disease. After a median follow-up of 9.3 months (95% CI 7.2-NE), the median overall survival was 11.8 months (95% CI 5.5-NE) (Figure 3i), and the PFS was 5.8 months (95% CI 2.6-NE) ) (Fig. 3j). Two patients underwent allogeneic stem cell transplantation in CR and are currently in remission. A series of MRD analyses performed by next-generation sequencing (NGS) of immunoglobulin receptors from bone marrow showed that 100% (5 out of 5) patients with continuous CR achieved sustained negative MRD responses, while 70% (7 out of 10) progressors persisted or increased MRD before or during morphological recurrence.

CD19-22.BB.z-CAR cells were detected in the blood by flow cytometry and quantitative PCR (qPCR), and reached a peak value between 10-14 days after infusion (Figure 3k, l). The median peak value of circulating CD19-22.BB.z cells measured by flow cytometry is 36CARμl-1 (IQR=13-136); by qPCR, there are 1,794 (IQR=509-4,315) cells per 50 ng of genomic DNA A copy of CD19-22.BB.z is transgenic. There was no significant difference in peak spread between LBCL and B-ALL or dose levels. The higher expansion measured by the area under the curve (AUC) is associated with increased CRS and neurotoxicity. Although CD4+ cells are predominant in the manufactured CD19-22.BB.z-CAR products, measured by AUC and peak level, CD8 CD19-22.BB.z cells showed greater expansion relative to CD4 and as in It is seen by the peak CD4:CD8 ratio of <1 in most patients. The analysis of CAR+ cell depletion markers in the product shows that CD4+ cells express higher levels of CD39 and programmed cell death protein 1 (PD-1)), which may be the expansion of CD4+ in vivo compared with CD8+ CAR T cells Reduce.

Antigen expression in patients with disease progression after CD19-22. 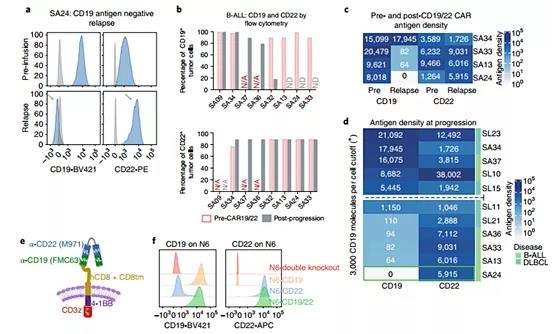 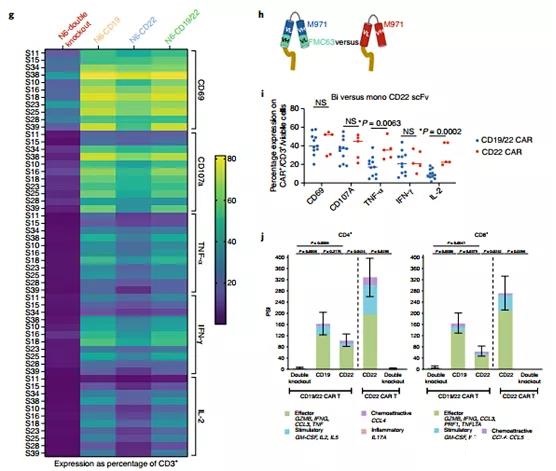 Figure 4 | CD19 negative recurrence, the CD22 site density remains unchanged after CD19-22.BB.z-CAR, and the function of CAR T on CD22 is weakened.

When stimulated by CD22 scFv, CD19-22.BB.z-CAR T secretes fewer cytokines. The pattern of CD19-/lo recurrence and CD22 retention indicates that T cells expressing CD19-22.BB.z-CAR exert significant immune pressure on CD19, but not on CD22. The in vitro model proved that CD19-22.BB.z-CAR has activity on CD19/CD22+ cell lines. To solve this problem, we used a single-cell assay to compare the relative potency of the signal delivered by CD19 scFv with the CD22 scFv in CD19-22.BB.z-CAR (Figure 4e).

We tested the CD22.BB.z-CAR T cell product (n=5) manufactured by Good Manufacturing Practice (GMP) in patients with relapsed/refractory LBCL or B-ALL from an ongoing clinical trial (NCT04088890) to Against N6-double gene knockout and N6-CD22. The average fluorescence intensity of monospecific CARs on T cells is higher than that of bispecific CARs. We found that CD19-22.BB.z-CAR and CD22.BB.z-CAR T cells showed similar levels of activation, as measured by CD69 expression and IFN-γ and CD107 secretion (Figure 4i).

However, compared with CD19-22.BB.z-CAR T cells, CD22.BB.z-CAR T cells showed significantly higher levels of TNF-α (P=0.0063) and IL-2 (P=0.0002 )secretion. Similarly, compared with CD19-22.BB.z-CAR in the presence of N6-CD22, single-cell cytokine secretion using the IsoPlexis platform showed a higher PSI of CD22.BB.z-CAR T cells (n=4; Figure 4j). After stimulating CD4 and CD8 CAR+ cells with N6-CD19/22, N6-double knockout, N6-CD19, or N6-CD22 N6 lines (n=7), a 32-fold human panel 27 was used to evaluate the secretion of single-cell cytokines. Overall, compared with N6-CD22 stimulation, N6-CD19 stimulation of CD19 produced a higher multifunctional intensity index (PSI) for testing CD8CAR+ products (P=0.04) (Figure 4j). In summary, these data indicate that both CD19 and CD22 scFv contained in CD19/22.BB.z-CAR can send signals in response to target recognition, but compared with CD19 scFv ligation, the cytokine induced by CD22 scFv ligation in the bispecific CAR The level is low. In contrast, CD22 scFv ligation in monospecific CAR results in higher levels of cytokines than bispecific CD22 scFV. The reduced potency of CD22 scFV provides a mechanism for the recurrence of CD19-/lo disease, and CD22 expression is preserved in the population studied here.

This work provides evidence that antigen-/lo escape is the main route of resistance after CAR19 treatment of LBCL, and the quantitative antigen density in LBCL is related to the results after CAR T cell treatment. Using a dual-specific CAR that can recognize both CD22 and CD19, we have demonstrated the safety and impressive clinical activity of B-ALL. The 6-month PFS (29%, 95% CI 12-48%) of LBCL in this trial was similar to tisagenlecleucel64.

Therefore, the lymphoma group is closed in this study, and the recruitment of B-ALL patients is underway. The resistance to bispecific CAR is related to the recurrence of CD19+CD22+, which may reflect the inherent limitations of CAR T cells, and the recurrence of CD19-/lo but CD22+, which means that the immune pressure on CD22 is insufficient. Our data also illustrates the value of cytokine production as a key product quality attribute to verify the effectiveness of CAR T cells. Future work needs to optimize the multi-specific targeting of CAR T cells to improve the efficacy of this type of therapy in B-cell malignancies and other solid and blood cancers.