Safety and results of CAR-T cell clinical trials for solid tumors.  In order to provide the best conditions for the introduced CAR-T cells, patients are usually pretreated for lymphocyte depletion.

In order to provide the best conditions for the introduced CAR-T cells, patients are usually pretreated for lymphocyte depletion. This is based on the results obtained after the transfer of tumor infiltrating lymphocytes (TIL) and CD19-directed CAR-T cells. In these studies, it is shown that lymphatic clearance or conditioning chemotherapy before T cell infusion significantly improves the persistence and efficacy of these T cells. For example, by reducing the number of suppressor cells, or removing competing sink cells, IL-7 and IL-15 cytokine can be used for T cell expansion.

In registered clinical trials describing the time of lymphatic clearance, the interval between lymphatic clearance and the application of CAR-T cells is usually 3-5 days before CAR-T cell infusion, and lasts for 2-4 days. Twenty-five trials explicitly mentioned that lymphatic removal was not performed (Figure 1). 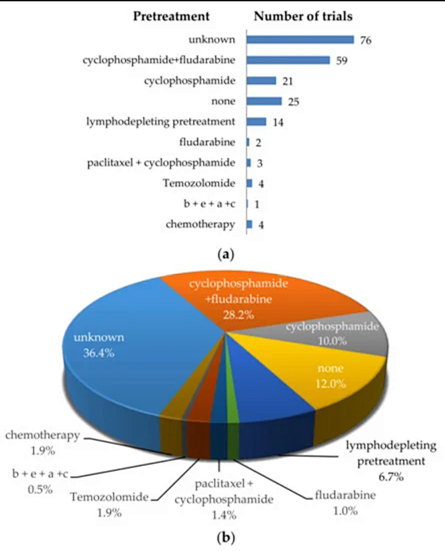 Most clinical trials use CAR-T cells by intravenous injection of CAR-T cells (n=105; Figure 2) and count the T cells to homing correctly to the tumor. However, there are other possible sites, especially if one wants to apply CAR-T cells very locally to the tumor or the resection site. For example, trials for the treatment of brain tumors use intracranial (n=2), intracavitary (n=3), or intracerebral (n=6) injections, or injection into the ventricular system (n=8) (Figure 2). 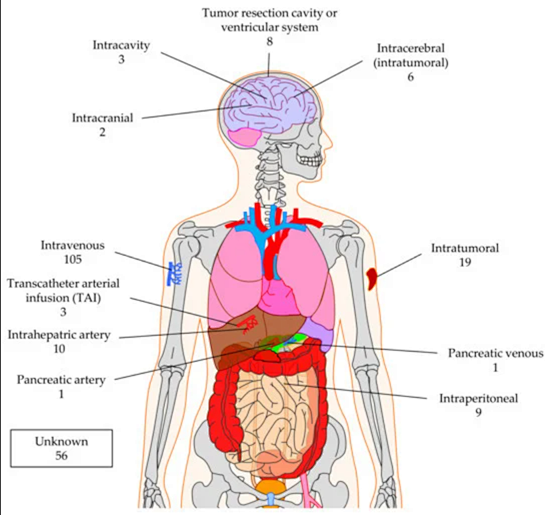 3.  Safety measures to control the negative impact of CAR-T cells on patients

As mentioned above, in CAR-T cell clinical trials for solid tumors, most targeted antigens are not completely tumor-specific. It may be that the antigen is expressed to a certain extent on normal healthy tissues, and because the non-malignant bystander cells that co-express the target antigen are accidentally killed, CAR can induce on-target/extra-tumor toxic-T cells [11]. In order to be able to shut down CAR-T cells immediately after the patient discovers toxicity, various strategies have been developed (Figure 3). 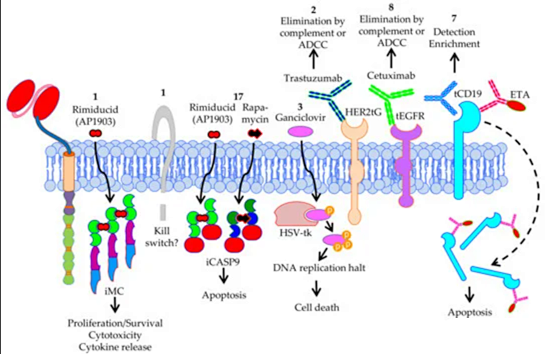 Figure 3. Schematic diagram of the safety measurement of CAR-T cell therapy for solid tumors. The number represents the number of clinical trials using this safety measure.

One of the oldest suicide switches used is the herpes simplex virus-thymidine kinase/ganciclovir (HSV-tk/GCV) strategy. In terms of mechanism, HSV-tk phosphorylates GCV, and the resulting triphosphate form is integrated into DNA by DNA polymerase, leading to chain termination and cell death. HSV-tk/GCV also induces apoptosis. One disadvantage of using HSV-tk/GCV is that it may be immunogenic in immunocompetent patients, resulting in limited persistence of HSV-tk transduced cells. Despite this, the HSV-tk/GCV strategy is still used in the three clinical trials (Figure 3).

In addition, some trimmed molecules are used to select and/or remove CAR-T cells, such as truncated HER2 (HER2tG), truncated EGFR (tEGFR), and truncated CD19 (tCD19) (Figure 3). Trastuzumab (Herceptin®) is combined with HER2tG and used in two clinical trials to eliminate the targeting/de-tumor response of CAR-T cells through complement or antibody-dependent cell-mediated cytotoxicity (ADCC) (Figure 10). In eight clinical trials (Figure 3), cetuximab was used to ablate CAR-T cells expressing tEGFR through the same mechanism. Seven clinical trials used truncated CD19 as a selection marker for CAR-positive T cells, or used an anti-CD19 antibody conjugated to Pseudomonas toxin (CD19-ETA’) as an elimination marker (Figure 3). A clinical trial used an undisclosed “stop switch” as a safety measure (Figure 3).

A special safety measure to avoid long-term autoimmunity caused by CAR targeting/non-tumor response is to introduce CAR through mRNA electroporation (n=5, 2.6%). We have previously demonstrated that transiently transfecting T cells with CAR using mRNA electroporation may be an effective and safe tool in cancer immunotherapy.

The electroporation procedure is based on a complex physicochemical mechanism, which results in perforation of the plasma membrane after the application of an electric field, thereby allowing the mRNA to subsequently enter the cytoplasm. The advantage of CAR-T cells transfected with RNA is that receptor expression is time-limited (Figure 4), so that potential off-target and off-target/off-tumor toxicity also occur instantaneously. The CAR-RNA transfer strategy is particularly attractive in phase 0/1 clinical trials exploring new tumor antigens for CAR-T cell therapy, but the clinical safety is unknown. 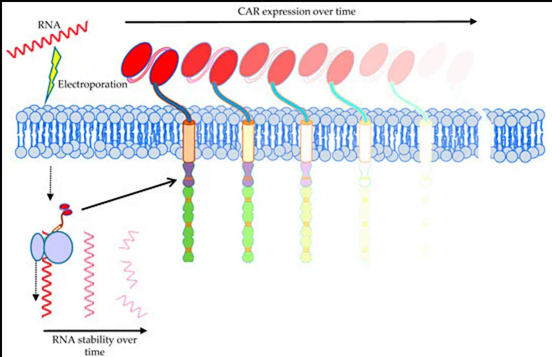 Figure 4. Schematic diagram of the introduction of CAR by mRNA electroporation. It shows that the stability of the introduced mRNA is low over time, and the transient expression of CAR on the surface of T cells.

Even non-solid tumors were transfected with RNA using CD19 and CD123 as target antigens (NCT02277522; NCT02624258; NCT02623582). The mRNA-CAR-T cells in these studies are well tolerated, the cells migrate to the primary and metastatic tumor sites, show clinical anti-tumor activity, and there is no evidence for normal tissues. After topical application, c-MET-CAR-T cells induce intratumoral necrosis. It is important that some injected c-MET-CAR-T cells enter the bloodstream and can be monitored in the circulation for a short period of time.

In contrast, in patients with pancreatic cancer, there is no cytokine release syndrome and no dose-limiting toxicity, but 2 out of 6 patients are actually in stable condition]. When using RNA-CAR-T cells, robust proliferation and persistence are not so important, so there is no need for lymphatic depletion, because transient receptor expression itself requires repeated injections. Unlike most trials registered with clinicaltrials.gov that use virus-transduced cells, these trials only need to be applied once. It is assumed that these cells will proliferate after tumor antigen recognition and do not need to be repeatedly applied. RNA-transfected cells will lose CAR expression ( Figure 4) and must be supplemented from the outside to maintain the cytolytic pressure on the tumor.

The possible causes of serious adverse events described by Maus et al. in the above-mentioned patients. He Beatty et al., CAR is based on murine antibodies, and adverse events are caused by scFv-specific IgE antibodies in CAR (ie, human anti-mouse antibody (HAMA) response), which subsequently leads to additional injection of CAR-T cells in CRS. These antibodies may be induced by the intermittent dosing regimen of CAR-T cells. After two injections of RNA CAR-T cells on day 0 and before day 7, a third injection was performed after a long waiting period on day 49. This is enough to complete the isotype conversion from IgG to IgE. Therefore, if a HAMA response is induced, rapid repeat infusion seems to be the best way to prevent isotype switching.

Although if CAR-T cells induce a targeted/non-tumor response, transient expression of CAR on the cell surface of T cells by mRNA electroporation may be an advantage, but it may also be a disadvantage of applicability. The infusion must be carefully monitored. Whether CAR-T cells reach their tumor targets in time before the expression of CAR is too low to be effective in anti-tumor response. This may be circumvented by local infusion of these CAR-T cells at the tumor site, as it has been carried out in multiple clinical trials (NCT01355965, NCT01897415, NCT03608618, NCT01837602).

A summary review of all clinical trials that use CAR-T cells to treat solid tumors registered with clinicaltrials.gov shows that the use of many different CAR structures, application pathways, and the introduction of additional functions of T cells follow many strategies. This may indicate that an ideal strategy for the treatment of solid tumors with CAR-T cells has not yet been found. This can also be seen in the clinical results of the trial that reported this; only 52 of the 375 patients responded. Nevertheless, the use of CAR-T cells to treat solid tumors contains huge opportunities, and further development and clinical testing are needed to meet the high medical needs for the treatment of such cancers.

In the 42 clinical trials that use CAR-T cells to treat solid tumors registered in clinicaltrials.gov, the clinical results can be retrieved from clinicaltrials.gov or through the literature search on pubmed.ncbi.nlm.nih.gov (see Table S1; also Including data on the number of injected cells, trial stage, (estimated) number of patients, trial status, main investigator, and references), some clinical results were found in the abstract of the ASCO conference published in the Journal of Clinical Oncology. Among the 375 patients treated in the publication reporting clinical results, 13 had complete remission, 35 had partial remission, 4 had mixed remission, 121 had stable disease, 109 had disease progression, and 8 had no evidence of disease. 5 cases were not evaluable, and the clinical results of 80 patients were not disclosed.

A total of 28 clinical trials described in this review also reported adverse events (Table S1). Adverse events are very diverse (Figure 5). Some adverse events are very local, which can be explained by observing the location of the tumor (for example, seizures in the treatment of glioblastoma, or abdominal pain in the treatment of liver tumors). However, there are more common adverse events, such as fever, fatigue, nausea/vomiting, respiratory toxicity/dyspnea, etc. (Figure 5). Although only five clinical trials directly reported serum cytokine release or cytokine release syndrome (CRS) (Figure 5), this may be an underestimation. For acute lymphoblastic leukemia (ALL), it has been described that 77% of patients receiving CD19-CAR-T cell therapy have widespread CRS.

It is reported that in these patients, the clinical manifestations of CRS include mild fever with headache, myalgia and other symptoms, but there are also symptoms such as high fever, low blood pressure, acute respiratory distress syndrome, diffuse intravascular coagulation, organ failure, and death. . In addition, it also describes the increase in C-reactive protein (CRP) and IL-6 values, as well as signs of multiple organ failure, coagulation parameter disorders, and cytopenias. The adverse events listed in Figure 5, as well as all the reported adverse event data summarized in Table S1, and the description of CRS symptoms in ALL patients indicate that more cases of cytokine release syndrome are caused by CAR-T cells. Solid tumors. 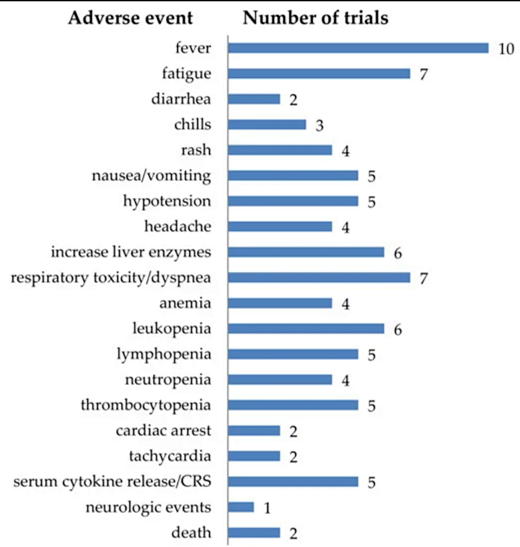 Another adverse event of CAR-T cell therapy is CAR-induced neurotoxicity. However, the mechanism of this neurotoxicity is unclear. Symptoms of toxicity include transient cognitive impairment, hallucinations and delirium, as well as encephalopathy and seizures.

Therefore, the above-mentioned treatment of seizures in patients with glioblastoma (NCT02209376) may also be a sign of neurotoxicity. In addition, one trial described a neurological event (NCT00730613), while in another trial, one of the adverse events was an olfactory aura (NCT02208362), both of which may indicate neurotoxicity.