CAR-T cell therapy: 60% of patients are still in remission after 5 years!

Chimeric Antigen Receptor T Cell Therapy (CAR-T) is not unfamiliar to everyone. Not only has it undergone 25 years of development, it has also been approved for clinical use since 2017, and its indications are becoming more and more extensive. This technology is in the 2.5-line treatment position in the treatment of lymphoma,That is, patients who cannot achieve complete or partial remission after second-line rescue treatment may consider CAR-T treatment, So it has gradually become one of the treatment methods recognized by everyone.

According to experts from Cancer Free Homeland, the basic principle of CAR-T cell therapy is to extract the patient’s own key immune cells-T cells, and embed it with a chimeric antigen receptor (CAR) that can recognize tumor cells. At the same time as the surface antigen, T cells are activated to kill tumor cells. For example, if the T cell is an “ordinary army”, then the CAR-T cell is a “special force” with GPS, which can accurately locate and annihilate the “enemy army”, that is, the tumor cells. , To achieve targeted therapy for patients. At present, the technology has reached the domestic leading and international first-class level. 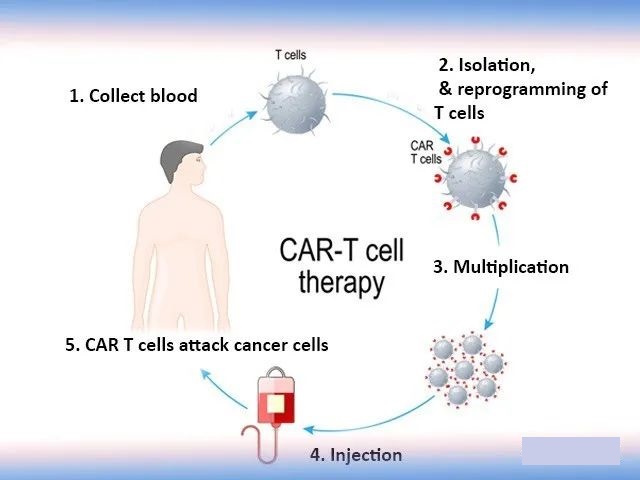 As for the efficacy of CAR-T therapy, a long-term study published in the New England Journal of Medicine today shows that the CAR-T therapy Kymriah developed by Novartis has shown positive efficacy in long-term follow-up studies. The editor will introduce the results of this research in detail for cancer friends!

On February 19, 2021, the results of a long-term study published in the New England Journal of Medicine showed that 60% of the included B-cell lymphoma patients were still in remission after receiving CAR-T therapy Kymriah for 5 years period!

This is a clinical trial for patients with non-Hodgkin’s lymphoma (NHL) initiated by the Pennsylvania Medical Institute. The discovery has been approved by the U.S. Food and Drug Administration for the treatment of relapsed or refractory large B-cell lymph so far The longest follow-up data of CAR-T cell therapy for tumors.

At the same time, the researchers evaluated the persistence of CAR-T cells in patients. The study found that among patients whose remission period lasted for more than 1 year, 5-% of patients had no detectable expression of targeting CD19 in the body after 5 years. Transgenic chimeric antigen receptors. Among the 18 patients who relapsed within one year after receiving CAR-T cell therapy, only one patient had undetectable transgenes. This result means that the loss of CAR-T cells may not be a common cause of therapy resistance.

Dr. Elise A. Chong of the study commented, “We found that most patients who have received CAR-T cell therapy in remission lasting more than one year are still in remission after 5 years. This is very exciting, performance Out of the durability of this therapy.

In fact, when it comes to seeing the potential of CAR-T cell therapy for the first time, it should be traced back to the 2020 ASH annual meeting. From December 5th to 8th, 2020, the largest international conference in the field of hematology in the United States-ASH Annual Meeting will be held in the form of an online virtual conference. At this ASH annual meeting, many research advances in CAR-T therapy, which have attracted much attention in the field of malignant hematological tumors, were disclosed.

At this meeting, announced Patients with refractory large B-cell lymphoma were followed up for ≥ 4 years after a single Yescarta infusion (median follow-up time was 51.1 months), and the estimated four-year overall survival rate was as high as 44%! This reliable and favorable data is quite convincing for the curative effect of CAR-T cell therapy!

Analysis of blood samples provided by 21 patients who received Yescarta treatment and showed sustained response during at least 3 years of follow-up showed that CAR gene-marked B cells and polyclonal B cells can be detected in 67% of the patients. In addition, it can be assessed that 91% of patients have normal B cells.

These results indicate that After receiving treatment, the patient can still restore normal immune function, further confirming the long-term safety of the treatment——Because CD19 is a target of all B cells, CD 19CAR-T cells can kill all B cells. The reconstruction of B cells means that the human body can restore the corresponding immune function. After all, B cells are important in human immunity. One of the members.

“According to the first 4-year data of an important lymphoma CAR-T clinical trial, it can continue to show the potential long-term survival of Yescarta in relapsed/refractory large B-cell lymphoma, and break through the possibility of CAR-T therapy. “The limitations of Kite’s clinical development,” added Dr. Takeshita, the global head of clinical development at Kite. “It is especially important that we are greatly encouraged by the results of this long-term survival. Since Yescarta was first launched, there have been thousands of patients. Received treatment and brought hope of survival to many patients with hematological malignancies.”

Dr. Carl June, a pioneer of CAR-T therapy, once interpreted CAR-T cell therapy into two parts in an interview:
T cells (T lymphocytes) play the role of “warriors” in the human body and are responsible for resisting and eliminating “enemy” such as infections, tumors, and foreign objects.

T cells are activated through genetic engineering technology and installed with a “positioning navigation device” CAR, which specifically recognizes tumor cells in the body, and releases a variety of effectors through immunity to effectively kill tumor cells, thereby achieving the goal of treating malignant tumors. 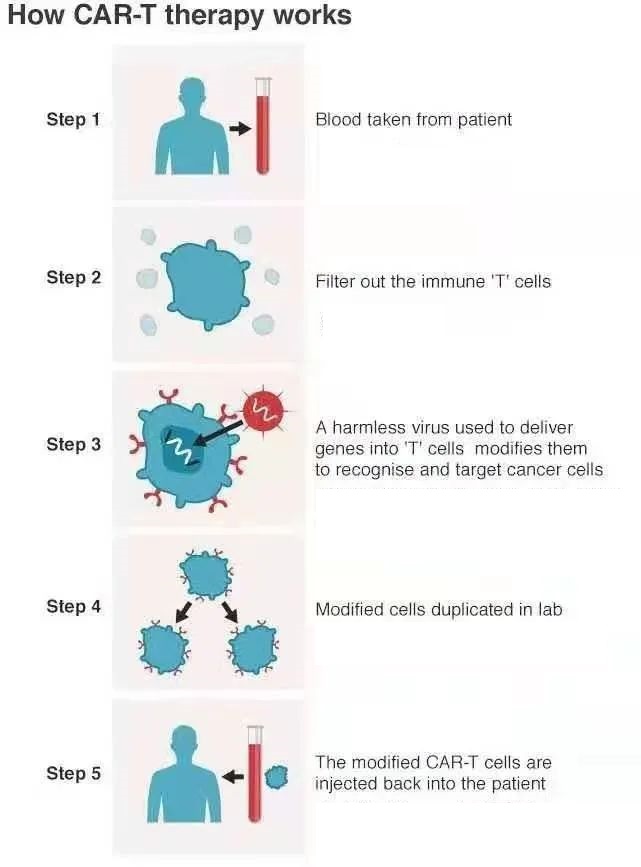 Emily Whitehead, an early recipient of CAR T cell therapy for everyone, celebrating 8 years of cancer-free.jpg

CAR-T cell therapy is the first cell and gene therapy. Although research in the field of solid tumors such as thyroid cancer and breast cancer has not been smooth, it has shown positive results in clinical trials for the treatment of tumors such as leukemia, lymphoma and myeloma, especially for advanced leukemia.

“Within 5 years, all hematological tumors should be cured by CAR-T therapy.” Carl June said.

The emergence of CAR-T cell immunotherapy has given the majority of cancer patients hope. Cellular immunotherapy represented by CAR-T therapy will be the hottest field in the global biopharmaceutical industry in the next 5 to 10 years.

The expert believes that in the near future, more and more clinical trial data will continue to emerge. CAR-T therapy will not only shine in the field of hematological tumors, but also increasingly demonstrate its hidden strength in solid tumors!