Why is it better to use your own cells for CAR-T cell therapy?

Nature: Why is it better to use your own cells for CAR-T cell therapy? Are CAR-T cells better than autologous T cells or allogeneic? The latest research of the “Nature” sub-issue gives the answer. As an innovative immunotherapy technology, CAR-T cell therapy has been known for its ultra-high initial remission rate from the very beginning. Basically, most advanced cancer patients (hematological tumor patients) receiving treatment can achieve effective remission. This data can reach more than 90%, and according to the latest 5-year long-term follow-up data of CAR-T cell therapy published in “NEJM”, the patient’s sustained remission can reach 58% or even 60%. This is for patients with advanced hematological tumors. It has to be said that it is quite gratifying data.

Compared with autologous CAR-T cells, T cells in allogeneic CAR-T cells are often donated by healthy donors, so they can be prepared in advance and stand by at any time, thus ensuring the timeliness of treatment and saving part cost. So is it feasible to use allogeneic T cells to prepare CAR-T cells for treatment? Is it really more advantageous than CAR-T cells prepared from autologous T cells? 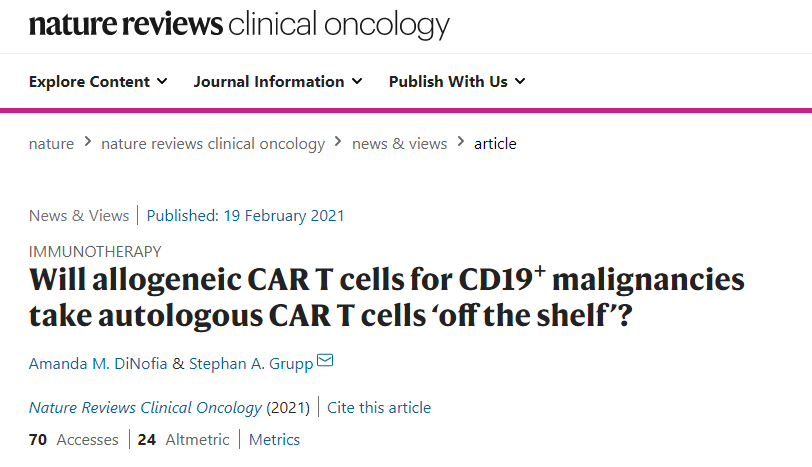 First of all, the first point is naturally indisputable: comparison of efficacy. According to the first-stage multi-center allogeneic CAR-T clinical trial data made by Benjamin et al., the data of the allogeneic CAR-T clinical trial of 7 pediatric patients and 14 adult patients showed that the overall response rate of patients It was 67%, and the median sustained response time was 4.1 months; at 6 months, the progression-free survival rate was 27%, and the overall survival rate was 55%. As we mentioned earlier, the initial overall response rate of most autologous CAR-T cell treatments can reach about 90%, and the 5-year sustained remission rate is 58% (data from patients with diffuse large B-cell lymphoma). According to this data, the effect of autologous CAR-T cell therapy is a bit higher. In addition, there is also a very important point is the burden of treatment-we must know that the human body is highly exclusive, which is also one of the functions of the immune system, which is to remove the “foreign” substances that enter the human body, the foreign CAR- T cell is a “foreign body”. Therefore, when infusing allogeneic CAR-T cells, the patient needs to undergo more intense lymphatic dissection to reduce rejection. Therefore, this is also a problem for the patient’s own body. Not a small burden of treatment.

In general, allogeneic CAR-T cell therapy has developed rapidly in recent years, but there is still a certain gap compared with autologous CAR-T cell therapy. CAR-T cell therapy technology is also constantly advancing. I believe that with the progress of immunotherapy principles and clinical research, we will hope to see a better cancer treatment landscape.