In recent years, the incidence and mortality of pancreatic cancer have increased significantly. The early diagnosis rate of pancreatic cancer is not high, and it is often at an advanced stage when discovered. At this time, cancer cells have spread and are difficult to treat. The 5-year survival rate is less than 7%, which is the most prognostic Poor malignant tumors, so it is also called “the king of cancer.”

The study shows that genetic engineering of T cells to make them highly express CXC chemokine receptor 6 (CXCR6) can enhance the recognition and lysis of pancreatic cancer cells by T cells, thereby enhancing the effect of cancer cell therapy. 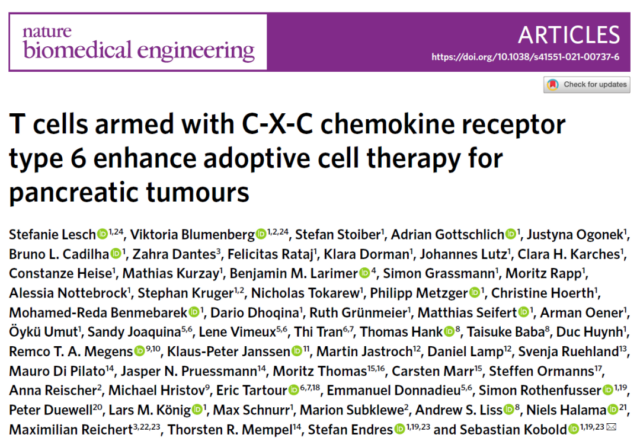 In recent years, more and more researches have explored the possibility of CAR-T cell immunotherapy to fight cancer, trying to genetically engineer immune cells to induce them to attack tumors, and many results have been achieved.

For CAR-T therapy to work, first T cells must be able to reach the tumor, and then the tumor can be killed. Tumor cells in the pancreas are usually covered by stromal tissue, so it is difficult to kill them with drugs.

There is no such problem with immune cells, but previous studies have shown that tumors in the pancreas express CXC chemokine ligand 16 (CXCL16). CXCL16 attracts non-T cell immune cells that cannot attack the tumor. The presence of these cells will interfere T cell immune cells capable of launching an attack.

In both cases, the engineered T cells showed sustained anti-tumor activity and improved the survival rate of mouse models of pancreatic cancer. Encouraged by the results of these experiments, the research team has begun to use this method in clinical trials.