TILs therapy uses its own cells to kill tumors

We often see cases of treatment of various advanced cancers in the literature, especially many patients with advanced malignant tumors can achieve “clinical cure”. After being surprised, we have to say that immunotherapy technology has benefited more and more patients.

Here I want to explain in particular that clinical cure does not mean cure, nor does it mean the disappearance of cancer. It includes two aspects: one is that cancer cells cannot be detected after treatment, that is, “complete remission” in medical terms, and the other is that there is no recurrence after complete remission!

At present, there are indeed many advanced cancer patients who have been clinically cured through cellular immunotherapy, constantly creating miracles of prolonging survival! Today I will start with the anti-cancer story of a positive and optimistic Benin Field who calls himself the “Queen of Cancer”.

Benin Field’s anti-cancer experience can be described as ups and downs. Six years after Moffett’s initial melanoma diagnosis and treatment, her cancer recurred again in 2012!

The situation is a bit bad. She has abdominal pain and weakness, and needs emergency surgery to prevent internal bleeding caused by the metastatic melanoma corroding from the stomach to the pancreas.

When she learned that the cancer had recurred, she was unwilling to receive too much chemotherapy, and the rest of her life began to be calculated on a monthly basis.

Since then, she decided to learn more about a clinical trial proposed by surgeon Amod Sarnaik-TILs therapy. “My only choice is to die or try this new type of therapy. Thankfully, I did it because I’m still here!”

The first choice for this clinical trial is to surgically remove some of the patient’s tumors to obtain cells. In the laboratory, the tumor tissue is divided into several small pieces, and each sample is immersed in a mixture mixed with high-dose IL-2 (Interleukin 2), which is a naturally occurring protein that can promote the growth of immune cells. As a result, the tumor in each sample died, leaving only T cells. Several surviving T cells from each sample were tested to see that they responded most strongly to the tumor.

“The best cancer killers are multiplied and then injected into the body in large quantities, which I call ‘
80 billion superheroes
‘It is hard to imagine that they are attacking my cancer cells! “Field said excitedly after the treatment.

Although there were some side effects during her treatment, most of them were temporary and reversible. The best news for Field is that within 3 months of treatment, an abdominal scan showed that her pancreatic cancer was shrinking. After 1 year of treatment with TILs, her body has no signs of disease! Even so, she will have a scan every 6 months.

Her surgeon Dr. Sarnaik said with emotion: “If TILs were not treated, she would never stay here. I just hope it will be effective for everyone. This is my wish!”

The therapy that Field benefits from is TILs therapy. In layman’s terms, this cellular immunotherapy is to separate and purify the lymphocytes in the surgically removed tumor tissue, select the lymphocytes that can specifically anti-cancer, and then expand and activate them for infusion . This type of therapy has a history of more than 30 years and was first used for malignant melanoma.

The DCR is as high as 80.3%, and the follow-up time is extended to 28.1 months. TILs therapy is expected to be available this year!

At the 2021 AACR meeting that just came to an end, it was reported that autologous tumor-infiltrating lymphocytes can produce a long-lasting response in pre-treated advanced melanoma, that is, the innovative therapy based on TILs cells, LN-144 (Lifileucel), has shown positive results. After more than 28 months of follow-up for patients with advanced melanoma, the median response duration has not yet been reached. Once this result was issued, it caused a sensation again!

These patients basically have exhausted their treatment options clinically, and 42% of patients who have entered the very advanced stage even have liver or brain metastases.

The effect of this TILs therapy is really surprising, especially for patients who have progressed after PD-1 treatment and have no better treatment options. 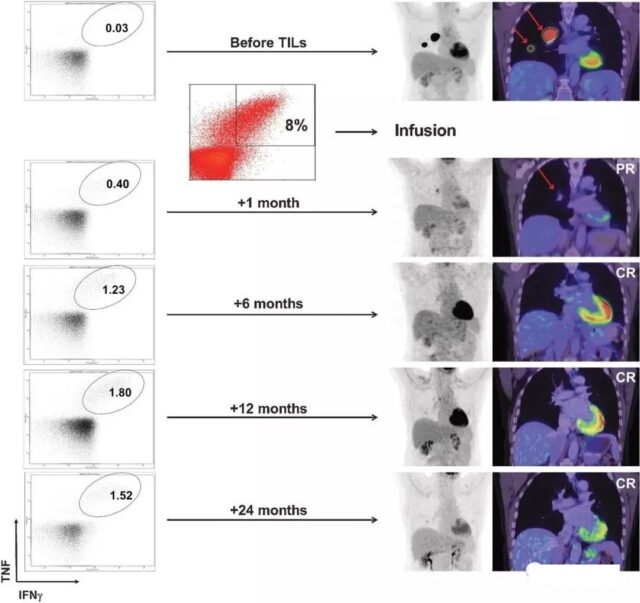 The clinical effect of TILs therapy combined with Vimurafinil in the treatment of metastatic melanoma should not be underestimated. In a clinical trial conducted in 2017, objective clinical responses were observed in 7 of 11 patients (64%), of which 2 (18%) patients (patient 1 and patient 5) had a complete remission.

After patient 1 received the initial 9.27×10^10 treatment with Vimurafinil, TIL, and 5 doses of IL-2, multiple subcutaneous masses on the patient’s left thigh were significantly reduced. After TILs treatment, the metastasis continued to shrink and disappeared completely within 12 months (Figure 1B). 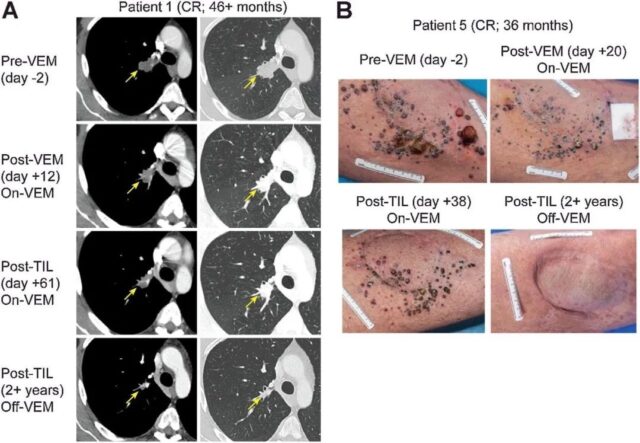 A: Tumor computed tomography images before and after treatment with TILs and Vimurafinil (pointed by the arrow);

B: Tumor photos before and after treatment with TILs and Vimurafinil

No recurrence in 9 years, TILs therapy is very effective in treating melanoma!

In 2011, the Netherlands Cancer Institute (NKI) launched a phase I/II feasibility study for TIL in the treatment of metastatic melanoma to evaluate the feasibility and clinical effectiveness. The relevant results were recently published in the Journal for immunotherapy of cancer. .

A total of 10 patients received treatment, Five cases showed obvious clinical response, including two patients who had a complete remission and continued treatment for more than 7 years. One patient had stable disease for more than 2 months, and the remaining 4 showed progressive disease.

Among them, patient 3 with the best treatment effect was a 46-year-old male with BRAF V600E mutation-positive melanoma, accompanied by lymph node metastasis, liver metastasis, and left adrenal gland enlargement.

During the treatment of verofenil, the patient’s liver metastases completely disappeared, but lymph node metastasis progressed. He was subsequently treated with ipilimumab, but showed progressive disease after 4 courses. At the time of study entry, the patient showed large metastases in his right upper leg, as well as lymph node metastasis, adrenal enlargement, but no signs of liver, lung, or brain metastasis. After that, the patient received 19.6×10^10 TIL, followed by 4 large doses of IL-2, and complete remission was achieved 12 weeks after TILs infusion.

After TIL treatment, the patient remained disease-free for more than 9 years. The waterfall chart below shows the best response of 10 patients, among which the picture of patient 3’s leg tumor gives the strongest proof of the efficacy of neoantigen TILs. 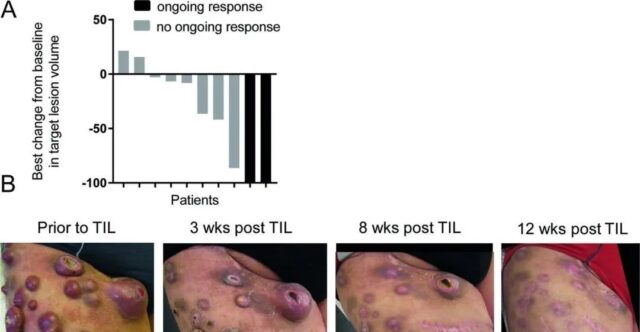 In June 2019, the FDA approved the tumor infiltrating lymphocyte (TIL) treatment method LN-145 as a breakthrough treatment designation.