TILs therapy is called tumor-infiltrating lymphocytes . To put it simply, it is to separate and purify the lymphocytes from the surgically resected tumor tissue, select the lymphocytes that can specifically anti-cancer, and reinfuse after amplification and activation.

To put it simply, it is to separate and purify the lymphocytes from the surgically resected tumor tissue, select the lymphocytes that can specifically anti-cancer, and reinfuse after amplification and activation. This type of therapy has a history of more than 30 years and was first used for malignant melanoma. In recent years, it has given good data in various solid tumors such as cervical cancer and lung cancer. 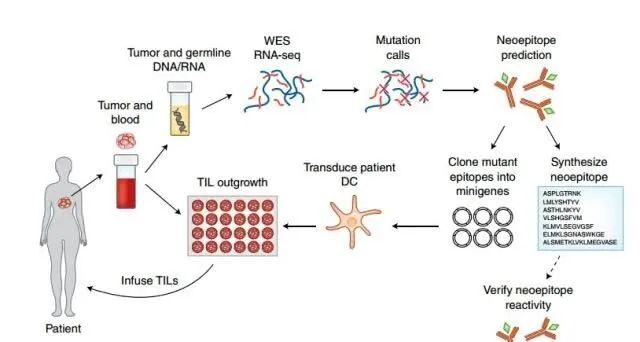 At the ASCO meeting last year, the clinical results of the innovative therapies LN-145 and LN-144 (Lifileucel) based on TILS cells in the treatment of cervical cancer and melanoma have attracted widespread attention in the medical community. TIL therapy has the potential for complete response (CR) that lasts for decades. This long-term effect is attributed to the persistence of memory T cells.

Today, I specifically found some relevant clinical cases about TILs in the treatment of various types of cancer, for your reference, and hope to bring you more hope of survival!

In 2013, Celine Ryan unfortunately suffered from colon cancer. After receiving radiotherapy and chemotherapy, the cancer continued to recur, and the cancer cells metastasized to the lungs, and 7 tumors grew. In desperate circumstances, Celine participated in a clinical trial of the National Cancer Institute in the United States. The clinical trial was in charge of the world-renowned oncologist Professor Steven Rosenberg. Picture 2.webp.jpg Ryan and his family photo, the third from the left is Ryan

The next step is the most critical part. The researchers extracted tumor-infiltrating lymphocytes from fresh tumor tissues, separated different types of T lymphocytes in a proprietary GMP facility and expanded them, generating hundreds of billions of cells in three weeks. TIL. At the same time, Dr. Rosenberg sequenced Ms. Ryan’s tumor tissue to see if there was a genetic mutation, and found that Ms. Ryan had a KRAS G12D mutation.

The researchers further screened and extracted CD8 + T cells that can specifically recognize the mutant KRAS G12D. These cells are the most powerful immune cells that can accurately kill Ms. Ryan’s tumor cells. After that, the researchers expanded and cultured these precious cells, eventually reaching 148 billion.

In the following 9 months, 6 of the 7 tumors in Celine’s lungs shrank significantly and eventually disappeared. The last tumor that did not respond to treatment was removed by the doctor through surgery. Today, no cancer cells can be detected in her body.

This case was also published in the internationally renowned medical journal “New England Journal of Medicine” in 2016. Although the current TILs therapy has achieved good results in solid tumors, it has to be said: This therapy has eliminated all 7 specialized lung lesions in patients with fatal advanced KRAS mutation colorectal cancer, which is truly amazing! 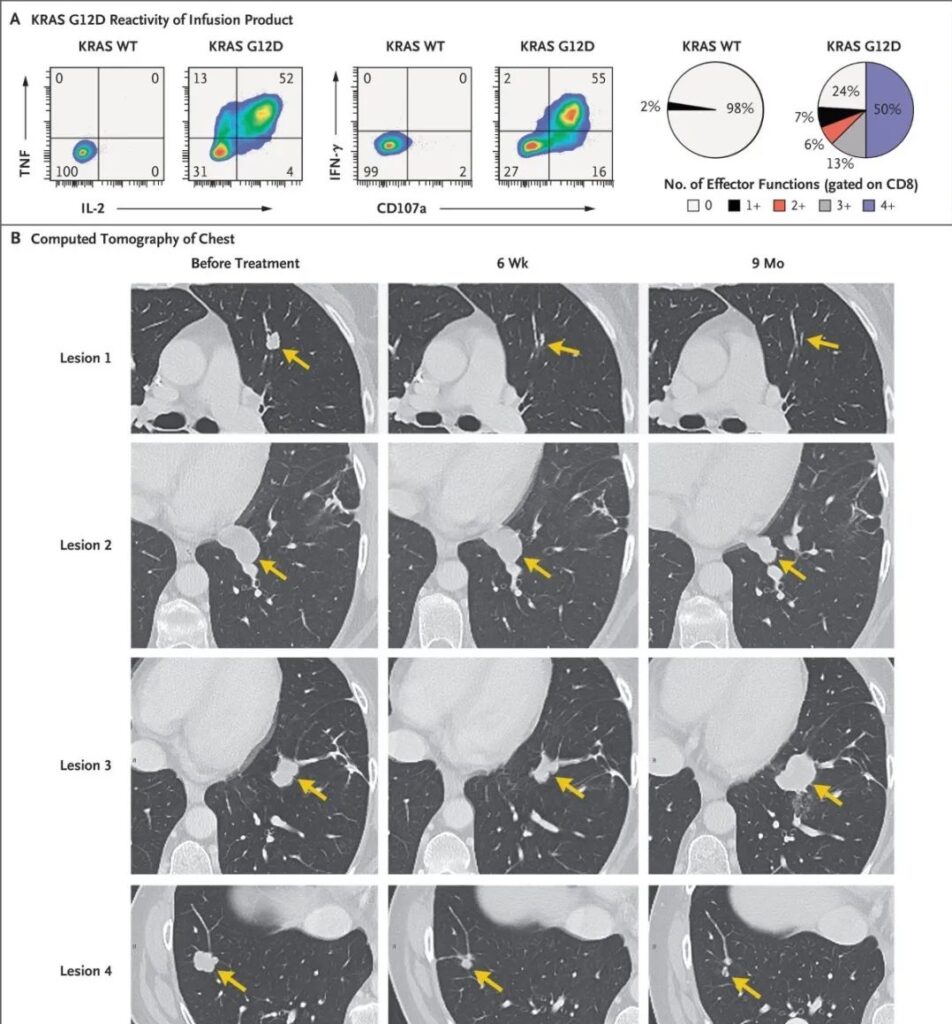 In 2015, 49-year-old Judy Perkins was an ER+/HER- advanced breast cancer patient who had received standard treatments such as chemotherapy and endocrine, but all were resistant and had multiple metastases throughout the body.
In view of the seriousness of the disease, there is no way to treat it by conventional methods, so the doctor predicts that she can only live up to 3 months. Earlier, she had also received clinical trials of immunotherapy.

The researchers found tumor-infiltrating immune cells in her tumor. After isolating these immune cells, the scientists decided to amplify them in large quantities and then return them to the patient’s body.
A week later, Judy Perkins felt a noticeable change in his body. For example, the tumor on her chest felt gradually shrinking. After another week or two, the tumor in the chest cavity disappeared.

In addition to the colorectal cancer patients mentioned above.

Cholangiocarcinoma: The first super survivor to receive TIL therapy has successfully crossed 10 years

2009 was unforgettable for Melinda Bachini. On the day of her son’s 14th birthday, she was diagnosed with a rare bile duct cancer.

Dr. Steven Rosenberg of the National Cancer Institute of the United States unfortunately told her that when the survival period was only a few months, she felt as if she had fallen into an ice cave.

However, life will always experience great ups and downs. The amazing thing is that she is now not only promoted from a mother of six children to a grandmother, but also a survivor of advanced cholangiocarcinoma for more than ten years!

This blessing was all due to her participation in the latest immunotherapy clinical trial developed by Dr. Steven Rosenberg’s team in the United States. In the trial, the research team used highly personalized tumor infiltrating lymphocyte TILS therapy to cure Melinda Bachini’s tumor. A major breakthrough was reported in the “Science” magazine, and her anti-cancer experience has also brought confidence to countless patients.

(Related article: In-depth science! The latest research progress and recruitment information of immunotherapy based on autologous tumor infiltrating lymphocytes (TIL)!)

In fact, TILs therapy is particularly unique, which is very different from general cellular immunotherapy, and is considered “tailor-made” for patients.

This new type of therapy is not simply amplifying and reinfusing, but to determine the specific mutations in the patient’s case, then use the mutation information to find the T cells that can most effectively target these mutations, and finally extract the T cells that are specifically mutated in the patient’s tumor. Cells, these cells have the ability to accurately identify cancer cells.

These immune cells are cultured in vitro and then reinjected into the patient. At the same time, the research team used the immune-enhancing drug interleukin 2 and another “star anticancer drug” PD-1 inhibitor Keytruda. Keytruda is another immunotherapy immune checkpoint blockade, which is used in some cancers. Has a significant effect.

(1) Obtain the patient’s tumor tissue mass, which is mixed with large tumor cells and small and round T lymphocytes;

(2) Different types of T lymphocytes are cloned on the cell plate, and a high concentration of IL-2 is added to select and culture;

(3) Under the stimulation of IL-2, different types of T lymphocytes have been cloned and expanded to form cell populations;

(4) Use the patient’s tumor cells and the amplified T lymphocytes to react, and all T lymphocytes that can have a tumor killing effect are left as positive TIL groups (red), and the rest are discarded;

(5) Use dendritic cells (DC) loaded with tumor-specific antigens to further expand and cultivate tumor-specific TIL; finally, return to the tumor patients who have been myeloablized in advance.

At present, this new type of immunotherapy is not yet on the market, but a number of clinical studies on various solid tumors (non-small cell lung cancer, colorectal cancer, ovarian cancer, melanoma…) have been carried out worldwide. If you want to know more, please continue to pay attention to the cancer-free home website (400-626-9916).
I have something to say

In recent years, scientists have made considerable efforts to develop new cellular immunotherapy to overcome the obstacles of solid tumors. We look forward to the fact that more and more pre-clinical/clinical trial data can piece together a complete puzzle, fully demonstrating the true power of TILs cell therapy in treating many solid tumors.