Nature: Global cancer cell therapy research and development pipeline summary.  Cancer cell therapy belongs to immunotherapy. It is through the transformation of autologous or foreign immune cells in vitro and infused back into the patient’s body, thereby enhancing its killing effect on cancer cells, and then treating cancer. Current cancer cell therapy includes CAR-T, TCR-T, CAR-NK, TIL, CTL and so on.

Cell therapy represented by CAR-T has become one of the most significant breakthroughs in the field of cancer treatment in recent years. As of April 16, 2021, there are a total of 2073 active cell therapy drug R&D pipelines worldwide, an increase of 572 over the same period in 2020, a growth rate of 38%. 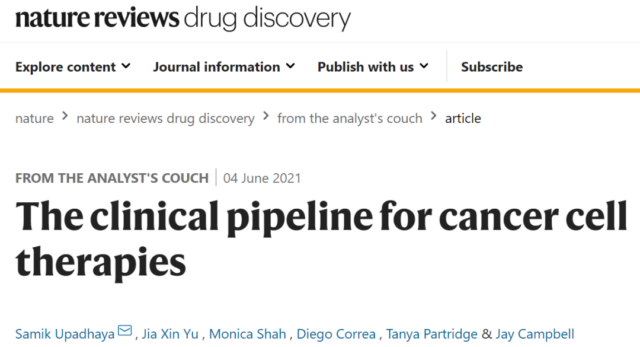 In different types of cell therapy, CAR-T continues to dominate, adding 299 new CAR-T drugs, an increase of 35% over the same period in 2020. Most CAR-T therapies (80%) are in the preclinical and clinical phase I stages. 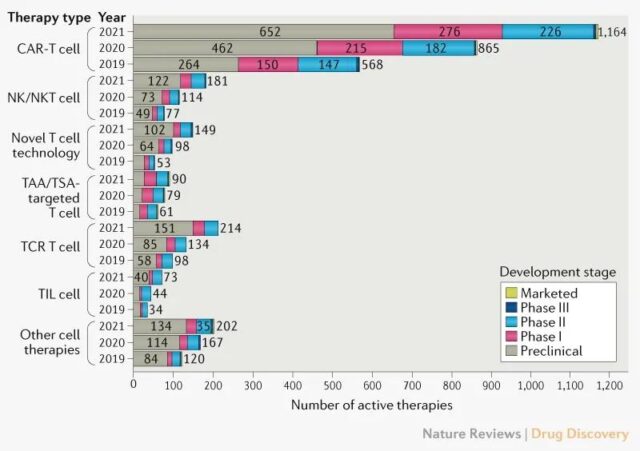 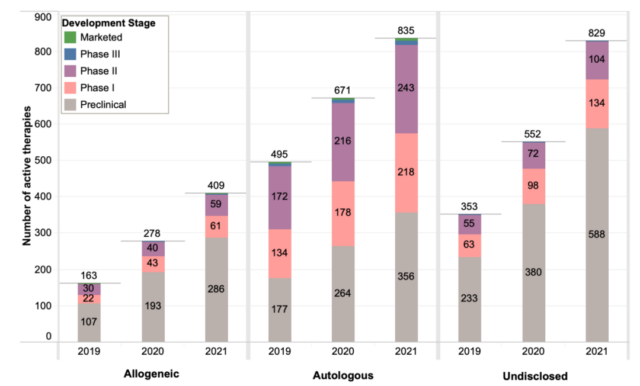 For cancer cell therapy targets, CD19, BCMA, and CD22 are still the most studied targets for hematological cancers, but the growth rate (15%, 23%, and 56%, respectively) compared with the previous year (51%, respectively) 83% and 80%) have slowed significantly. 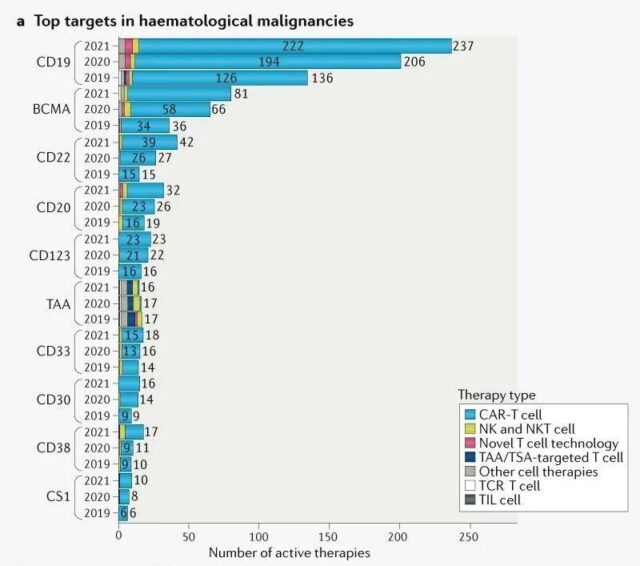 The main target of cell therapy for blood cancer

Solid tumors have always been a difficult point in cancer cell therapy. The target of solid tumor cell therapy has not changed much. The undisclosed tumor-associated antigens (TAA) are the most, followed by HER2, MSLN, GD2, EGFR, and GPC2/3. It is worth mentioning that the GPC2/3 target has grown rapidly since 2019, almost doubling every year, mainly for the treatment of liver cancer. 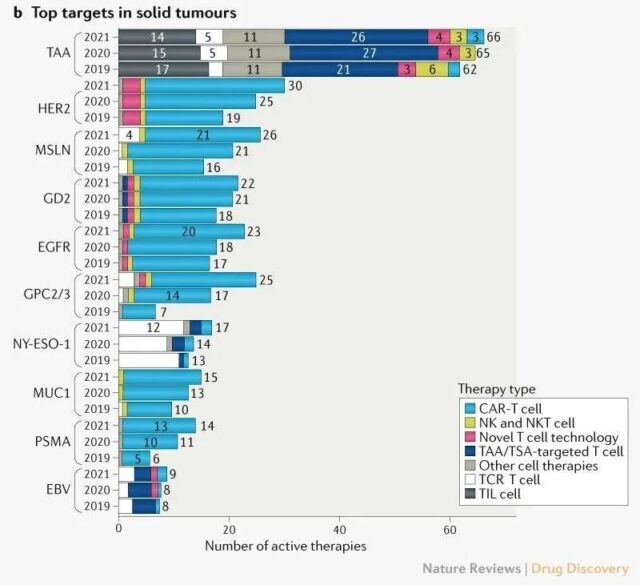 The main target of cell therapy for solid tumors

Most of the growth comes from CAR-T cell clinical trials (increased by 83% since 2019), as well as other types of cell therapies, TCR-T, TIL, etc. After experiencing a sharp decline in 2020, NK/NKT has not yet fully recovered in 2021.

Similar to previous years, most clinical trials of cell therapy focused on hematological malignancies, solid tumors accounted for only 40%, and most of them are in the early clinical stage. This also reflects the inherent challenges of using cell therapy to treat solid tumors. 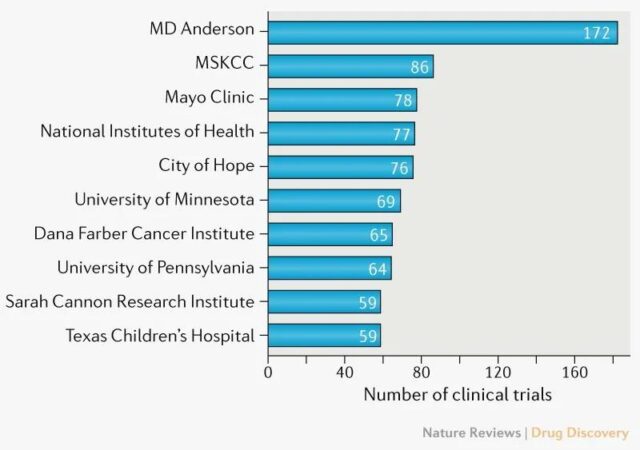 In the United States, most cell therapies are researched and developed by companies, with academia accounting for only 17%. China is more balanced, with 60% from companies and 40% from academia. 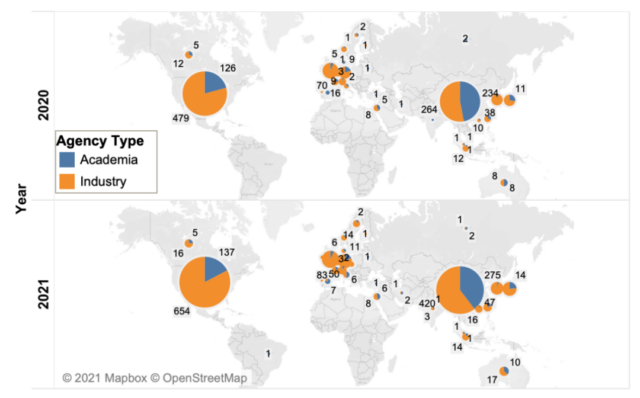 This may reflect the instability of the healthcare system during the initial COVID-19 pandemic, the reduction in the use of more selective therapies, the reduction of relevant medical staff and resources to support CAR-T cell therapy, and the reluctance of patients and medical staff to treat vulnerable cancer patients Exposure to a potentially high-risk hospital environment. 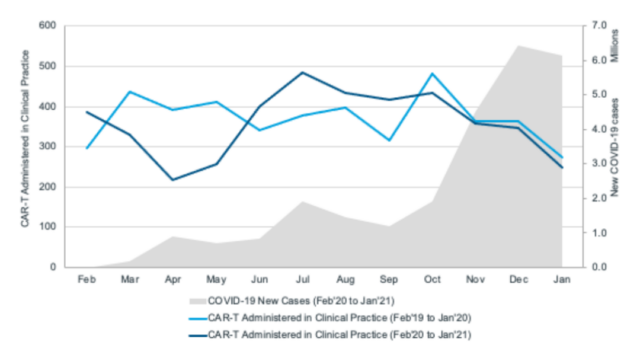 Since the FDA approved the first CAR-T therapy in 2017, 5 cell therapies have been approved in less than 4 years, more than 2,000 cell therapies are being studied, and clinical development is continuing to develop steadily.

In addition, as the world’s COVID-19 epidemic tends to ease, we can foresee a new growth in cell therapy clinical trials.