Global patent landscape of CAR-T cell therapy.   Cancer immunotherapy (immuno-oncology) is a method of treating cancer by activating the immune system. As of March 2020, there are 1,438 cancer cell immunotherapies in progress worldwide, of which chimeric antigen receptor T cell (CAR-T) immunotherapy has the largest increase.

CAR-T is a genetically modified T cell. The T cell is modified by introducing a gene encoding CAR into the patient’s DNA. After the T cell proliferates, it is transfused into the patient’s body to express the CAR, thereby initiating the body’s natural host defense mechanism to target The cells are killed, so as to achieve a stronger ability to locate and attack tumor cells than ordinary T cells.

In 2017, two CAR-T therapies were approved by the FDA for marketing in the United States, and then CAR-T therapies have set off a global boom. Although China started a little later, it has developed rapidly. Recently, Fosun Pharma’s Fosun Kate CAR-T product FKC876 (Akilunza injection) entered the administrative approval stage in some countries, and is expected to become the first batch of CAR-T therapy products in China. Compared with traditional small molecule drugs and antibody drugs, the patent layout of CAR-T technology is more complicated, involving multiple links such as basic research, industrial preparation, and clinical use.

Recently, the Hu Yuanjia team of the University of Macau published an article The global chimeric antigen receptor T (CAR-T) cell therapy patent landscape in Nature Biotechnology. Through patent scanning, a comprehensive analysis of CAR- from the four dimensions of “time-space-organization-technology” T’s global patent layout, for the first time provided the patented technology “aerial image” in this field.

The study first counted the patent holders, and the results showed that the University of Pennsylvania, the pharmaceutical company Bristol-Myers Squibb, and Novartis of Switzerland were among the top three. Among the top 20 patent holders, there was only one Chinese company-Keji Biomedical. Ltd., ranked 18th. At the same time, the paper also counts the status of patent inventors. Carl H. June of the University of Pennsylvania, Martin Pule of University College London and Shaun Cordoba of the British biopharmaceutical company Autolus are in the top three respectively. 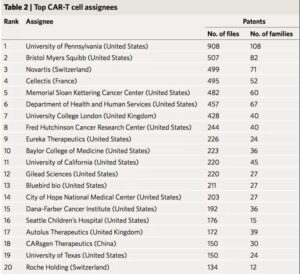 There is cross-regional cooperation among institutions in the CAR-T field. The study drew a global cooperation network map. It can be clearly seen from the map that a strong cooperation network has been formed between several universities and pharmaceutical companies in the United States, which ranks among the world’s leading positions. The countries that are relatively active in Europe are France and the United Kingdom. France has established a cooperation based on the French National Institute of Health and Medical Research and the French National Center for Scientific Research. There are also close cooperative relations between institutions in the United Kingdom. Form a unified internal R&D cluster.

The study pointed out that China’s development in the CAR-T field is not early, but the speed is very fast. Not only did it rely on its huge market size and potential to attract global applications, it surpassed the United States to become the world’s number one patent publication country for the first time in 2016; and in terms of patent ownership countries, China also ranked second in the world in 2017. The United States still has a big gap, but it is far ahead of European countries in number. However, China’s large number of patent right institutions, small scale, lack of cooperation and international layout have resulted in a marginal position in the global R&D network. 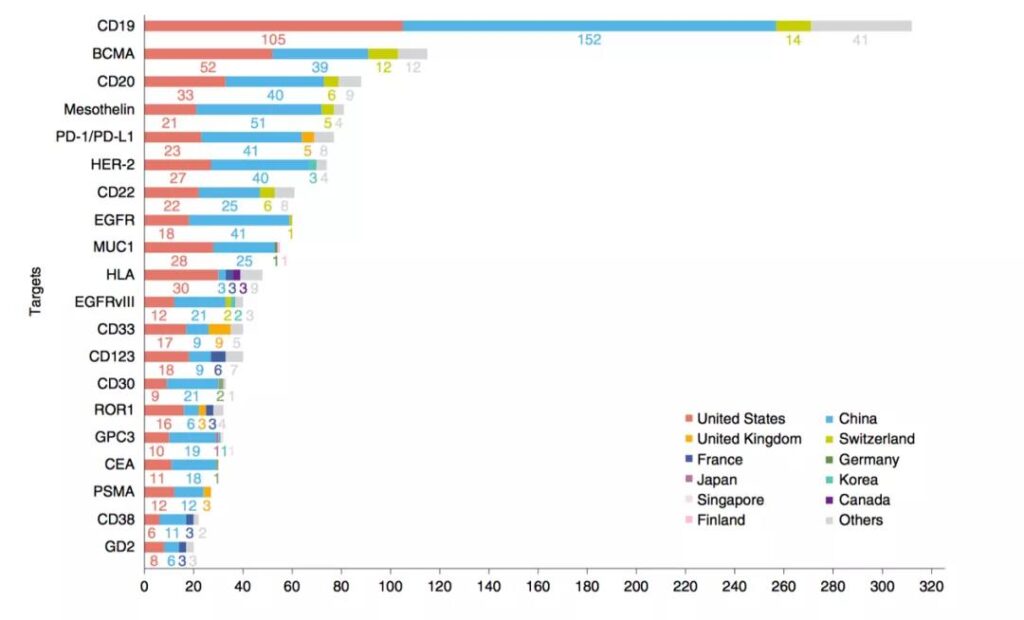 In addition, the research links CAR-T’s global patents through patent citation analysis, forming a citation network with 2,784 nodes and 7057 edges, which visualizes the technological evolution of patents. The patents of Novartis and the University of Pennsylvania dominate the entire network (yellow clusters). These patents involve target discovery, inhibitor binding, bispecific CAR-T development, and other manufacturing processes. 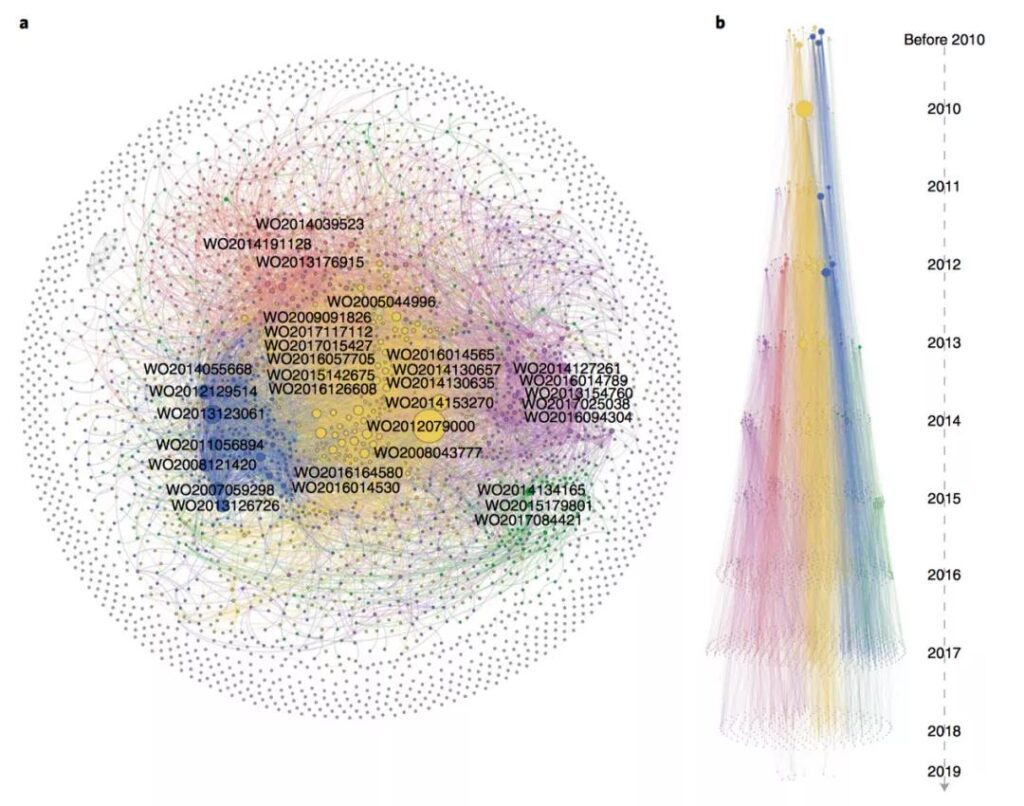 Regular tracking of patent patterns in emerging fields is essential for scientific research and business decision-making. This research provides a methodological basis for a very systematic analysis of patent patterns, including the use of baseline indicators to quantitatively analyze patent activities, from “time-space-organization-technology” “A comprehensive dynamic portrayal of the patent pattern from all angles, etc., provides a good example for subsequent related work.