As a new strategy for the treatment of malignant tumors, they have been extensively studied in clinical trials worldwide. Some of the products have been approved, and most of them are still in the early stages. researching. Therefore, in this field, disputes, opportunities and challenges coexist.

Gene therapy aims to modify or manipulate gene expression or change the biological characteristics of living cells for therapeutic purposes. According to the treatment method, gene therapy can be divided into in vivo or in vitro, according to the gene transfer system can be divided into viral vectors and non-viral vectors. Gene-edited cell therapy belongs to the category of in vitro gene therapy. Cells (normal cells or tumor cells) are taken out of the patient’s body, and the target gene (DNA or RNA) is introduced into the cells cultured in vitro, and then cells with high expression of the target gene are selected for treatment Amplify, and finally transplant it back to the patient to achieve the goal of treating tumors. In vivo gene therapy refers to the direct introduction of target genes into the patient’s cells through a vector. For example, oncolytic viruses (OVs) have good tumor lytic effects, tumor selectivity and high immunogenicity, which are very promising. In vivo gene therapy method. 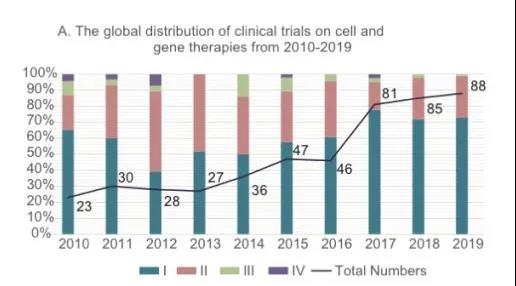 Figure A: Global distribution of cell and gene therapy clinical trials from 2010 to 2019

These trials covered 26 solid tumor types, among which melanoma, non-small cell lung cancer (NSCLC) and ovarian cancer were the three most common (Figure B). 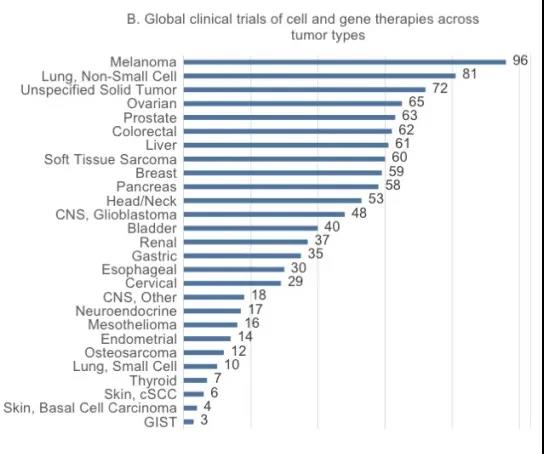 Although China ranks second in the number of cell and gene therapy clinical trials, there is still a big gap between China and the United States, which ranks first. For example, the overall number is 39 in China and 120 in the United States (Figure E). 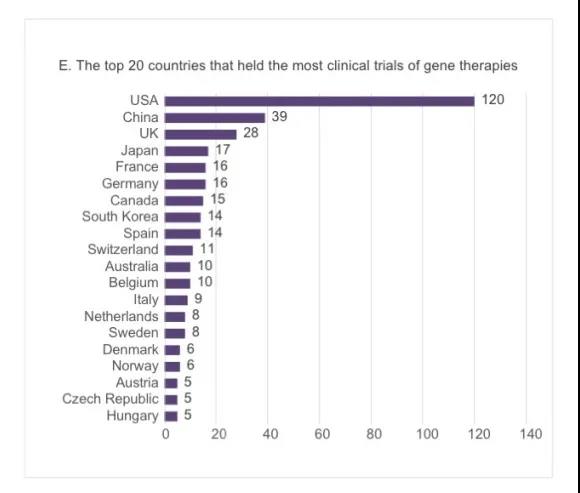 China’s CAR-T and TCR-T trials were 14 and 5 respectively, while the rest of the world (excluding China) had 22 and 16 respectively. The target situation in these experiments is also different in China and other parts of the world. The top 3 CAR-T targets in China and other countries outside China are glypican-3, IL13Rα2/CEA/MUC1 and claudin 18.2/AFP, as well as mesothelin, NKG2D and IL13Rα2/CEA/MUC1; the top 3 targets of TCR-T The targets are China’s NY-ESO-1, HBV and hpve6, and other countries’ NY-ESO-1, individualized tumor-specific neoantigens and MAGE-A4. The high expression of HBV and HPV E6 in China reflects China The regional characteristics of the high incidence of HBV-related liver cancer and HPV-related cervical cancer in the population.

In addition, the clinical realization of cell therapy in China is concentrated in a few large cities, such as Shanghai, Guangzhou and Beijing, followed by Shenzhen, Hangzhou and Nanjing.

Based on the incompleteness of R&D, implementation and related policies, most research on cell and gene therapy in the direction of solid tumors stays in phase I or II clinical trials.

The main challenges are as follows: First, there are few tumor-specific antigens on the surface of solid tumor cells. Second, the antigens of solid tumors have greater heterogeneity. Third, the infiltration of gene-transduced T cells in solid tumors is limited. Fourth, the immunosuppressive tumor microenvironment is a common feature of patients with advanced tumors, and T cell failure is more common. Finally, the clinical trials for biomarker screening are limited, accounting for only 19.2% (61/318) of cell therapy trials and 14.7% (55/374) of gene therapy trials, and it is not possible to early and quickly enrich the population for whom treatment may be effective.

In addition, there are still operational challenges, such as how to simplify the preparation process of cell and gene therapy, and optimize storage, transportation and infusion? How to provide more efficient and relevant training for all parties involved in cell and gene therapy trials?

In the continuous development of cell and gene therapy, there are already some strategies to solve problems, such as optimizing the design of CAR, improving the tumor infiltration capacity of cells, and improving the microenvironment of tumor immunosuppression. In addition, the combined application of different mechanism therapies and cell gene therapy is also expected to further improve the efficacy. At the same time, the development of new manufacturing processes has also promoted the development of cell gene therapy. For example, the production process of the second-generation TILs product requires only 22 days to complete cell preparation, compared to 6 weeks. The second-generation TILs products used to treat melanoma and cervical cancer have accelerated their commercialization in the United States.