The history and current status of KRAS target

The history and current status of KRAS target. The full name of the KRAS gene is the gene Kirsten Rats Sarcoma viral Oncogene Homolog.

RAS is the first human oncogene to be discovered.

At the end of the 19th century, the research of masters such as Pasteur made modern medicine a great success in the field of anti-infection. In 1876, a Russian successfully transplanted tumor tissue from one dog to another. In 1908, two Danish scientists discovered that extracts from hen leukemia cells could infect other birds with leukemia. These observations and studies have led people to believe that tumors are also infectious diseases caused by viruses.

In 1910, Peyton Rous of the Rockefeller Institute discovered the first tumor virus Roussarcomavirus (RSV, Roussarcoma virus) from a hen from Long Island, New York. Since then, a series of RNA and DNA viruses that cause animal tumors have been discovered one after another. The pathogenic mechanism has also been reasonably explained: these viruses (RNA viruses through reverse transcriptase) can integrate tumor genes into infected host cells, induce malignant transformation and maintain the infinite division of tumor cells. PeytonRous, who discovered RSV, and Howard Temin, who discovered RNA virus reverse transcriptase, won the Nobel Prize in Physiology and Medicine in 1966 and 1975, respectively. So far, people are convinced that tumors are diseases caused by viruses.

Until 1974, J. Michael Bishop of UCSF and his postdoc Harold Varmus accidentally discovered through DNA probes that the tumor gene src previously found in the RSV virus was also present in uninfected normal cells. It turns out that tumor genes have long existed in the host’s genome. In ancient times, viruses obtained these gene fragments from host cells and modified them, which means that the tumor genes carried by the virus actually came from our own. These discoveries opened the door to modern tumor biology based on genetic variation. Bishop and Varmus also won the third Nobel Prize in this field in 1989.

After more than 50 years have passed, the RAS gene has been found to be one of the most common mutated genes in tumors. 30% of tumors carry RAS mutations. If the upstream and downstream mutations of RAS regulatory factors and signaling pathways are included, almost all tumors are covered. RAS mutations every year It is the king of tumor genes that caused more than one million deaths. This is also very curious. What magical function does RAS have that makes tumor cells so dependent?

1. The concept of KRAS gene

The full name of the KRAS gene is the gene Kirsten Rats Sarcoma viral Oncogene Homolog.  The protein encoded by the KARS gene is a small GTPase (smallGTPase), which belongs to the RAS superprotein family.

Note: Generally, the KRAS gene and protein studied in the company and literature reports refer to the “KRAS2” gene and its protein product.

The KRAS gene belongs to the RAS gene family. Among the RAS gene family, there are NRAS (neuroblastoma-RAS) and HRAS (Harvey-RAS). HRAS, KRAS and NRAS, located on chromosomes 11, 12 and 1, respectively, are involved in intracellular signal transmission.

There are 2 variants of the KRAS protein. These two variants are due to the fact that exon 4 has two different splicing methods during the splicing process of RNA, resulting in two kinds of mRNA, and then two kinds of proteins (variants) are translated. These two proteins are called “KRAS4A” and “KRAS4B” respectively. The expression level of KRAS4B is significantly higher than that of KRAS4A. In general, KRAS4B is 5 times that of KRAS4A.

3.  The structure and location of KRAS protein

In normal cells, receptor monomers such as EGFR, HER2, ErbB3 and ErbB4 on the cell membrane combine with extracellular ligands to form dimers, which are autophosphorylated and then phosphorylate downstream signal proteins. One of the signaling pathways can activate Grb2-Shc, then activate the SOS protein, and then activate the KRAS protein.

The transition of KRAS between inactivated and activated states is regulated by two types of factors.

The other is GTPase (GTPase) activating proteins (GAPs), which can promote the hydrolysis of GTP bound to KRAS into a GDP terminating active state, thereby inhibiting the activity of KRAS.

a) RAS is a binary molecular switch controlled by the GDP/GTP cycle:

When the KRAS protein is not activated, it is tightly bound to GDP and is in the “off” state; after receiving the signal, the guanylate exchange factor GEFs (SOS) are recruited The cell membrane binds to RAS and releases GDP. After KRAS is activated by the SOS protein, it binds to GTP.

b) The KRAS protein that binds to GTP has the activity of phosphokinase and represents the “on” state, which can further activate downstream proteins.

Note: When there is no stimulus signal, the switching of this off state is very slow. 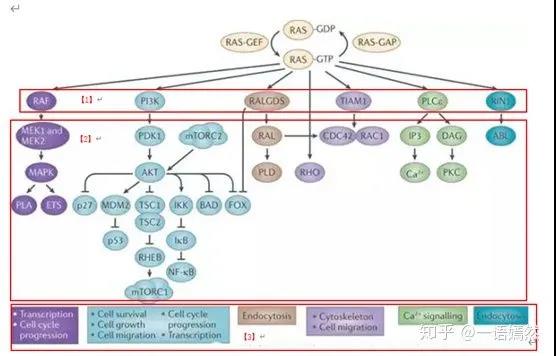 Because RAS is at the center of many important cell signaling networks, they are associated with many cancer markers. The RAS proteins are so named because they were first identified in the study of rat sarcoma caused by a strong carcinogenic virus. RAS is the most frequently mutated oncogene in human cancers. At present, mutation-induced activation of RAS protein has been found in about 1/5 of all human tumors. 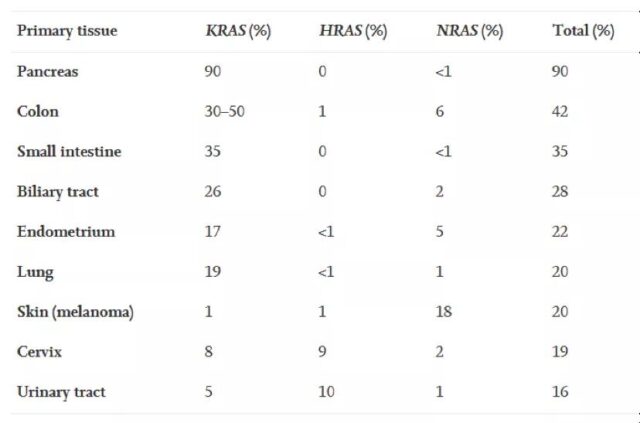 Among KRAS gene mutations, 97% are mutations in the 12th or 13th amino acid residue. The most important ones are the three mutations G12D, G12V, and G13D. Structural studies have shown that most of these gene mutations interfere with the ability of KRAS to hydrolyze GTP.

When KRAS has mutations such as G12D, G12V, and G13D, it will destroy GAP activity. KRAS will continue to bind to GTP, lock KRAS in an active state with tyrosine kinases, and continuously activate downstream signaling pathways (such as PI3K, RAF-MEK-ERK (MAPK), RAL-GEF, etc.). After these downstream signaling pathways are opened, they will stimulate cell proliferation and migration, and ultimately contribute to tumorigenesis.

The relationship between the function of KRAS and tumor treatment

RAS plays a pivotal role in the signal regulation of cell growth. The upstream cell surface receptors such as EGFR (ErbB1), HER2 (ErbB2), ErbB3, ErbB4, etc. [1], after receiving external signals [2], will pass the RAS protein [3] to the downstream [4]. In turn, it stimulates cell proliferation and migration. 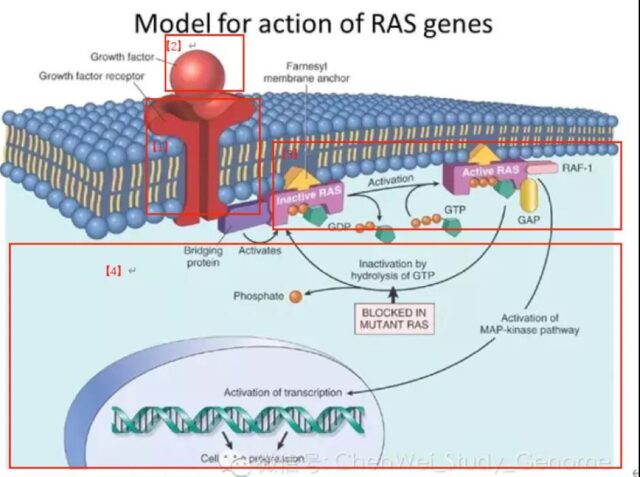 Studies have shown that carcinogenic KRAS gene mutations can not only directly promote the proliferation and survival of tumor cells, but also have an impact on the tumor microenvironment. Carcinogenic KRAS induces and affects the cells surrounding the stroma (such as fibroblasts, innate and adaptive immune cells) in a paracrine manner, which in turn promotes the malignancy of cancer.

Tumor cells with mutations in the KRAS gene can secrete a variety of cytokines, chemokines, and growth factors, including IL-6, IL-8, IL-23, CCL9, hedgehog and so on. These factors can reprogram stroma cells in the tumor microenvironment. For example, IL-6 and IL-8 can maintain the inflammatory phenotype of the stroma in pancreatic cancer and lung cancer. Granulocyte-macrophage colony stimulating factor (GM-CSF) secreted by tumor cells can stimulate myeloid-derived suppressor cells (MDSC) to infiltrate the tumor, thereby inhibiting the anti-tumor immune response.

The effect of KRAS mutation on tumor microenvironment 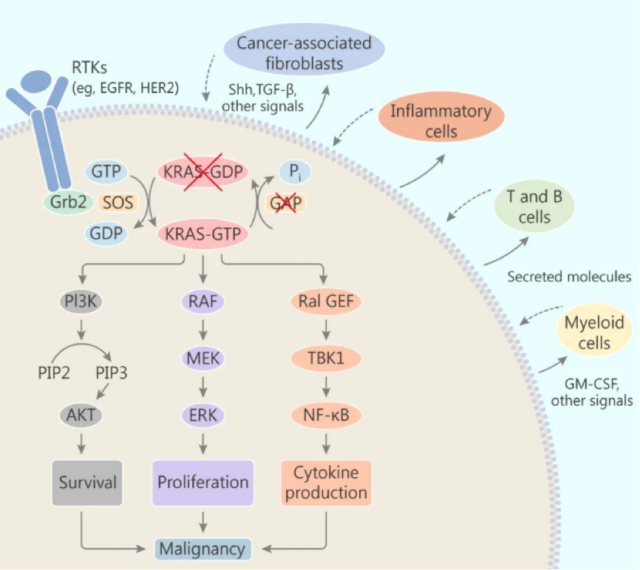 The above-mentioned detection methods for KRAS mutations are based on the principle of real-time fluorescent quantitative PCR method.

Since KRAS is so important and the cancer-causing mutations in the KRAS gene are very clear, why hasn’t a targeted drug that directly targeted the KRAS gene been marketed so far? The reason is that the KRAS protein is a featureless, nearly spherical structure without obvious binding sites, and it is difficult to synthesize a compound that can target binding and inhibit its activity. Unable to conquer for a long time, KRAS has become synonymous with the “unable to drug” target in the field of oncology drug research and development.

2) The currently known active functional domains of KRAS are mainly pocket-like functional domains that combine KRAS with GDP or GTP. Different from the weak affinity between protein kinase and ATP, KRAS binds to GTP or GDP very strongly, and the affinity coefficient reaches PicoMolar (picomolar concentration, 10^-12) level. The concentration of GDP and GTP in normal cells has reached the MicroMolar (micromolar concentration, 10^-6) level. Therefore, the normal concentration of GDP and GTP in the cell is 10 times higher than the concentration required for KRAS binding. However, RAS lacks a large enough pocket that can bind small molecules; therefore, it is very difficult to make a small molecule compound whose binding ability with KRAS can match GDP or GTP.

3) Designing an active drug that only specifically inhibits the mutant KRAS protein, and minimizes the influence on the activity of the normal KRAS protein. This compound is required to have a good selectivity for the mutant KRAS. This is another problem in drug design.

4) However, strategies for indirect targeting of KRAS are also difficult, including blocking KRAS cell membrane positioning and targeting signal molecules downstream of KRAS, such as family members such as RAF, MEK, ERK and PI3K. Specifically, the difficulties of indirect pathways include: (1) RAS is an essential pathway related to normal cell growth and survival. Targeting the essential pathway first faces serious toxic and side effects, resulting in a very narrow or no therapeutic effect index; (2) compensation escape mechanism , And (3) Signal feedback and redundancy due to strict regulation.

In summary, it is the main reason why there is no targeted drug directly targeting KRAS on the market so far.

In addition to these KRASG12C inhibitors that have entered clinical development, Boehringer Ingelheim recently published a study on PNAS that the company has discovered a small molecule inhibitor that can bind to the KRAS protein at the nanomolar level. The “pocket” combined with the small molecule inhibitor of BI-2852 is different from the existing KRASG12C inhibitor. Its binding to KRAS can affect the binding of KRAS to GEF, GAP and downstream effectors. In in vitro tests, this inhibitor can play an anti-proliferative effect in cells carrying KRAS gene mutations. Boehringer Ingelheim plans to develop a more potent and specific KRAS inhibitor based on this inhibitor.

Such as inhibiting the activity of farnes acyltransferase and PDEδ

At present, some compounds targeting farnesyltransferase have been designed, but these compounds have poor tumor inhibition effects in later experiments.

Due to the “non-druggable” nature of KRAS protein, targeting proteins that regulate KRAS activity has become a research direction for indirect targeting of KRAS. GEF can catalyze the binding of GTP to KRAS, so inhibitors that inhibit the function of GEF can indirectly reduce the activity of KRAS. Currently, Boehringer Ingelheim has a SOS1 inhibitor in its R&D pipeline. SOS1 is a GEF that catalyzes the combination of GTP and KRAS.

Another target of interest is SHP2, which is a protein tyrosine phosphatase that regulates the RAS/MAPK signaling pathway. Scientific research has shown that inhibition of SHP2 activity can be combined with other treatments including MEK inhibitors to enhance the killing effect on tumor cells carrying KRAS gene mutations. Novartis and RevolutionMedicines both have SHP2 inhibitors in clinical development. Novartis has also recently reached a cooperation agreement with Mirati to test the effect of the company’s SHP2 inhibitor TNO155 in combination with Mirati’s KRASG12C inhibitor MRTX849.

The two effect pathways that have attracted the most attention are the RAF-MEK-ERK mitogen kinase (MAPK) signaling pathway and the PI3K-AKT-mTOR pathway. It is known that mutations in genes encoding components of these two pathways (BRAF and PIK3CA) are important drivers of carcinogenesis, and they are also targetable protein kinases. However, BRAF and PIK2CA mutations do not overlap with RAS mutations in many cases.

They are relatively independent downstream driving carcinogens. Targeting BRAF or PIK2CA by screening biomarkers also does not refer to the mutation status of RAS. Therefore, strictly speaking, targeting BRAF and PIK2CA is not the main method for targeting RAS mutations.

In addition, there are indirect targeted RAS synthetic lethal strategies, and interference with the metabolic process of cancer cells regulated by RAS, which are mostly limited to the proof-of-concept stage, which is far from a drug.