This signal pathway is not only expressed in tumor cells, but also plays an important role in the tumor microenvironment that produces immunosuppression.

Therefore, the upstream ligand GAS6 and the downstream receptor TAM (including AXL, MER, and TYRO3) that constitute this signaling pathway are both highly potential targets for the development of next-generation tumor drugs.

A series of new drugs are being developed for upstream and downstream targets in the GAS6/TAM signaling pathway, including small molecule inhibitors, monoclonal antibodies, ADCs, bait proteins and other types of drugs. Currently, all projects have entered the stage of clinical efficacy verification. , But no drugs have been approved for marketing.

One of the fastest-growing GAS6/TAM targeted drugs, AVB-500 is an Fc fusion decoy neutralizing protein with high affinity for GAS6, and is currently the only biological macromolecule that can simultaneously block the binding of GAS6 to three receptors The clinical safety of the drug has been verified and the efficacy has been initially observed. A key clinical trial of platinum-based resistance to ovarian cancer will soon be launched.

The composition of the GAS6/TAM signaling pathway

GAS6 (Growth arrest-specific protein 6) is a 75kDa soluble glycoprotein that was first discovered in mouse embryonic fibroblasts in 1988. Its downstream receptors are called TAM receptors and belong to the receptor tyrosine kinase family. 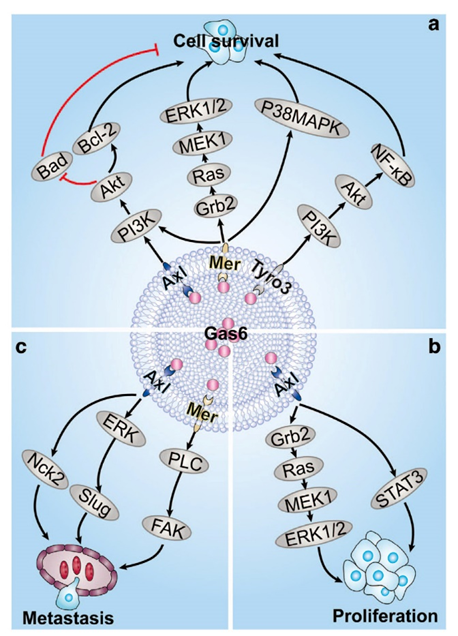 Overexpression and activation of GAS6/TAM in tumors

GAS6 is highly expressed in tumors such as melanoma, nerve sheath tumor, glioma, pancreatic ductal adenocarcinoma, ovarian cancer, and thyroid cancer, and promotes tumor growth and metastasis. The three TAM receptors downstream of GAS6 are overexpressed in a variety of tumors, such as

On tumor cells, GAS6 binds to TAM receptors to activate downstream signaling pathways such as Akt, Grb2, ERK and PI3K, thereby exerting its biological effects and promoting the survival, proliferation and migration of tumor cells.

The role of GAS6/TAM in tumor microenvironment

The tumor microenvironment consists of tumor cells and surrounding immune and inflammatory cells, fibroblasts, interstitial tissues, capillaries, and various cytokines and chemokines. It is a complex integrated system.

Abnormal physiological conditions and cytokines in the tumor microenvironment can also promote the expression of GAS6/TAM, and promote tumor aggressiveness and carcinogenicity.

For example, under hypoxia and metabolic stress in the tumor microenvironment, HIF-1α can activate Tyro3 transcription. TGF-β, GM-CSF, and α-interferon can all induce AXL expression.

The Mer promoter region contains steroid response elements, so its expression is activated in estrogen and androgen-positive tumors.

GAS6/TAM is continuously activated in the tumor microenvironment, leading to the generation of a series of immunosuppressive signals, such as inducing a decrease in the expression level of MHC-I on the surface of tumor cells, causing an increase in the expression of the immune checkpoint molecule PD-L1 in tumor cells, and induction It secretes some immunosuppressive cytokines and chemokines, such as TGF-β, TNFα, IL-3, CCL-3 and CXCL2, etc. Suppress the host’s anti-tumor immune response, thereby mediating tumor immune escape.

Therefore, the GAS6/TAM signaling pathway not only plays a key role in tumorigenesis, progression and metastasis, but also mediates tumor resistance and immune escape, making this pathway one of the most potential next-generation tumor therapy targets. . 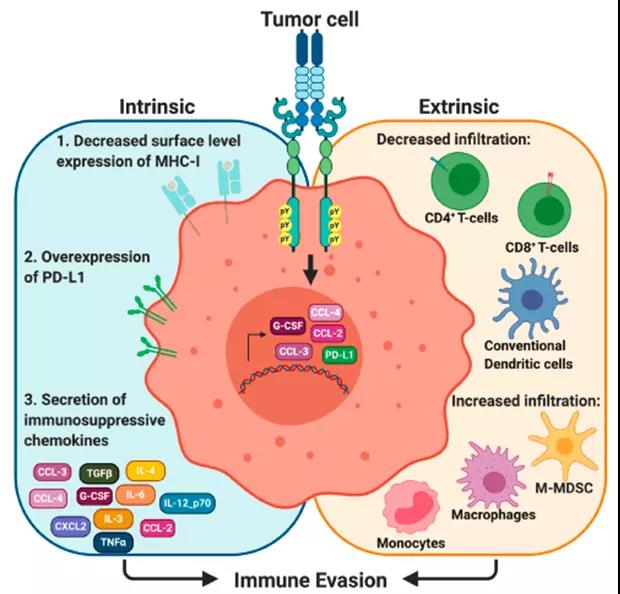 Due to the differences in the distribution and function of downstream TAM receptors, the advantage of targeting the ligand GAS6 located upstream of the signaling pathway is that it can simultaneously block the activation of the three receptor signaling pathways.

The currently developed drugs include some non-TKI small molecule compounds, GAS6 monoclonal antibodies that block the GAS6/TAM binding signal, and decoy receptors that are combined by appropriate protein engineering.

In the development of drugs for upstream signals of GAS6/TAM, the most advanced is the decoy receptor AVB-500 developed by Aravive.

AVB-500 is a fusion protein that fuses the extracellular domain of AXL, one of the GAS6 receptors, with the Fc domain of human immunoglobulin G1 fragment.

Its binding activity is much higher than the affinity of endogenous AXL and GAS6, so it can effectively bind to GAS6 and eliminate its ability to activate the TAM signaling pathway.

This is currently the only biomacromolecule drug that can simultaneously block the binding of GAS6 to three receptors.

At present, AVB-500 has carried out a number of clinical studies in various tumors such as ovarian cancer, kidney cancer and bladder cancer.

The results of the clinical Ia trial in healthy volunteers showed that AVB-500 can be tolerated with a single dose and 4 weeks of continuous administration, with no serious side effects and dose-related side effects. All tested doses have pharmacological activity and can inhibit serum GAS6 for at least 1 week.

In July 2020, Aravive announced the success of the clinical 1b trial evaluating AVB-500 in platinum-resistant ovarian cancer.

The trial examined the safety of AVB-500 in combination with paclitaxel (PAC) or liposomal adriamycin (PLD) in 53 patients.

The analysis showed that AVB-500 was well tolerated, and no dose-limiting toxicity or failure was found. Anticipate safety signals.

So far no serious toxicity related to AVB-500 has been found. The current early clinical data show that among platinum-resistant ovarian cancer patients, the disease control rate of AVB-500 is 41.7%, which is much better than the historical data of 10-15% of standard treatment alone.

Considering the good safety of AVB-500 and the high anti-tumor activity shown in early data, the FDA granted the drug fast track status in platinum-resistant recurrent epithelial ovarian cancer. At the same time, clinical trials of the drug in clear cell renal cell carcinoma are under evaluation.

The downstream TAM is the target, including small molecule inhibitors (TKI) for the intracellular tyrosine kinase region, monoclonal antibodies that inhibit the binding of extracellular domains and ligands and their derived antibody conjugate drugs (ADC), And AXL has also been developed as a new CAR-T therapeutic target and so on.

Although there are many projects on this track, due to the high homology of RTK, in order to avoid increasing off-target toxicity, small molecule TKIs are required to have good selectivity, which increases the difficulty of development; and to prevent the high affinity of GAS6 to the receptor , Also put forward high requirements for the binding activity of monoclonal antibodies.

At present, the fastest progressing of such drugs is the AXL small molecule inhibitor Bemcentinib, and the ADC drug EnaV (AXL-107-MMAE, enapotamab vedotin) developed based on AXL monoclonal antibody, both of which target AXL. The dual inhibitors of Axl and Mer have 4 drugs in the early clinical stage (phase II ONO-7475, phase I INCB-81776, SLC-391 and PF-07265807). For TYRO3, there are currently no drugs in clinical trials.

Bemcentinib (BGB324 or R428) is a highly specific AXL small molecule kinase inhibitor developed by BerGenBio, which can inhibit AXL phosphorylation at a lower concentration (IC50 14 nM). A number of oncology clinical I/II trials have been carried out around Bemcentinib, which are combined with chemotherapy, targeted therapy, or immune checkpoint inhibitors in different tumor types.

One of the most striking trials is a phase II clinical study in combination with Pembrolizumab in the second-line treatment of platinum-resistant patients with advanced lung adenocarcinoma.

Although in the overall evaluation of all patients, the objective response rate was 25%, and the disease control rate was 57%. Compared with Pembrolizumab alone, there is no significant effect.

However, after subdividing the composite AXL score (cAXL, which is a comprehensive cell surface AXL immunohistochemistry score developed by BerGenBio) positive patients, it was found that cAXL positive patients were relatively negative patients, which had significant clinical benefits in PFS (Progressive Free Survival) (medium). Bit PFS 8.4 months vs 2.9 months).

EnaV is an ADC drug jointly developed by Genmab and Seattle Genetics. The drug is a prodrug of AXL monoclonal antibody (AXL-107) coupled with the microtubule blocker MMAE. It has been completed in relapsed or refractory solid tumors. In the clinical phase I trial in patients, the tolerable dose range was determined, and a certain therapeutic effect was observed. 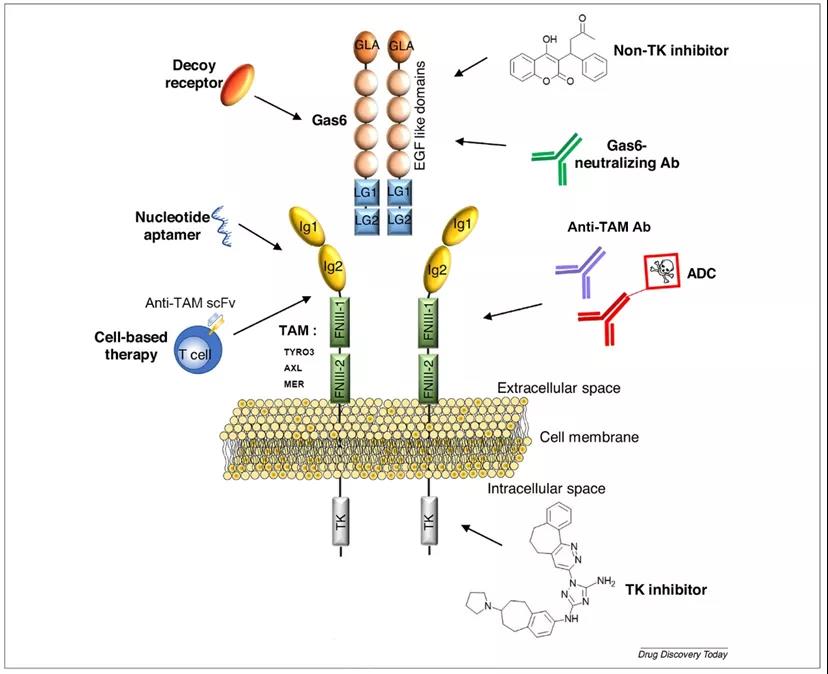 The combination of Tecentriq (anti-PD-L1 monoclonal antibody) + Avastin (anti-VEGFA monoclonal antibody) is approved for the first-line treatment of hepatocellular carcinoma, again verifying the golden combination of immune checkpoint inhibitors and tumor microenvironment modulators. However, the current combination therapy still has huge room for improvement. Considering the high complexity of the tumor microenvironment, finding a new immunotherapy combination is still the focus of the next stage of tumor therapy development.

GAS6/TAM mediates tumor immune escape in the tumor microenvironment, and provides a strong theoretical basis for the combination of GAS6/TAM inhibitors and immune checkpoint inhibitors. Preclinical studies have also shown that a variety of drugs targeting the GAS6/TAM signaling pathway have shown effectiveness in combination with PD-1/L1 drugs.

In the phase II clinical trial of the combination of AXL small molecule inhibitor Bemcentinib and immune checkpoint inhibitor Pembrolizumab, although the increase in total ORR was not significant compared with Pembrolizumab alone, it was considered that 90% of the patients in the study were PD- L1 is negative or weakly positive, which suggests the potential of GAS6/TAM pathway inhibitors in combination with PD-1/L1.

On this basis, AVB-500, which can simultaneously block the binding of GAS6 to the three receptors, has started the clinical 1/2 of the combination with Durvalumab (anti-PD-L1 monoclonal antibody) in platinum-resistant recurrent epithelial ovarian cancer. Periodic test. In addition, Aravive and Merck have also launched a phase 1/2 clinical trial of AVB-500 in combination with Avelumab (anti-PD-L1 monoclonal antibody) in advanced urothelial cancer.

It is worth mentioning that on November 11, 2020, the biopharmaceutical company Sidi Medicine, which focuses on the development and commercialization of new-generation tumor immunotherapy innovative drugs, announced that it has reached a cooperation agreement with the developer of AVB-500, Aravive, and Sidi Medicine will receive AVB-500 is the exclusive license for clinical development and commercialization of the oncology field in Greater China.

Combining the thoughts of Di Medicine’s years of deep cultivation in the field of PD-L1 drugs, the prospect of GAS6/TAM pathway inhibitors and immune checkpoint inhibitors combined is worth looking forward to.