The two hottest areas of tumor therapy are tumor targeted therapy and tumor immunotherapy. Tumor-targeted therapies target cell signaling pathways, cytokines, or cell cycles, which have been identified as cancer-causing sites that cause tumor cells to specifically die.

Tumor immunotherapy restores the body’s normal anti-tumor immune response by restarting and maintaining the tumor-immune cycle, thereby controlling and eliminating tumors. The latest immunotherapy targets are the “immune checkpoints” of immune cells, such as CTLA4, PD-1 and PD-L1.

Review the development history of immune checkpoint inhibitors. CTLA-4 was discovered and cloned in 1987. After more than 20 years of development, James Allison of the University of California at Berkeley discovered its mechanism of action in the mid-1990s, which promoted the inhibition of CTLA4 to regulate immunity and treat cancer. In 2011, the antibody Yervoy (ipilimumab) of BMS (Bristol-Myers Squibb) was successfully marketed. Although this drug is not selling well, it is the world’s first immune checkpoint inhibitor.

In 1992, Tasuku Honjo of Kyoto University in Japan discovered and cloned PD-1. After more than 20 years of development, BMS and MERK launched PD-1 inhibitors almost simultaneously in 2014. These three immune checkpoint inhibitors were all used to treat melanoma at the beginning.

This is a breakthrough for the CTLA-4 inhibitor-ipilimumab. Although its ORR (Objective Response Rate) is relatively low, OS (Overall Survival) can be very long for patients who are effective.

PD-L1 inhibitors currently have no products on the market in China, but there are several companies whose products are waiting to be approved. For example, Cornerstone’s PD-L1 inhibitors and Corning Jereh’s PD-L1 inhibitors will be launched soon. There may be three or four more listed next year, so this track is already very crowded. 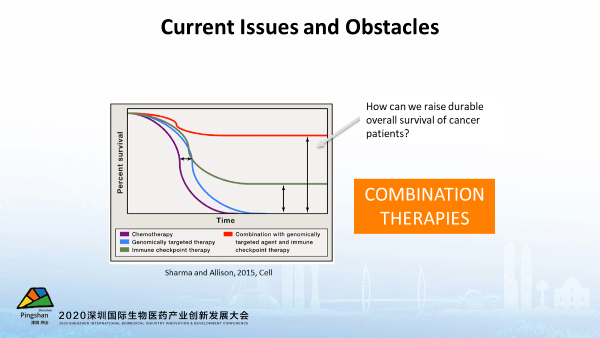 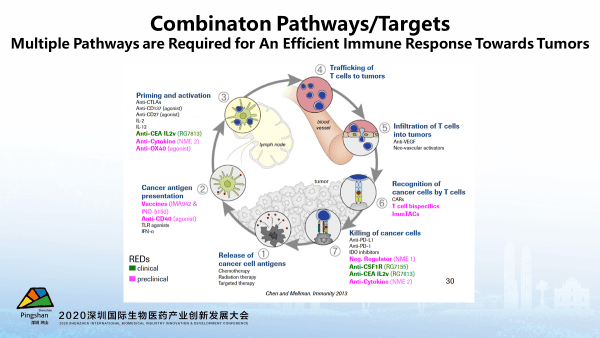 This picture summarizes the combination of multiple targets and multiple pathways for tumor immunotherapy. There are many different mechanisms and combined applications of different tumor environments in the multi-step and multi-step tumor immunity. 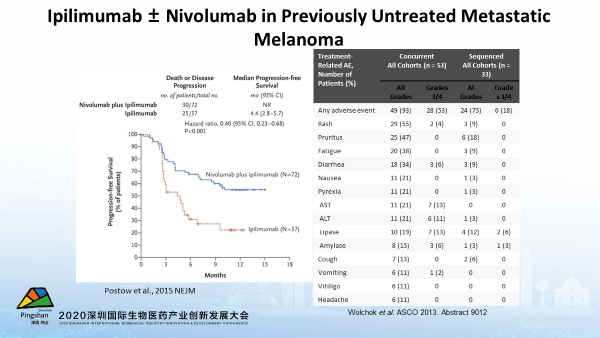 At present, in the field of tumor immunotherapy, there are some mechanisms of action or the combination of treatment methods, as shown in the figure below: 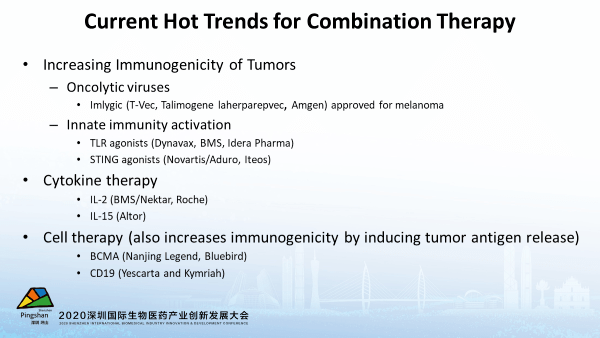 A huge breakthrough has been made in tumor immunotherapy. PD-1 and CTLA-4 immune checkpoint inhibitors have opened a new era of immunotherapy for tumor treatment, but they also face many challenges.

In this clinical trial, Drug K used PD-L1 as a biomarker for predicting efficacy to accurately select patients and achieved good efficacy. Prior to this, the sales of O drug had always been better than that of K drug. The clinical trial of this biomarker proved that K drug may be better than O drug for some indications. K drug successfully performed curve overtaking and surpassed O drug.

PD-L1 is currently the most widely used Biomaker in the field of tumor immunotherapy, but PD-L1 detection still has some potential problems that need further research and improvement, as shown in the figure below: 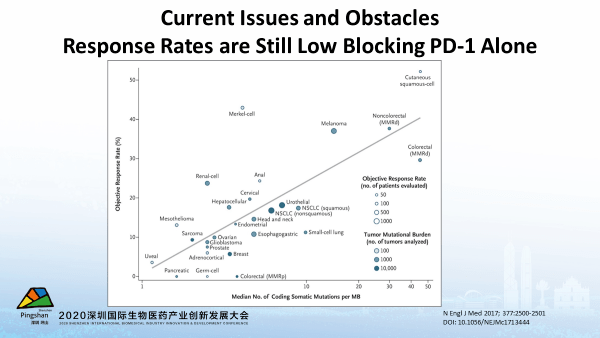 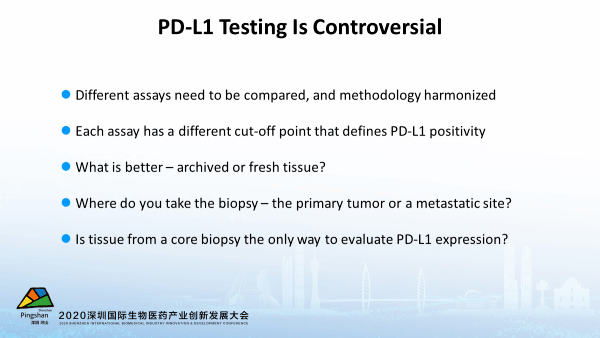 In May 2017, the U.S. FDA first approved the PD-1 antibody, and Pembrolizumab (Keytruda, K drug) was used to determine unresectable or unresectable or mismatch repair gene defects with high microsatellite instability (MSI-H) or mismatch repair gene defects (dMMR). Patients with metastatic solid tumors. This is the first time the FDA has approved a treatment plan that does not take the tumor site as a reference and only relies on biomarkers.

There are still many studies devoted to the discovery of biomarker. I believe that with the continuous in-depth research of precision medicine, more Biomaker will be used in tumor immunotherapy.

Tumor immunotherapy is advanced to 2.0, that is, a combination of different treatment methods. The efficacy of PD-1/PDL-1 alone is not high. How to combine treatments with different mechanisms of action?

There are several hot tumor immunotherapy combined application fields, the hottest is bispecific antibodies or multispecific antibodies. A better curative effect can be achieved through the synergistic effect or superimposed effect of combining different targets. There are also oncolytic viruses, vaccines, cell therapy, etc.

Amgen’s BiTEs immunotherapy is the first CD3 bispecific functional antibody successfully developed. Although its sales are not very good, it proves that the CD3 bispecific antibody can work.

Many companies in China are now making CD3-based T cell connectors. It should be noted that CD3 is very toxic, and you must be very careful when doing it.

There are many other T cell connectors that have been made now and have great potential. Some early results also seem to be very good, such as 4-1BB, OX40, CD40, etc.

The second-generation antibody tumor immune activator has dual functions, has better specificity for tumors, and solves the toxicity problem of activated antibodies. For example, PD-L1x4-1BB can enhance the activation of 4-1BB while inhibiting PD-L1. Because of the high specificity of tumor selection, the toxicity of 4-1BB is reduced.

The competitive landscape of PD-L1x4-1BB bispecific antibodies shows the popularity of this field. Among the six double antibodies in the clinical stage, Genmab’s GEN-1036 has been reported to have significant efficacy and controllable toxicity. The other 5 double antibodies are still in the early stage of clinical trials, and no relevant results have been reported. This field is developing very fast.

To give another example, a few weeks ago, the PD-1xCTLA-4 bispecific antibody of Zhongshan Kangfang reported a very good double antibody function. Judging from its clinical data, the toxicity is much lower than that of CTLA-4 single drug, and the efficacy is obviously better than the combination of two single drugs.

The Probody technology developed by Cytomx Company links 1 shielding peptide + 1 flexible linker + 1 protease substrate sequence at the end of the antibody drug light chain, and the antibody drug becomes Probody (precursor). Probody will be specifically activated by proteases in tumor tissues, thereby releasing the drug effect of antibodies, while Probody cannot be activated and inactive in healthy tissues, thereby reducing the toxicity of antibodies. This is also a development direction of current development.

The US FDA launched the first batch of oncolytic viruses to treat melanoma in 2015. Oncolytic viruses, as an effective means to treat cancer, were officially launched. At present, the oncolytic virus has developed to the third generation. It has the characteristics of high killing efficiency on tumor cells, good targeting, high safety, low side effects and low cost, making it the most promising and promising malignant tumor treatment in the future One of the means.

The development of cell therapy is very rapid. In the near future, there will be great breakthroughs in the field of cell therapy, we will wait and see