PD-1 treatment is still only 10-30% of patients showing long-term, long-lasting response, most of the population lacks response, and acquired drug resistance and immune-related adverse events (IRAE) are also huge obstacles.

One of the mechanisms to overcome the limitations of PD-1 treatment is to target other immune checkpoints related to the tumor microenvironment, such as LAG-3, TIGIT, TIM-3, VISTA, B7-H3, ICOS and BTLA, these new types of immune checks The point is a feasible and promising option for the treatment of solid tumors, and a number of clinical trials are currently under active research. 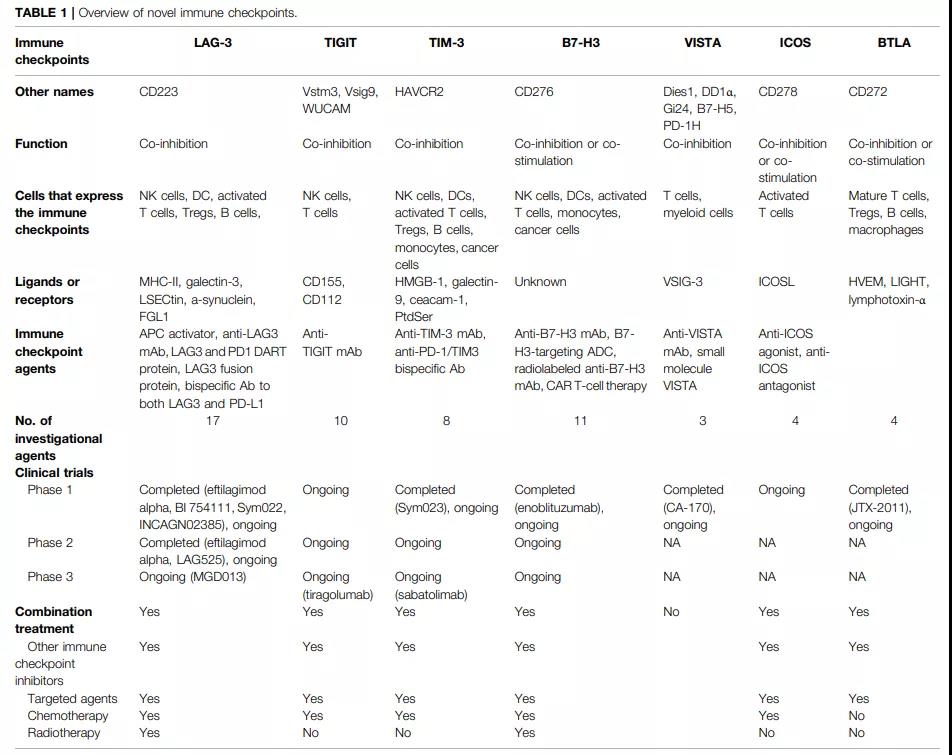 At present, many pharmaceutical companies have deployed these new checkpoints for targeted drug research and development. Among them, LAG-3, TIGIT, and TIM-3 are particularly competitive. 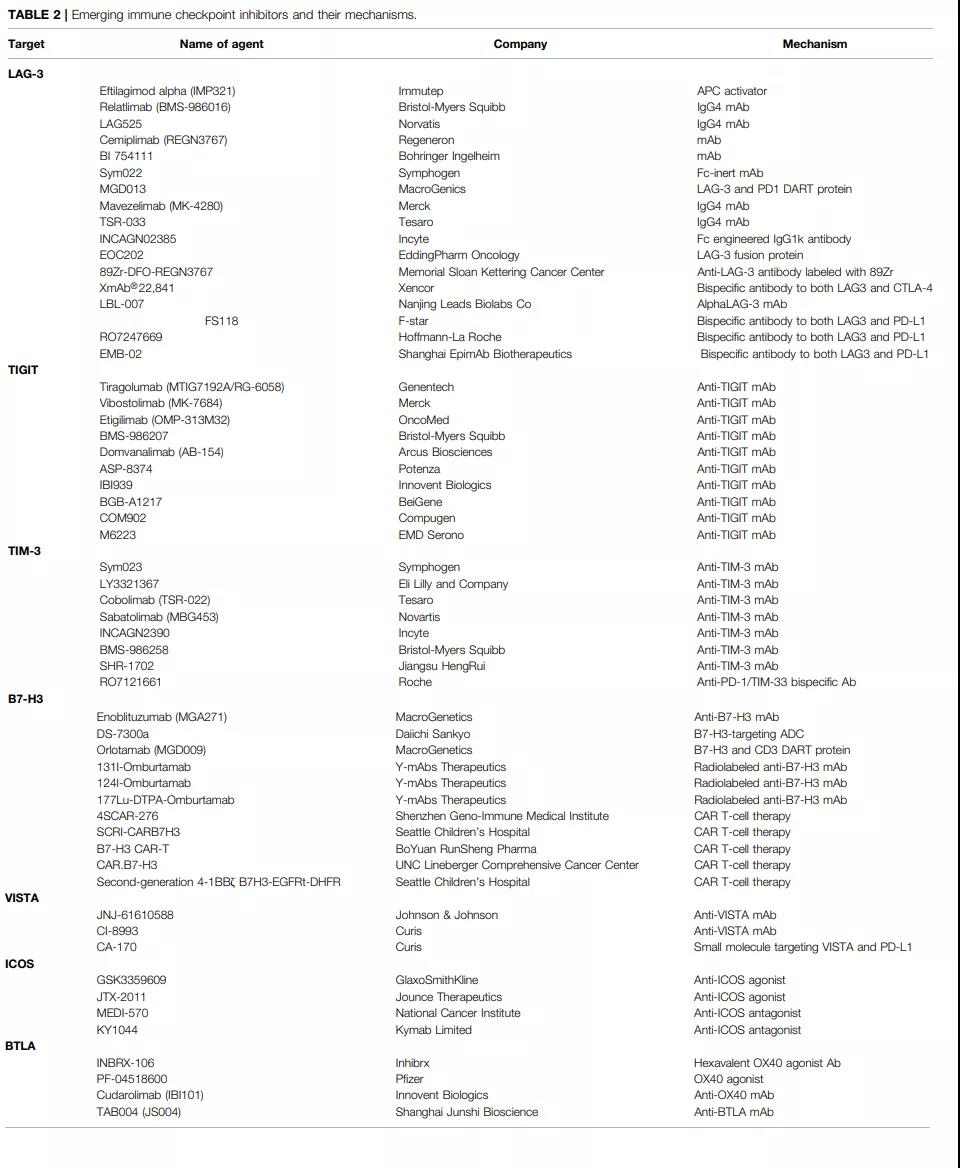 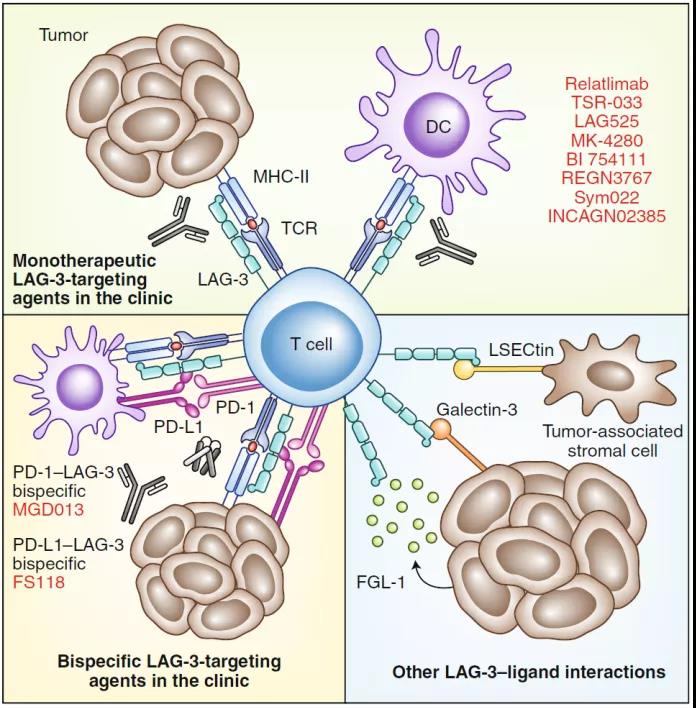 The co-expression of LAG-3 and PD-1, as well as reliable clinical data on the dual blockade of LAG-3 and PD-1, prompted people to focus on this combination and other immune checkpoint inhibitors. Currently, there are 17 drugs targeting LAG-3, involving multiple therapeutic combinations for multiple tumors. Eight drugs have intermediate or final clinical results, and nine investigational drugs are undergoing clinical trials. 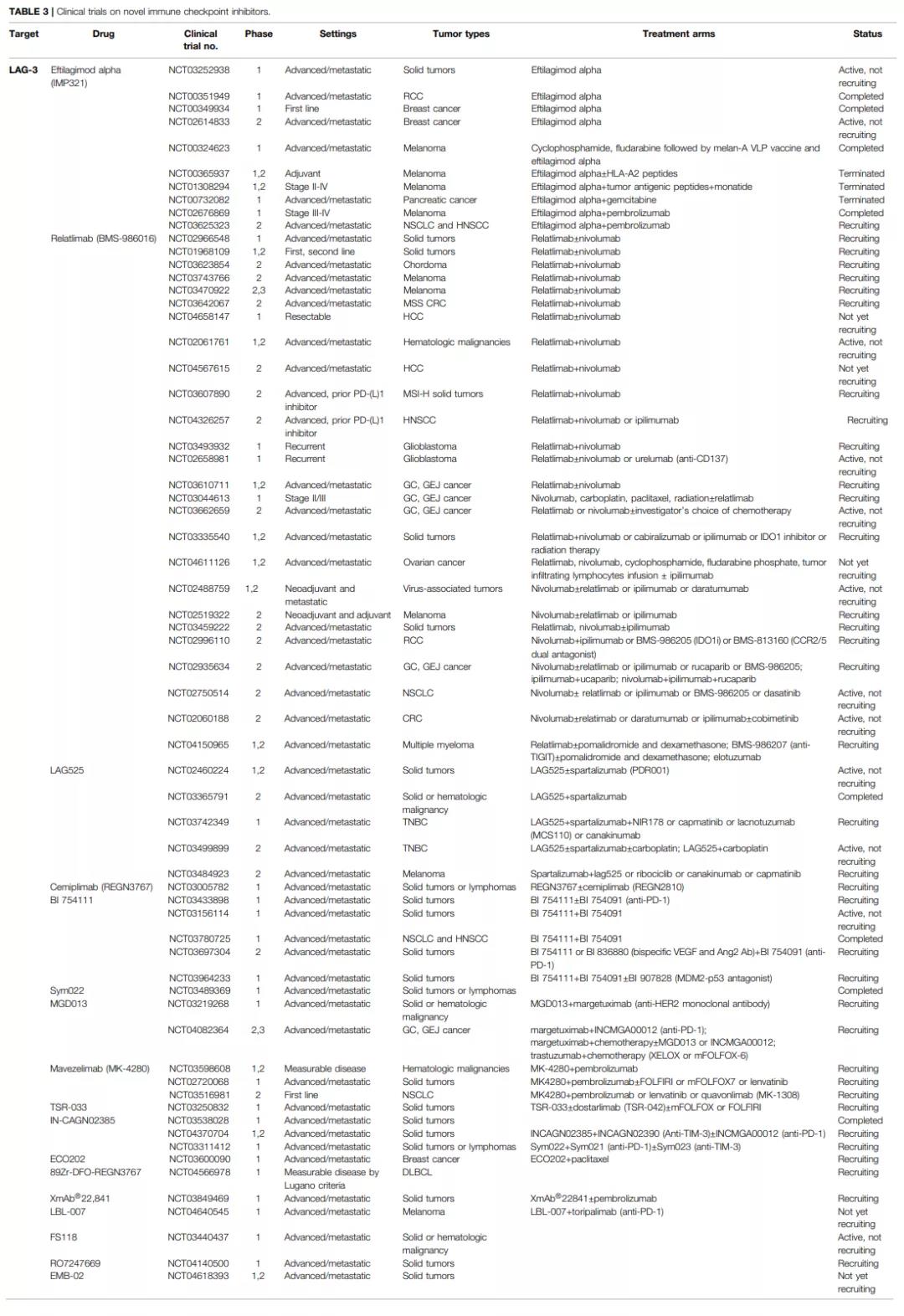 A phase 1 clinical study (NCT02676869) evaluated the safety and preliminary efficacy of eftilagimod alpha (IMP321) combined with pembrolizumab in 24 patients with metastatic melanoma. This study included a dose escalation test in group A and a dose expansion test in group B. Patients received subcutaneous injections of pembrolizumab and eftilagimod alpha, once every two weeks, at doses of 1, 6 or 30 mg, respectively. Groups A and B lasted 6 months and 12 months. The results show that there is no dose-limiting toxicity (DLT), the treatment is well tolerated, and the response to the treatment is encouraging. The total effective rate (ORR) of patients in the pembrolizumab refractory group A and PD-1 untreated group B were 33 respectively. % And 50%.

Similarly, IMP321 was studied in combination with pembrolizumab or chemotherapy in non-small cell lung cancer and head and neck squamous cell carcinoma (NCT03625323) and metastatic breast cancer (NCT02614833). Preliminary results indicate that the combination therapy can cause a long-lasting immune response.

Relatlimab (BMS-986016) is an IgG4 monoclonal antibody targeting LAG-3. It has been studied in various environments and drugs, especially with approved immune checkpoint inhibitors (such as nivolumab and nivolumab). ipilimumab) and other new drugs (such as indoleamine 2,3-dioxygenase-1 (IDO1) inhibitors, CCR2/5 dual antagonists and anti-TIGIT antibodies).

LAG-525 is another IgG4 monoclonal antibody targeting LAG-3. The efficacy of LAG-525 combined with spartalizumab in the treatment of advanced solid tumors and hematological malignancies was evaluated in an open-label Phase 2 clinical study (NCT03365791) . The test results showed good anti-tumor activity, especially in neuroendocrine tumors, small cell lung cancer (SCLC) and diffuse large B-cell lymphoma (DLBCL), the clinical benefit rate (CBR24) at 24 weeks was 0.86, 0.27 and 0.804, reaching the main endpoint of the test. In addition, clinical trials for other tumors such as triple negative breast cancer (TNBC) (NCT03742349 and NCT03499899) and melanoma (NCT03484923) are ongoing.

Cemiplimab (REGN3767) is a monoclonal antibody against LAG-3. The phase 1 clinical study (NCT03005782) evaluated cemiplimab as a monotherapy in patients with advanced malignant tumors (n=27) and compared with PD-1 monoclonal antibody (n= 42) Safety and tolerability of combined application. DLT was not observed in the single treatment group, while in the combination treatment group, in addition to grade 3 myasthenia gravis, there was also an increase in grade 4 creatine phosphokinase. In general, both treatments are considered tolerable.

Sym022 was evaluated as a single agent or as a combination therapy with sym021 (anti-PD-1) in phase 1 trials (NCT0331412, NCT03489369, and NCT03489343) in solid tumors or lymphomas. Interim analysis showed that out of 15 patients treated with monotherapy and 20 patients with combination therapy, there was 1 undiagnosed PR. Both groups showed good tolerability and safety, and 1 with combination therapy had grade 3-4 immunity. Related hypophysitis. Further research results are yet to be announced.

MGD013 is a bispecific antibody of LAG-3 and PD-1. Its safety, tolerability, DLT, MTD, PK/PD and anti-tumor activity were evaluated in a phase 1 clinical study (NCT03219268) . Fifty patients were included in the dose escalation phase, and 157 cases were included in the dose expansion phase. 46% and 32% of the patients had received immunotherapy before. The test results showed that there was no MTD, well tolerated, and the most common treatment-related adverse events (TRAE) were fatigue and nausea. Despite having received immunotherapy, there was an objective response in both groups of patients. Further research results are yet to be announced. 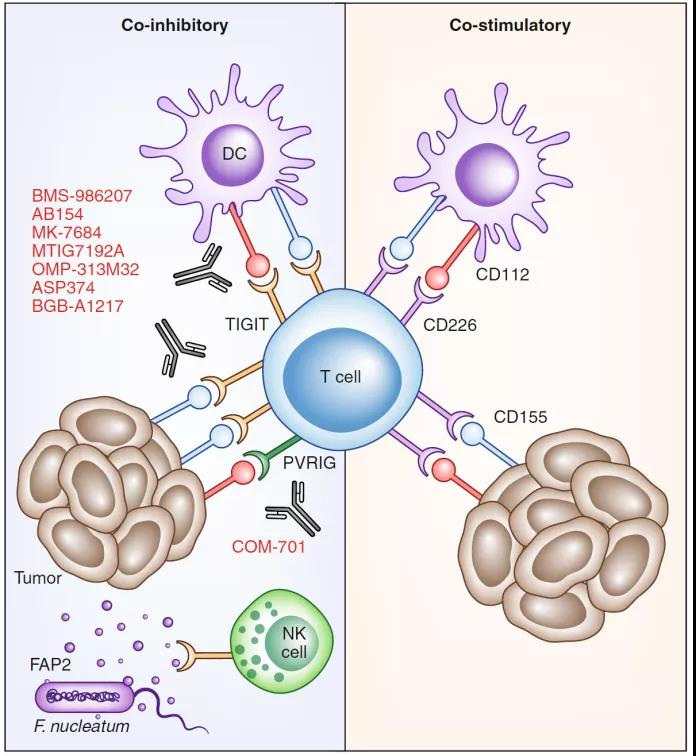 Among the 10 anti-TIGIT monoclonal antibodies that are undergoing clinical trials, one of the most promising drugs is tiragolumab. In a randomized, double-blind, phase 2 clinical trial (NCT03563716), in 135 patients with PD-L1 positive, locally advanced unresectable or metastatic NSCLC, the efficacy and safety of the combination therapy of tiragolumab and Tecentriq were evaluated Sex.

The positive results of this trial prompted the initiation of Phase III clinical trials (NCT04294810) in some patients with high PD-L1 expression. And tiragolumab+Tecentriq combined chemotherapy regimen for the treatment of SCLC without chemotherapy (NCT04256421). Under metastatic conditions, phase 1 and phase 2 clinical trials of tiragolumab for esophageal cancer and gastric cancer (NCT03281369) are also ongoing.

Vibostolimab (MK-7684) is also an anti-TIGIT monoclonal antibody. A phase 1 clinical study (NCT02964013) evaluated the safety of Vibostolimab combined with pembrolizumab in patients with advanced/metastatic solid tumors not treated with anti-PD-1/PD-1 And initial efficacy. The results showed that the overall tolerability was acceptable. The median ORR and PFS of all patients were 29% and 5.4 months, respectively. The median ORR and PFS of 13 patients with TPS ≥ 1% were 46% and 8.4 months, respectively. month. The clinical trials (NCT04305054, NCT04305041 and NCT04303169) of vibostolimab combined with other drugs for the treatment of melanoma are also underway. 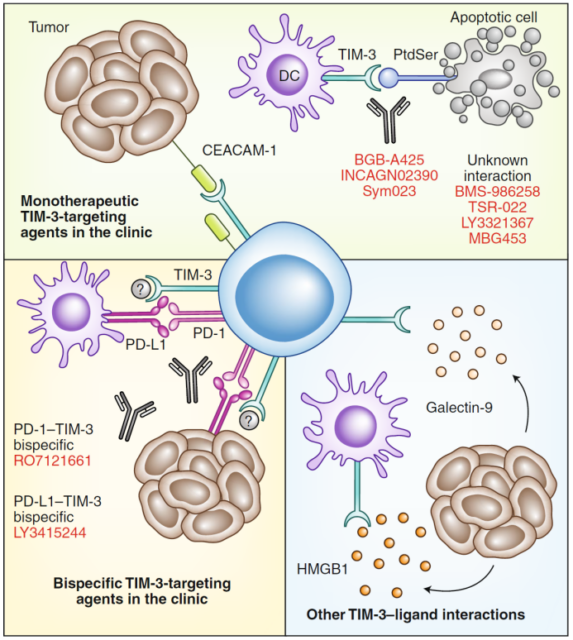 There are seven anti-TIM-3 monoclonal antibodies and one anti-PD-1 and TIM-3 bispecific antibody (RO7121661) in clinical trials.

LY3321367 is also an anti-TIM-3 monoclonal antibody. In the phase 1 clinical trial (NCT03099109) for refractory solid tumors, the tolerance and preliminary tolerability of LY3321367 monotherapy and combined LY3300054 (anti-PD-L1) treatment were evaluated Curative effect. The mid-term results showed that the single-agent and combination therapies were well tolerated, no DLT was observed, and most of the observed TRAEs were grade 2. In the single-agent group, 2 cases of tumor shrinkage> 20% were observed. But in the end, Eli Lily abandoned the project from the pipeline.

B7-H3, also known as CD276, is a member of the B7 family. B7-H3 is present in activated immune cells, such as antigen presenting cells (APC), NK cells, T cells and monocytes. In addition, B7-H3 is also expressed in a variety of tumors. The contradictory role of B7-H3 in immune activity has not been fully elucidated. 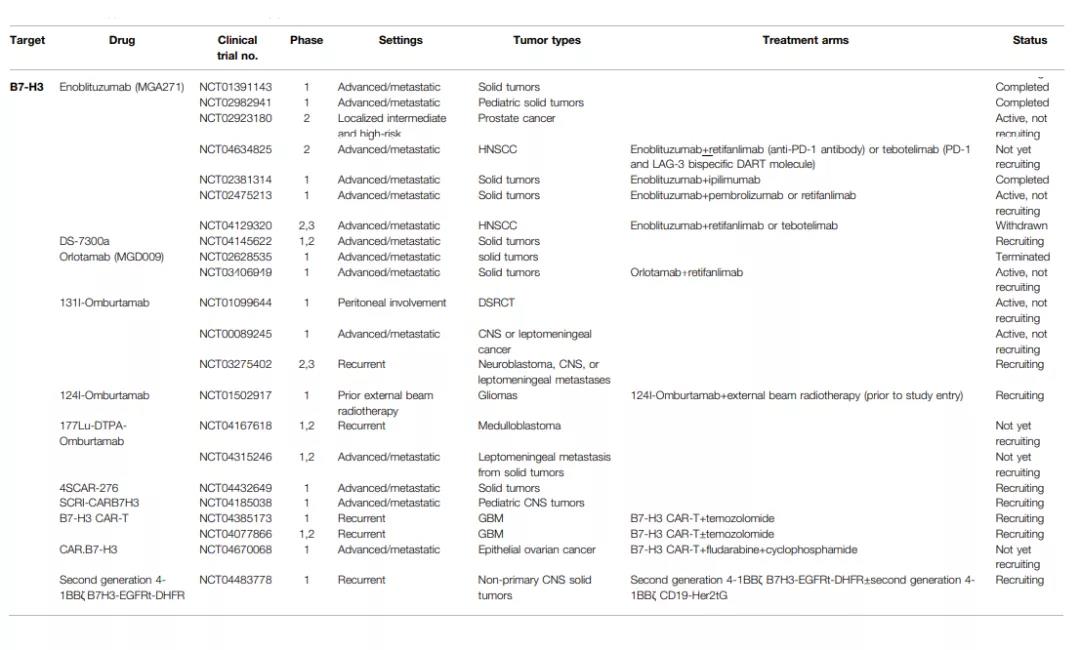 Enoblituzumab (MGA271) is an anti-B7-H3 monoclonal antibody with antibody-dependent cytotoxicity (ADCC) function. It has been studied in a variety of solid tumors including childhood tumors. The interim analysis of the Phase 1 clinical trial (NCT01391143) for refractory solid tumors showed that Enoblituzumab can tolerate up to 15mg/kg without DLT and MTD. Although 71% of patients experienced TRAEs, such as fatigue (30%) and infusion-related reactions (26%), with appropriate supportive treatment, most of these adverse events were tolerable. Currently, clinical trials of Enoblituzumab as a single-agent therapy or a combination therapy with anti-PD-1 antibodies (retifanlimab or pembrolizumab), anti-CTLA-4 antibodies (ipilimumab), and PD-1 and LAG-3 bispecific antibodies are underway.

DS-7300a is an antibody-conjugated drug (ADC) of an antibody targeting B7-H3 and DXd. DXd is an itrakan derivative that can inhibit topoisomerase I. Phase 1/II clinical study (NCT04145622) is underway.

Orlotamab (MGD009) is a bispecific antibody with the DART structure of B7-H3 and CD3. Its monotherapy (NCT02628535) and clinical trials of combined retifanlimab therapy (NCT03406949) for refractory solid tumors are underway.

VISTA is an immunomodulatory receptor expressed on most cell subsets of the hematopoietic lineage. The expression of myeloid cells was the highest, and the expression levels of microglia and neutrophils increased significantly. Followed by other myeloid subpopulations, including monocytes, macrophages, basophils and dendritic cells. VISTA is an important checkpoint of primitive T cells. It hinders the early stages of T cell activation and the transition from resting to starting.

JNJ-610588 (NCT02671955) and CI-8993 (NCT04475523) are anti-VISTA monoclonal antibodies and are currently undergoing phase 1 clinical trials for the treatment of refractory solid tumors. CA-170 is a small molecule antagonist against VISTA and PD-L1. A phase 1 study of patients with advanced solid tumors or lymphomas (NCT02812875) showed that in 19 patients treated at 6 dose levels (50-800mg), there was no DLT during the dose escalation. Exploratory analysis showed that after oral administration of CA-170, the proportion of circulating CD8+ and CD4+ cells increased. Further data on dose escalation, recommended phase 2 doses, and anti-tumor response are yet to be announced.

ICOS, also known as CD278, is a member of the CD28 co-receptor family. ICOS ligand (ICOSL) is expressed in APC cells such as macrophages, DC and B cells. Unlike the expression of CD28 in primitive and memory T cells, most ICOS are only expressed after activation of memory T cells, and only a small amount in resting memory T cells. ICOS interacts with its ligand ICOSL to enhance the anti-tumor effect by regulating memory and effector T cell development and humoral immune response.

Currently, both anti-ICOS agonists and anti-ICOS antagonists are under clinical research.

In head and neck cancer, the efficacy of GSK3359609 and pembrolizumab with or without platinum-based chemotherapy is currently under investigation (NCT04128696).

Another research anti-ICOS agonist monoclonal antibody is JTX-2011, which is used in combination with anti-PD1 (pembrolizumab or nivolumab) or anti-CTLA-4 (ipilimumab) for advanced solid tumors (NCT02904226). In the I/II phase of the trial, JTX-2011 monotherapy and combined use with nivolumab, anti-tumor activity was observed within the range of controllable toxicity.

The combination of BTLA and HVEM weakens the effect of immune stimulation. This effect also inhibits T cell proliferation and B cell activation, reduces the number of CD8+DC cells, and reduces TNF-α, IFN-γ, IL-2 and IL- 4 secretion of cytokines

Tumor immunotherapy is one of the main pillars in the field of oncology today, especially the treatment of unresectable, metastatic and recurring cancers. The success of ICIs, such as anti-CTLA-4 and anti-PD-1/PD-L1, combined with chemotherapy, immunotherapy and targeted drugs, has changed the mode of cancer treatment. Nevertheless, the limited efficacy of ICIs and IRAE paved the way for the discovery of new checkpoints.

Among the new immune checkpoint inhibitors, anti-LAG-3 and anti-TIGIT are the most promising targets, and their combined use with anti-PD-1/PD-L1 may help overcome the limitations of previous treatments. At the same time, follow-up clinical studies on TIM-3, B7-H3, VISTA, ICOS and BTLA will also provide much more expected data.