Research Progress and Challenges of the Mechanism of Acquired Resistance of Immune Checkpoint Inhibitors.

The emergence of immune checkpoint inhibitors (ICIs) has rapidly changed the treatment model of many cancers. In the past ten years, from the first approval of CTLA-4 inhibitors in metastatic melanoma in 2011, to the current PD- (L)1 inhibitors have become a routine treatment for more than 20 different cancer indications.

This significant shift is largely driven by the unprecedented persistence of relief that ICI brings, and even without continued treatment, the response may continue for several years.

However, except in certain diseases (such as melanoma, Merkel cell, Hodgkin’s lymphoma, MSI-H tumor) patients have a higher response rate to single-agent PD-1 blockade (40%−70 %), the remission rate for most other cancer indications is only 10-25%. In addition, even in patients who initially respond to ICIs, the disease may eventually progress.

In addition, extensive research has also been conducted on predictive biomarkers of initial ICI response. PD-L1 expression, tumor mutation burden, tumor infiltrating lymphocyte (TIL) or related gene expression characteristics have been explored as potential predictors, and various other markers are currently being studied.

More generally, there appears to be an inverse relationship between the overall response rate of PD-1 inhibitors and the frequency of acquired resistance of responders in different tumor types. 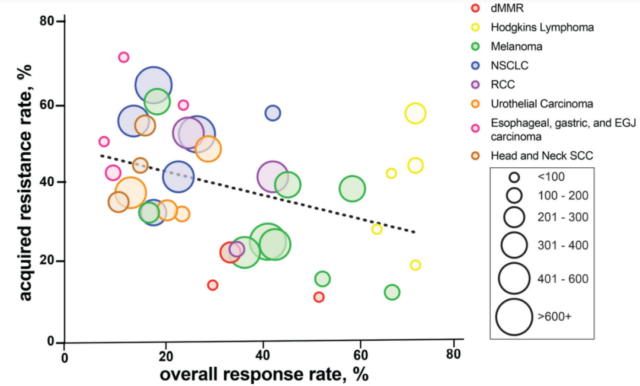 Although many cases have uncertain or unknown mechanisms, the resistance mechanisms of ICI can be roughly divided into the following categories: 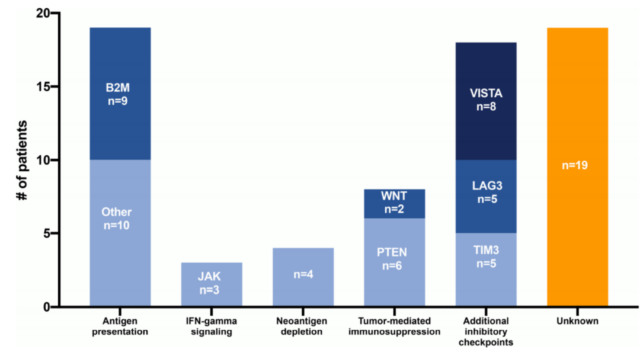 The activation of T cell-mediated immunity depends on the recognition of antigens on the major histocompatibility complex (MHC) of antigen-presenting cells, and β-2-microglobulin (B2M) is responsible for stabilizing the MHC class 1 molecules on the cell surface and The key gene that promotes the loading of antigen peptides.

B2M loss-of-function mutations can lead to the loss of MHC I, causing tumors to evade immune system surveillance. In addition, there are many other unknown genes or cytokines that may regulate MHC 1 expression, thereby affecting resistance to ICI. 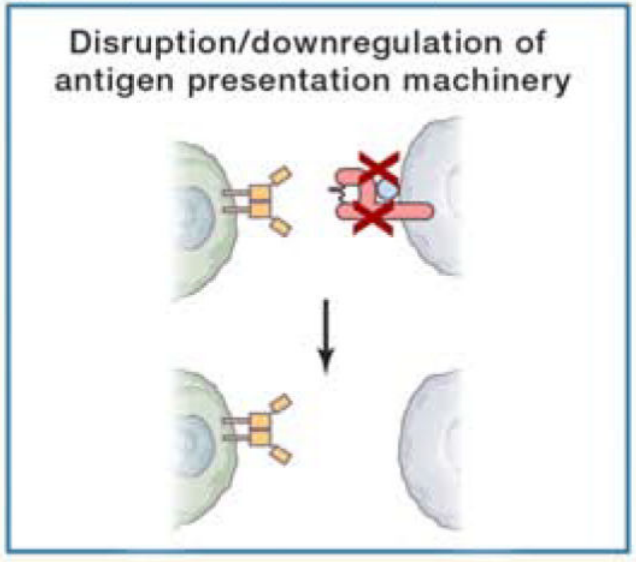 Effector T cells secrete IFN-γ through the JAK-STAT pathway to trigger the signal cascade of tumor cells, mediate the expression of MHC I and PD-L1, and induce tumor cell death through a variety of ways. In this pathway, the key first step is to activate receptor-related kinases JAK1 and JAK2 through the binding of IFN-γ and heterodimeric IFNGR1/IFNGR2. Recent clinical studies have reported cases of JAK1 or JAK2 inactivating mutations, which may promote the progression of ICI resistance. 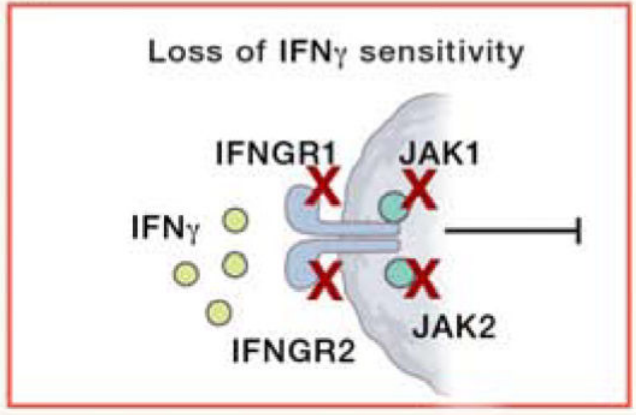 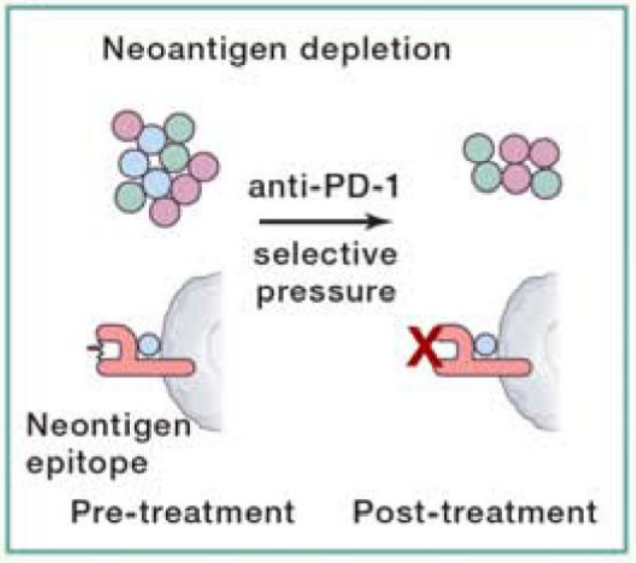 Similar to loss of PTEN, WNT-β-catenin activity is related to immunosuppressive cytokine production, changes in dendritic cell activation, promotion of regulatory T cells, and lack of T cell infiltration in melanoma, supporting β-catenin in ICI The role of resistance. 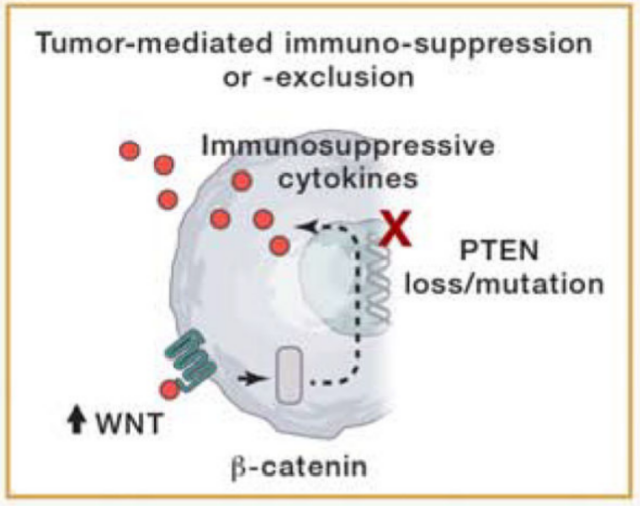 Some reports describe the up-regulation of other T cell checkpoints during acquired resistance, including TIM3, LAG3, and VISTA. Although these checkpoints may be functionally related to T cell failure and end-stage dysfunction in some cases, they may also be related to T cell activation. Therefore, additional data may be needed to understand the functional T cell status in these examples and ultimately their contribution to acquired resistance. 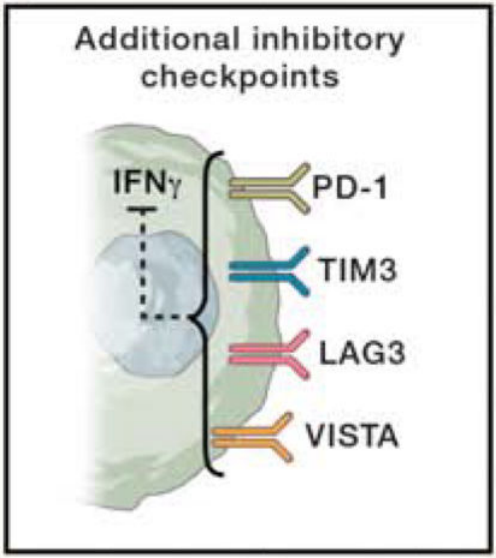 Challenges of Research on Mechanisms of ICI Acquired Resistance

There are many challenges in studying the mechanism of acquired drug resistance in immunotherapy. The main challenges include:

1. Lack of uniform standards for the definition, classification and application of acquired resistance;

In order to analyze and interpret the results of multiple studies, a clear and consistent framework for defining acquired resistance should be established. For example, in EGFR-mutant lung cancer, relatively simple but specific guidelines have been developed to define patients with acquired resistance.

The prescribed EGFR criteria should have 1) recording the initial objective response to treatment or significant and long-lasting (greater than 6 months) clinical benefit; and 2) systemic progression of the disease during the last 30 days of the EGFR-TKI continuous treatment period.

These criteria may seem simple and self-evident, but they do help to maintain consistency in the evaluation of new treatment methods in terms of resistance and mechanisms. There is no such unified definition of acquired resistance in immunotherapy.

2. Difficult to obtain the best tumor sample for analysis;

Compared with molecular targeted therapy, the response to ICI is lower, and the occurrence of acquired resistance to ICI is more special. For example, in EGFR-mutant lung cancer, about 80% of patients will initially respond after receiving osimertinib treatment, and almost all responders will eventually develop acquired drug resistance. In this case, routine collection of pre-treatment tissue is reasonable and effective.

However, for ICIs, the proportion of patients who are initially sensitive to treatment is much smaller, and among those who do respond, the development of acquired resistance is variable. Therefore, in studies of particular interest in acquired resistance, it is very inefficient to collect tissues from all patients at baseline. In general, the more unpredictability of acquired resistance to ICIs makes it difficult to design and execute successful related studies.

In targeted therapy analysis, a large number of next-generation DNA and RNA sequencing have successfully identified the main drivers of acquired resistance.

However, also focusing on the large amount of DNA and RNA sequencing of tumor samples, research on ICIs resistance has found only a limited number of acquired genetic changes.

On the contrary, the resistance to ICI may be more subtle, dynamic and complex, involving at least three interactions (host, tumor, tumor microenvironment) and two parts (intratumor and systemic), so it requires resistance to tumors and immune cells.

Acquired resistance of ICI is a common clinical phenotype, and the study of its mechanism is subject to many obstacles, and there are relatively few studies.

Only through an in-depth understanding of basic biology and allowing the precise deployment of immunotherapeutic methods other than immune checkpoint inhibitors can we obtain more effective treatment strategies.

This requires our concerted efforts to overcome numerous obstacles in order to deepen our understanding of the intrinsic biology of acquired resistance to ICI.

This progress will eventually lead to the development of more reasonable drugs and cell therapy in the future to prevent, circumvent or reverse resistance to ICI.