Hepatitis B Bcl-xL protein is a promising target molecule?

Recently, Polish scientists proposed a promising target molecule for hepatitis B antiviral therapy: Bcl-xL. Bcl-xL represents a protein family and is mainly responsible for regulating the endogenous apoptosis pathway. Due to its anti-apoptotic activity, Bcl-xL can jointly determine the viability of various virus-infected cells.

The researchers described the effects of the above-mentioned viral infections on the intracellular levels of Bcl-xL, and discussed the effects of Bcl-xL-dependent cell survival control on the pathogenic events accompanying the infection (such as tissue damage or tumorigenesis). And also proposed an antiviral treatment strategy based on pharmacological regulation of Bcl-xL expression or activity. Bcl-extra-large, a member of the Bcl-2 protein family, is a group of regulatory molecules involved in the regulation of apoptosis pathways. The Bcl-2 family includes pro-apoptotic factors and anti-apoptotic factors.

The first group is represented by three BH domains (i.e. Bax and Bak) and bh3 only proteins (i.e. Bim, Bad, Bid, Bik, Bmf and Hrk). The anti-apoptotic Bcl-2 family members consist of a protein with four BH domains, including Bcl-2, Bcl-w, A1, Mcl-1 and Bcl-xL. The activity of Bcl-xL has been widely studied for its effect on apoptotic cells in the field of tumor drug development. Cell viability can be a powerful factor in determining various diseases. Researchers have found that the up-regulation of Bcl-xL intracellular levels is related to tumorigenesis, such as prostate cancer, lymphoma, advanced malignant melanoma, neuroblastoma, breast cancer and so on.

The researchers also observed that Bcl-xL seems to also play an important role in viral infections. The genome of the hepatitis B virus, in the form of partial double-stranded DNA, undergoes reverse transcription during infection. The genetic material of HBV is wrapped in an icosahedral capsid, surrounded by a lipoprotein envelope. Due to the insufficient proofreading activity of HBV reverse transcriptase, which leads to a high mutation rate of its genome, HBV genomes have been found in 10 different geographical locations.

Studies have shown that HBV-host interactions include contact between HBx and anti-apoptotic Bcl-2 family members. HBx targets Bcl-xL and Bcl-2 through its bh3-like motif. The researchers determined that the interaction between HBx and the Bcl-2 protein family has a significant impact on the pathogenesis of hepatitis B virus. During the experiment, the mutation of the bh3-like motif deprived HBx of its ability to bind Bcl-xL and Bcl-2, and eliminated the HBx-dependent increase in cytoplasmic calcium levels in infected liver cells.

Mutational inactivation of HBx can prevent cell death and significantly reduce virus replication. This process requires high levels of cytosolic Ca2+. The researchers used short hairpin RNA (shRNA) to silence Bcl-xL expression. This result indicates the importance of anti-apoptotic proteins in the replication of hepatitis B virus. Knockdown of the Bcl-xL gene can reduce the cytoplasmic calcium level in infected HepG2 cells, thereby reducing HBV replication. To put it simply, Xiaofan Health summarized the conclusions reached by this researcher, namely: 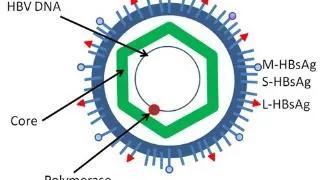 The results of this study suggest that Bcl-xL combined with HBx can promote virus reproduction and death of infected cells. In further exploration of the crystal structure of the HBx bh-3-like motif that binds to the Bcl-xL protein, a shorter α-helix and its ability to enter the Bcl-xL hydrophobic capsule were discovered. Due to the discovery of its significance in the HBV-host cell interaction, Bcl-xL is considered to be an antiviral therapy. Another factor in the further testing of Bcl-xL is the correlation between Bcl-xL and liver cancer.

Up-regulating the expression of Bcl-xL can lead to a decrease in the apoptotic potential of liver cancer cells, which will help its survival, growth and colony formation. In the study of HBV-positive hepatocellular carcinoma patients, it was found that HBV can cause the increase of Bcl-xL in an il-34 dependent manner. In summary, a number of scientists from Warsaw, Poland recently presented new insights in the International Journal of Molecular Sciences: Bcl-xL plays an important role in various viral infections, including hepatitis B virus.

The anti-apoptotic activity of Bcl-xL can also promote viral infection. Including by prolonging the survival time of infected cells, it may be beneficial to the replication of IAV and MRBV; its overexpression is also the common reason for the continuous infection of HIV virus in immune cells, and immune cells act as a “refuge” for the virus. The resistance of bcl-xl-dependent cells to promoting apoptosis stimuli will also help HBV-, HCV-, EBV- and HTLV-1 related tumors.