Alzheimer’s disease (AD) is a common neurodegenerative disease. The accumulation of pathological tau protein in synapses has been identified as an early event of AD, and is closely related to the cognitive decline of AD patients. Synaptic dysfunction and loss of synaptic spine are also associated with cognitive decline in AD.

Under normal physiological conditions, tau protein is mainly concentrated in the cytoplasm and axons of neurons, and does not exist in a large amount in synapses. However, under disease conditions, due to the sorting error within neurons, the cross-neuronal For abnormalities in the transfer or clearance pathway, tau will accumulate in the postsynaptic compartment and presynaptic terminal.

Studies on mouse models of tau pathology have shown that hyperphosphorylation of tau can lead to mislocalization of tau on dendrites and dendritic spines.

The degradation of tau and other polyubiquitinated substrates is accomplished by the 26S proteasome, which is a protease that can degrade proteins into small peptides; the decrease in proteasome activity and its effects have also been observed in AD patients. Changes in conformation. These data suggest that damage to proteasome activity may be a common mechanism in various neurodegenerative diseases.

In previous studies, related studies in the Natura Myeku laboratory at Columbia University Irvine Medical Center showed that the pure 26S proteasome in the brain of tau transgenic mice (rTg4510) has defects in degrading ubiquitinated proteins, while phosphodiester Enzyme inhibitors can enhance the activity of the proteasome by cyclically activated protein kinase (cAMP)/cAMP-dependent protein kinase A (PKA), the cAMP/PKA signaling pathway, to hydrolyze tau, thereby alleviating the pathology of tau protein and improving cognitive function .

However, activating or enhancing intracellular protein degradation through the proteasome or autophagy pathway may not be an ideal strategy for the treatment of AD. Therefore, in the early stages of AD, targeting tau at specific locations in neurons may be a safer treatment strategy to prevent tau accumulation, spread, and cognitive decline.

The study found that PACAP1 receptors can reduce the amount of tau protein in the synapses of Alzheimer’s disease model mice, alleviate tau protein pathology, and improve the cognitive ability of mice.

In this article, first of all, the author found that as the disease progresses in tau transgenic mice (rTg4510) (Pre-, mid- and post-synaptic), the amount of pathological tau protein increases in neuron cell bodies, synapses, pre-synapses and postsynapses, especially in the cell bodies; and compared to pre-synaptic, post-synaptic A large number of different types of tau proteins have been accumulated, such as tau monomers, high molecular weight tau (65 kDa), and mutant tau (AT8) (Figure 1 AC).

Similar results were also found in the cortex of the brain group of AD patients; at the same time, an increase in the level of K48-linked ubiquitin chains in similar mice was also observed in the patients’ postsynaptic, which suggested the most common proteasome degradation targeting signal ( Figure 1 DK). 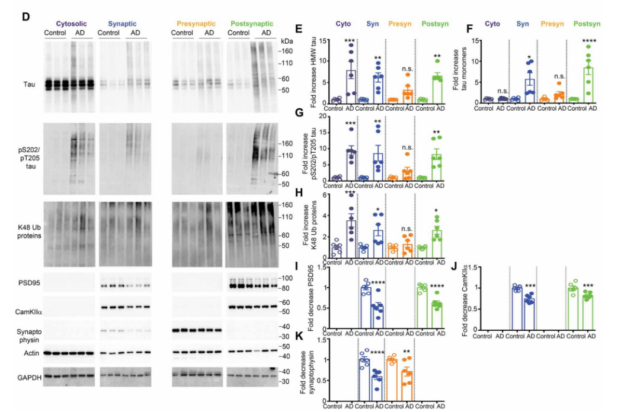 Tau protein pathology has a basic feature, that is, tau protein with seed function will preferentially be transported through synapses and pass through adjacent brain regions.

The same experiment was performed on the presynaptic and postsynaptic tau proteins isolated from the brain tissue of AD patients, and similar results were also observed. These results indicate that the tau in the postsynaptic compartment has more seed activity and more spreading potential.

Pituitary adenylate cyclase activating polypeptide (PACAP) type I receptor, referred to as PAC1R, is a Gs-G protein-coupled receptor mainly located on the postsynaptic membrane of neurons. It can activate the proteasome activity and tau protein degradation mediated by cAMP/PKA signaling pathway.

In the brain, after the ligand PACAP is released from the axon terminal, it acts by binding and activating the receptor PAC1R on the postsynaptic membrane. Here, the authors infected tau granules in primary neurons of tau mutant (P301S) mice, and observed that neuronal dendrites exhibited tau seed activity and insoluble tau accumulation, and PAC1R treatment can reduce dendrites The tau seed activity and insoluble tau can also significantly reduce the total post-synaptic tau protein content (Figure 2).

Previous results indicate that enhancing the activity of PKA proteasome can promote the clearance of tau protein. The phosphorylated tau at serine 214 (pS204 tau) is a marker of activating cAMP/PKA signal transduction (in short, if the level of pS204 tau is high, the signaling pathway is activated). 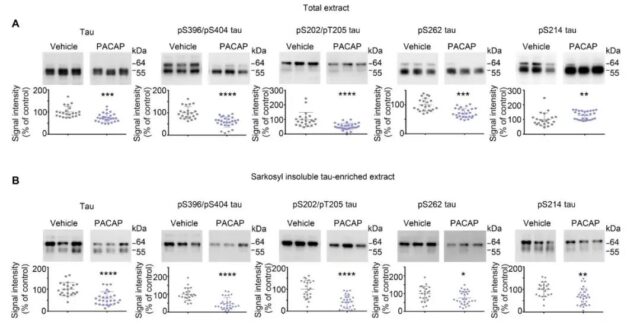 At the same time, the results also show that PACA treatment can significantly enhance the 26S proteasome activity and substrate degradation rate of the mouse synapse, and the phosphorylation level of the serine and threonine sites of the synaptic 26S proteasome also increases, and This phosphorylation is specific to PKA signaling (Figure 3).

These results suggest that PACA treatment can increase the activity of the postsynaptic proteasome by activating the PKA signaling pathway, and promote the hydrolysis of tau, thereby exerting a neuroprotective effect.

Indeed, further results show that PACA treatment can alleviate the tau protein lesions in the cortex and hippocampus of mice, which is reflected in the reduction of total tau protein, tau phosphorylated at multiple sites, and insoluble tau.

Finally, Morris water maze test and new object recognition test showed that PACAP treatment can significantly improve the spatial (learning) memory and declarative (situational) memory of the hippocampus of mice with early tau protein disease (rTg4510). These behavioral tests show that after receiving PACAP treatment, the tau protein pathology and memory ability of the mice have been improved. 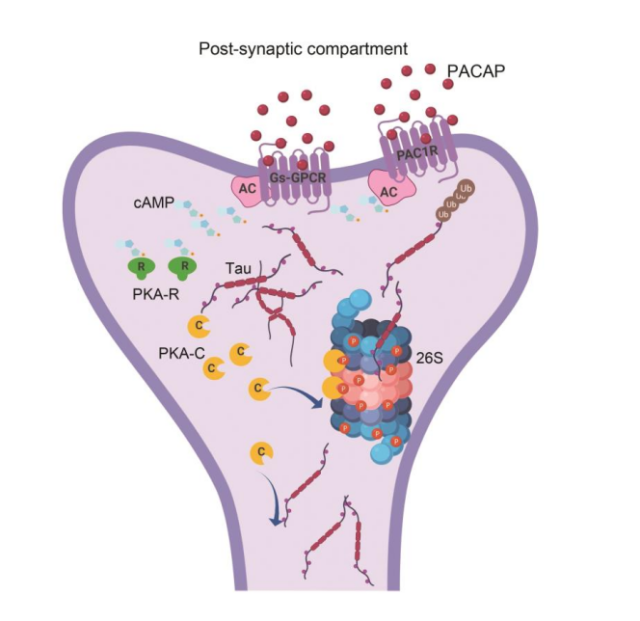 Figure 4 Work summary diagram: The mechanism of tau protein clearance in the postsynaptic compartment of neurons

The researchers used PACAP to target PAC1R to eliminate tau protein in the postsynaptic compartment of the mouse brain by increasing PKA signaling and enhancing proteasome activity (Figure 4). In PACAP-treated mice, the increase in proteasome activity in the postsynaptic compartment was associated with a pathological decrease in tau protein and an increase in cognitive ability (Figure 4).

In addition, this study also suggests that PKA phosphorylation of the proteasome is a better way to target the 26S proteasome enzyme activity. However, as an effector molecule of cAMP, PKA has a wide range of substrate proteins, which may be a long-term treatment for AD and other protein toxicity. Diseases that need attention.

Of course, there are still some unsolved problems in this study. For example, although PACAP treatment improves the cognitive ability of mice, PACAP has neurogenic, anti-apoptotic and neuroprotective properties, but its metabolic instability limits For its clinical application, it is necessary to develop PACAP derivatives or chemically modified small molecules to increase the stability of the enzyme while maintaining the selectivity and potency of PAC1R.

In conclusion, the research suggests that the method of targeted activation of PAC1R may be a potential strategy to prevent the accumulation of toxic tau protein and treat Alzheimer’s disease and other tau protein pathologies.