Alzheimer’s disease (AD) is the most common neurodegenerative disease. β-amyloid(Aβ) senile plaques and neurofibrillary tangles formed by tau protein are two well-known pathological features of AD. There are still no drugs that can effectively treat AD.

The autophagy-lysosome pathway is a cellular process that degrades misfolded, aggregated proteins and damaged organelles through lysosomes. This process is precisely regulated by a variety of signaling pathways and factors. Among them, the transcription factor EB (TFEB ) Is a major regulator and positively regulates the autophagy-lysosome pathway. In the course of many neurodegenerative diseases such as AD, the autophagy-lysosomal pathway and the function of TFEB are impaired, which suggests that targeting TFEB may be a potential strategy for the prevention and treatment of AD.

The paper revealed that electro-acupuncture (electro-acupuncture) can reduce Aβ pathology in Alzheimer’s disease models and improve cognitive function by activating TFEB. The first author of the article is Zheng Xiaoyan.

First, the author performed TNEA surgery and sham surgery on 5.5-month-old 5x FAD mice, and then applied Morris water maze and fear conditioning behavioral tests to evaluate the spatial learning and memory ability of the mice and the situational fear memory ability. (Figure 1-2). The results show. Compared with the sham operation group, the spatial learning memory and situational fear memory of the mice in the TNEA experimental group have been significantly improved, and this improvement in memory function is consistent with the amyloid precursor protein in the prefrontal cortex and hippocampus of the mice caused by TNEA ( APP) pathology is related to the decrease of Aβ pathology.

In other words, TNEA can promote the degradation of APP and Aβ, thereby enhancing memory. Neuroinflammation is also a common pathological feature of AD. Here, the authors found that TNEA inhibits the activation of microglia in the brains of AD mice, which prevents the occurrence of neuroinflammation. 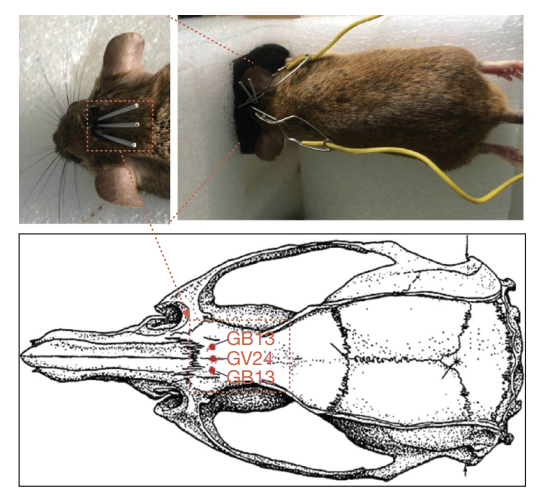 Sustained induction of autophagy will cause damage to the autophagy tide, and there are also defects in lysosomal clearance in AD patients and mice. It has been reported that APP and Aβ can be degraded through the autophagy-lysosome pathway mediated by TFEB. Autophagy lysosomes, also called lysosomes, are formed from the fusion of primary lysosomes and autophagosomes.

The authors found that in AD mice, autophagosomes cannot be converted into autophagolysosomes normally, and TNEA treatment can restore their normal conversion; although TNEA treatment does not affect the induction (or induction) of autophagy, it can be obviously Activate TFEB and promote the production of lysosomes, reduce defective lysosomes associated with Aβ plaques, thereby degrading APP and Aβ.

At the end of the article, experiments show that under the treatment of mouse TNEA, some kinases upstream of the TFEB pathway
(Such as MTORC1, MAPK1, AKT, etc.) activity or its phosphorylation level is significantly reduced, that is, TNEA may inhibit the kinase upstream of TFEB. In other words, TNEA may activate the phosphorylation and nuclear transport of TFEB by regulating the activity of some kinases upstream of TFEB, improve the autophagy-lysosome pathway, degrade APP and Aβ, etc., play a neuroprotective effect, and increase cognitive function. . 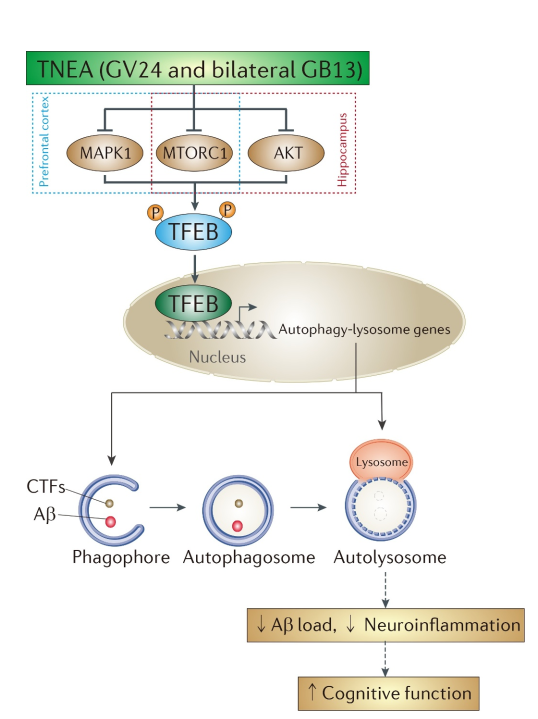 This study proved the cognitive enhancement effect of “Yizhi three-needle electro-acupuncture”, or “Yizhi three-needle electro-acupuncture”, namely TNEA, in an AD animal model. TNEA induces the degradation of full-length and C-terminal APP and Aβ, and inhibits the activation of glial cells in the prefrontal cortex and hippocampus, and prevents the occurrence of neuroinflammation; in terms of mechanism, TNEA activates downstream TFEB by inhibiting the AKT-MAPK1-MTORC1 pathway, thereby improving The autophagy-lysosomal pathway in the brain degrades APP and Aβ, alleviates neurotoxicity, and ultimately exerts neuroprotective effects and increases cognitive function.

Of course, the study has some unanswered questions.

(1) Although studies have shown the possible mechanism of TNEA-induced TFEB activation, more evidence is needed to verify this possibility, such as overexpression (or increase) in specific brain regions
The activity of these kinases;

(2) TFE3 is another transcription factor with similar functions to TFEB [14], then can TNEA also activate TFE3? In other words, does TNEA specifically activate TFEB?

(3) Will electroacupuncture at other different acupoints specifically act on TFEB or TFE3, or act synergistically on both, so as to play a neuroprotective effect in neurodegenerative diseases such as AD?

In general, the study shows that “Three Needle Electroacupuncture” (TNEA) is a promising treatment or adjunctive treatment of Alzheimer’s disease.