Cognitive decline in aging related to a type of immune cell

A key factor affecting brain aging and cognitive decline is macrophages-a type of immune cell related to inflammation. After using drugs to help macrophages replenish energy, the scientists succeeded in improving the cognitive functions such as memory in old mice. 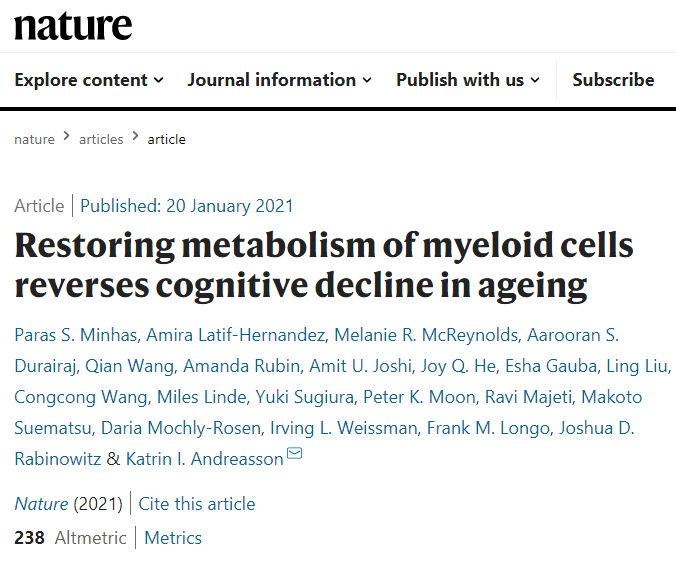 Introduction: Recently, the journal Nature published a research paper from Stanford University School of Medicine. Scientists pointed out that a key factor affecting brain aging and cognitive decline is macrophages, a type of immune cell related to inflammation.

Biologists have long believed that reducing inflammation can delay the aging process and delay the onset of age-related diseases, such as heart disease, Alzheimer’s disease, cancer, physical weakness, and even intellectual loss.

However, at present, there is no clear answer to the question of what causes specific cells of the immune system to enter the inflammatory overdrive.

Recently, the journal Nature published an online research paper from Stanford University School of Medicine, entitled “Restoring metabolism of myeloid cells reverses cognitive decline in ageing”. Scientists pointed out that a key factor affecting brain aging and cognitive decline is Macrophages-a type of immune cell involved in inflammation. After using drugs to help macrophages replenish energy, the scientists succeeded in improving the cognitive functions such as memory in old mice.

Myeloid cells are the main source of human PGE2. PGE2 (pro-inflammatory hormone prostaglandin E2) is a hormone belonging to the prostaglandin family. PGE2 does many different things in the body, some are beneficial and some are harmful, such as inflammation. The role of PGE2 depends on which cells the hormone attaches to and the types of receptors on these cells.

One type of receptor for PGE2 is EP2. This receptor exists on immune cells, and is especially abundant on myeloid cells. When combined with PGE2, it initiates inflammatory activities inside the cell.

Andreasson’s team selected macrophages, which are a type of myeloid cells distributed in human tissues, from people over 65 years of age, and combined them with macrophages of people under 35 years of age. For comparison. They also studied macrophages in young and old mice. They observed that the macrophages of older mice and humans over 65 not only synthesize more PGE2 than younger mice, but also have more EP2 on their surface. Andreasson and her colleagues also confirmed that PGE2 levels in the blood and brain of old mice also increased significantly.

“This is a double whammy and a positive feedback.” Andreasen said.

The researcher found that as PGE2 binds to the receptor EP2, the energy metabolism of these macrophages has changed: oxidative phosphorylation and glycolysis are inhibited, and glucose cannot be used effectively to produce sufficient energy. In a state of insufficient energy for a long time, macrophages can neither perform their due beneficial functions (such as monitoring pathogen invasion, cleaning dead cell debris, etc.), but will also fall into an inflammation state.

Scientists at Stanford University proved this by blocking the hormone receptor response on the surface of mouse bone marrow cells. They provided mice with one of two experimental compounds that interfere with the binding of PGE2-EP2 in animals. They also incubated cultured mouse and human macrophages with these substances. Doing so makes the old myeloid cells metabolize glucose like young myeloid cells, thus reversing the inflammatory properties of the old cells.

Even more surprising is that these compounds can reverse the age-related cognitive decline in mice. The older mice that received them also performed the same in recall and spatial navigation tests as young adult mice.

One of the two compounds used by scientists at Stanford University is effective even if it does not penetrate the blood-brain barrier. Andreasson said this shows that even resetting the myeloid cells outside the brain can have a profound effect on the inside of the brain.

She pointed out that neither of these two compounds have been approved for use in humans, and although they have not been observed in mice, they may be potentially toxic.

But they provide new ideas for drug manufacturers to develop drugs that can alleviate brain aging.