Nature: Let the brain return to youth! Restarting macrophage metabolism can alleviate cognitive decline in elderly individuals. Longevity is the pursuit of most people. Regrettably, the decay of the body limits the eternal life of the soul.

For natural life, aging seems to be inevitable. This is a systematic process of wear and tear. Until the system can no longer be repaired and tends to collapse, life will usher in the final outcome-“death.”

Not only that, at present, as the average life expectancy of human beings continues to increase, the proportion of Alzheimer’s disease, commonly known as Alzheimer’s disease, is also increasing in the population. Therefore, how to alleviate age-related cognitive decline is a very important research.

Since the beginning of the 21st century, with the development of life sciences, mankind’s cognition of aging has become more and more profound, and more and more research evidences show that aging can be reversed, as is cognitive ability.

On January 21, 2021, researchers from the Department of Neurology and Neuroscience of Stanford University School of Medicine published in Nature the title: Restoring metabolism of myeloid cells reverses cognitive decline in ageing (restoring the metabolism of myeloid cells can reverse the aging process Decline in cognitive ability) research papers.

This study showed that macrophages shut down major metabolic pathways during the aging process, and a drug that can reduce inflammation and enhance macrophage metabolism can reverse the cognitive decline in mice. At the same time, the study also proposed some key changes that lead to age-related cognitive decline, and pointed out that this symptom may not be permanent.

Aging is characterized by the continuous development of pro-inflammatory reactions, which will lead to atherosclerosis, metabolic syndrome, neurodegeneration, cognitive decline, and so on. As we age, cognitive decline and the incidence of Alzheimer’s disease will increase, and the aging brain is more susceptible to certain signaling molecules.

From a systemic point of view, the pro-inflammatory factors in the circulatory system can promote the decline of cognitive ability. In the brain, microglia will appear to lose the ability to clear misfolded proteins associated with neurodegeneration. However, prior to this, the underlying mechanisms for initiating and maintaining poor aging signals have not been well defined.

In this study, the research team led by Professor Katrin Andreasson found that in the aging mouse model, the lipid messenger-prostaglandin E2 (PGE2)-a major inflammatory regulator, its signal transmission will increase The metabolism of myeloid cells is inhibited.

Further studies have shown that in aging macrophages and microglia, prostaglandin E2 (PGE2) sends a signal to the body through its EP2 receptor to promote the conversion of glucose into glycogen, and reduce the flow of glucose and mitochondrial respiration— -This will lead to insufficient energy supply, which in turn drives an unsuitable pro-inflammatory response.

More importantly, because aging macrophages rely more on glucose as the main fuel source, the pro-inflammatory response of elderly individuals is more intense.

At the same time, the researchers inhibited the EP2 signaling pathway of macrophages in old mice and successfully restored the metabolism of these cells, thereby alleviating the inflammatory state of the whole body and brain of the old mice. Moreover, the hippocampal synaptic plasticity and spatial memory of these elderly mice have been improved!

These phenomena indicate that blocking the EP2 signaling pathway of peripheral macrophages is sufficient to restore the cognitive ability of elderly mice and achieve the reversal of aging!

Therefore, inhibition of EP2-dependent macrophage metabolism changes will represent a new approach to the treatment of aging disorders, which is better than using non-steroidal anti-inflammatory drugs that target COX-2 and COX-1 and inhibit beneficial and toxic prostaglandin signaling pathways Has stronger specificity. 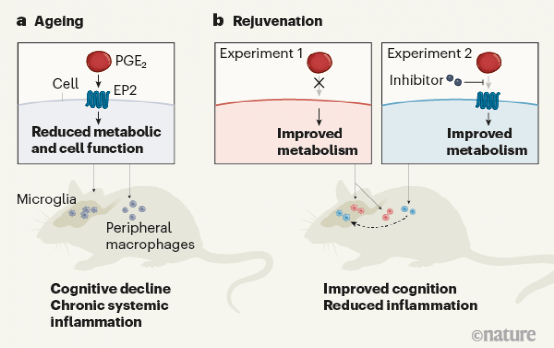 All in all, this study shows that cognitive decline is not an irreversible state. At least now, there are signs that we can reverse aging by restarting the glucose metabolism of macrophages, reducing inflammation and restoring young immune functions, thereby Improve the cognitive ability of elderly individuals!