Restoring myeloid cell metabolism can reverse cognitive decline in the elderly.   A major feature of aging is the persistent pro-inflammatory response.

A major feature of aging is the persistent pro-inflammatory response, which can lead to symptoms such as atherosclerosis, metabolic syndrome, cancer, and weakness. With age, cognitive decline and the high incidence of Alzheimer’s disease suggest that the aging brain is more susceptible to inflammation. From the perspective of the body as a whole, pro-inflammatory factors in the systemic circulatory system induce cognitive decline; in the brain, microglia lose the ability to clear misfolded proteins associated with neurodegenerative diseases. However, the underlying mechanism of how to trigger and maintain maladaptive inflammation during aging is still unclear.

The level of cellular energy metabolism plays an important role in regulating the activation state and function of the immune system. In order to maintain their own homeostasis, immune cells need sufficient glycolysis and mitochondrial metabolism to meet the needs of energy and biosynthetic precursors. Recent studies have shown that glycolysis and mitochondrial oxidative phosphorylation in senescent macrophages are significantly reduced, leading to immune dysfunction.

In this study, it was found that the increased signaling of the inflammatory mediator prostaglandin E2 (PGE2) and its receptor EP2 inhibited the energy metabolism of myeloid cells in aged mice, driving the maladaptive pro-inflammatory response. Inhibition of PGE2-EP2 signaling pathway in senescent myeloid cells significantly improves cell energy metabolism, body inflammation and brain cognitive function.

Lipid messenger-PGE2 is a downstream product of the cyclooxygenase 2 (COX-2) pathway and a major inflammatory mediator. PGE2 is found to increase in aging and neurodegenerative diseases. The researchers found that compared with the younger population (under 35), the PGE2 synthesis in monocyte-derived macrophages (MDMs) of people over 65 was significantly up-regulated (Figure 1a).

PGE2 dose-dependent stimulation can reduce glycolysis (extra-cellular acidification rate, ECAR) of human MDMs and inhibit mitochondrial oxygen consumption rate (OCR) (Figure 1b, c). When the EP2 receptor blocker PF-04418948 22 and compound 52 (C52) were used, the OCR and ECAR of macrophages increased, and the effect was opposite to that of the PGE2 and EP2 receptor agonist butaprost (Figure 1d) ). These data indicate that inhibiting PGE2–EP2 signaling may enhance the energy production of senescent myeloid cells.

By specifically knocking out the EP2 receptor of myeloid cells in old mice (Cd11bCre; EP2lox/lox mice), it was found that the OCR and ECAR of mouse peritoneal macrophages increased (Figure 1e), and the mitochondrial morphology, number and density increased (Figure 1e). 1h), the phagocytic ability of macrophages returned to the level of young mice (Figure 1i). In summary, blocking the EP2 signal of myeloid cells can prevent cell energy metabolism and immune function from aging. 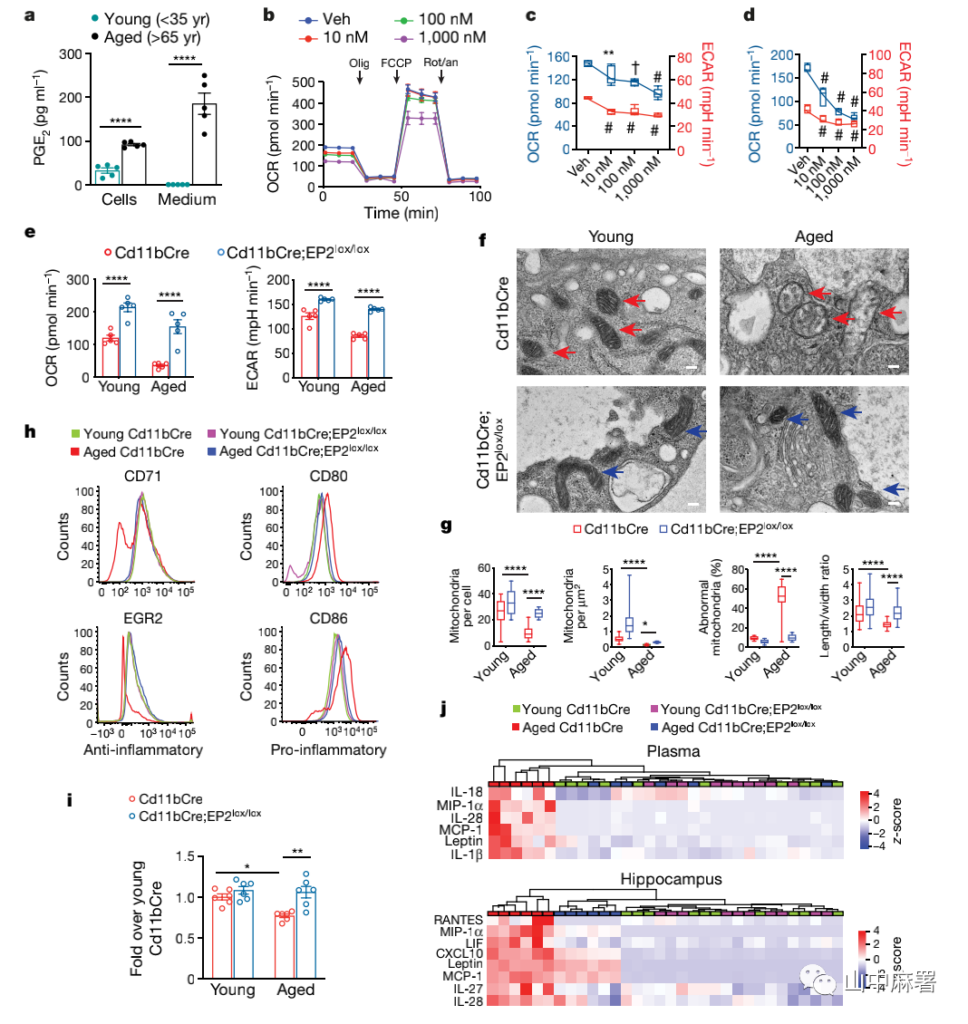 In view of the relationship between inflammation and cognitive impairment, the researchers inferred that the recovery of myeloid cell function caused by the down-regulation of myeloid cell EP2 signal may improve the cognitive function of elderly mice.

Therefore, an object location memory experiment and a Barnes maze test were performed, and it was found that the performance of the old mice that knocked out the EP2 receptor was no different from that of the young mice (Figure 2a-d), and they should have low presynaptic expression in the hippocampus of the aged brain And postsynaptic protein levels increased in the hippocampus of EP2 knockout mice, and the electrophysiological results also suggested increased synaptic plasticity (Figure 2e).

Therefore, the EP2 signal of myeloid cells in old mice was down-regulated, which restored hippocampal synaptic plasticity and memory function to a young level. 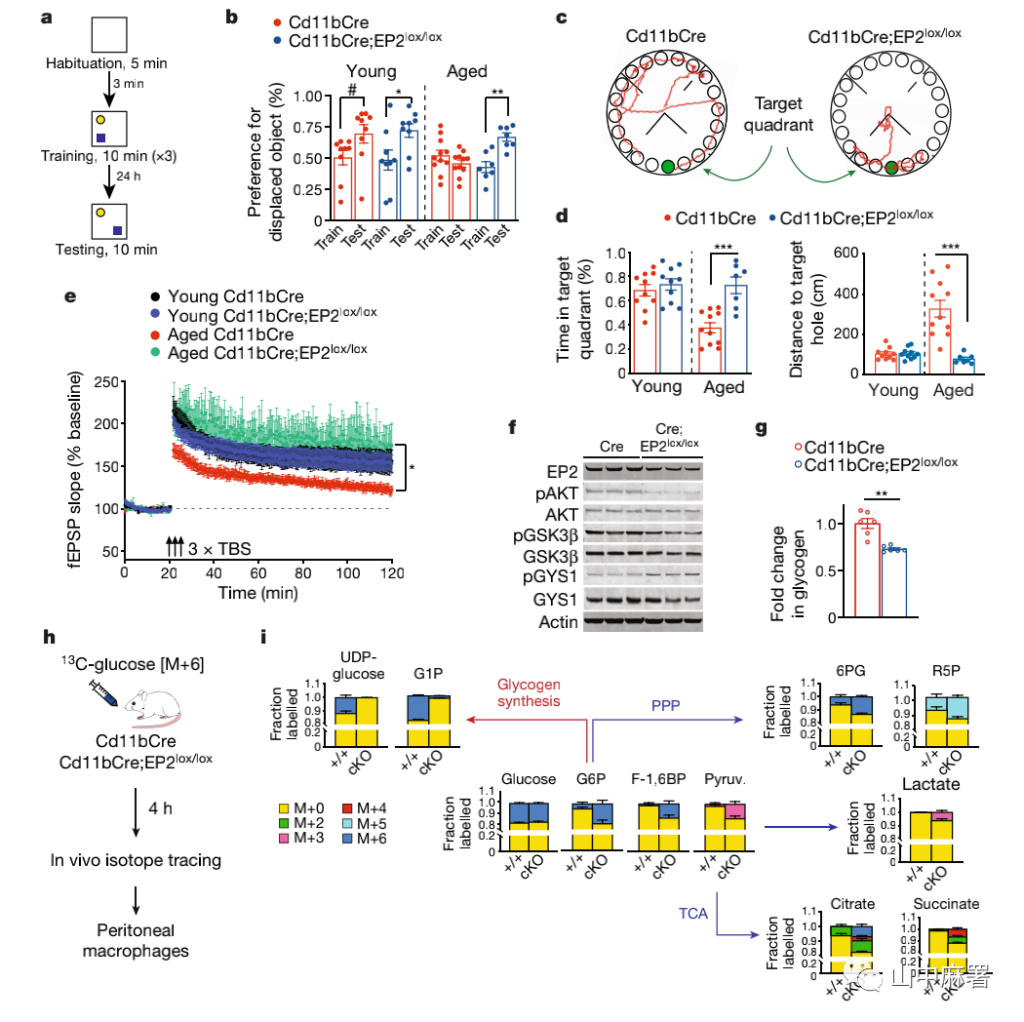 Next, the researchers tested whether the loss of GYS1 in elderly macrophages can restore young mitochondrial function and polarization. They found that knocking out GYS1 in human MDMs from elderly individuals (over 65 years old) can change the mitochondrial function and polarization of MDMs. The polarization state returned to a young level (Figure 3a-c). When butaprost was used to enhance EP2 signal, it did not change the bioenergy or immunophenotype of elderly MDMs after knocking out GYS1 (Figure 3d, e), confirming that GYS1 is EP2-mediated on myeloid cell metabolism and A key factor affecting immune function.

In addition, when the EP2 receptor in elderly MDMs was inhibited by drugs, the glycogen level, glycolysis and mitochondrial-related functions in MDMs were restored to the young level, which was consistent with the phenotype in the EP2 knockout group of elderly mice ( Figure 3f, g, h). Targeted metabolomics and carbon 13-labeled glucose tracing showed that the glucose flow in elderly MDMs treated with EP2 receptor inhibitors was restored, and the phagocytic function of MDMs was improved (Figure 3i, j). 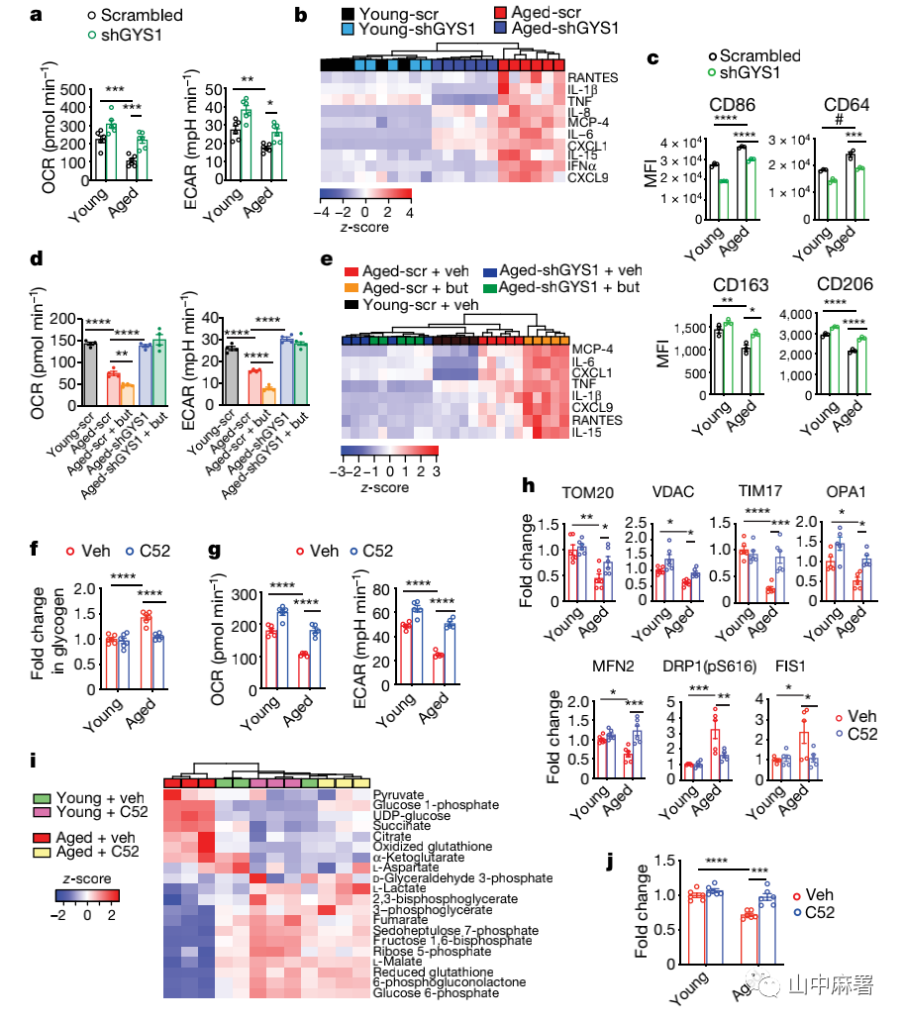 Can the administration of EP2 receptor blockers to ordinary elderly mice improve inflammation and cognitive function as in elderly mice with EP2 knockout? The researchers continued to give old mice the EP2 receptor blocker C52, which can pass through the blood-brain barrier, for one month, and found that the pro-inflammatory and anti-inflammatory factors in the plasma and hippocampus of the old mice returned to young levels, and they interacted with microglia. The activation-related lysosomal protein CD68 was down-regulated (Figure 4a-c).

After EP2 receptors were inhibited, carbon-13-labeled glucose traces were administered in brain microglia and peritoneal macrophages, and it was observed that glycogen synthesis was reduced, glycine hydrolysis and tricarboxylic acid cycle were enhanced (Figure 4d). In terms of cognitive function, blocking EP2 signal reversed the spatial memory deficits in old mice, and synaptic protein and synaptic plasticity also returned to young levels (Figure 4e, f, g). Therefore, after C52 treatment was given to ordinary elderly mice, the results observed were consistent with EP2 knockout mice.

Mitochondria are essential for synaptic neurotransmission and plasticity. The researchers assessed the integrity of the mitochondria in the synapse by detecting the degree of coupling between the ADP to ATP electron transport chain and oxidative phosphorylation in the synapse (Figure 4h). The respiratory control ratio increased significantly after inhibiting the EP2 receptor, indicating that the mitochondrial coupling of electron transport and ATP synthesis was improved. These data indicate that inhibition of inflammatory EP2 receptors can improve the mitochondrial health of synapses in the elderly.

EP2 receptors are highly expressed in elderly peripheral blood myeloid cells and microglia in the brain. When the researchers administered the EP2 receptor antagonist PF-0441894822, which could not pass through the blood-brain barrier, for six weeks, they found that not only did they reduce the level of pro-inflammatory factors in the blood, but the pro-inflammatory factors in the hippocampus also decreased, and significantly restored the hippocampus. Memory function and synaptic plasticity (Figure 4i-l). Transcriptomics analysis of peritoneal macrophages showed that after receiving PF-04418948 treatment, elderly mice significantly restored the immune and metabolic characteristics of their youth (Figure 4m). 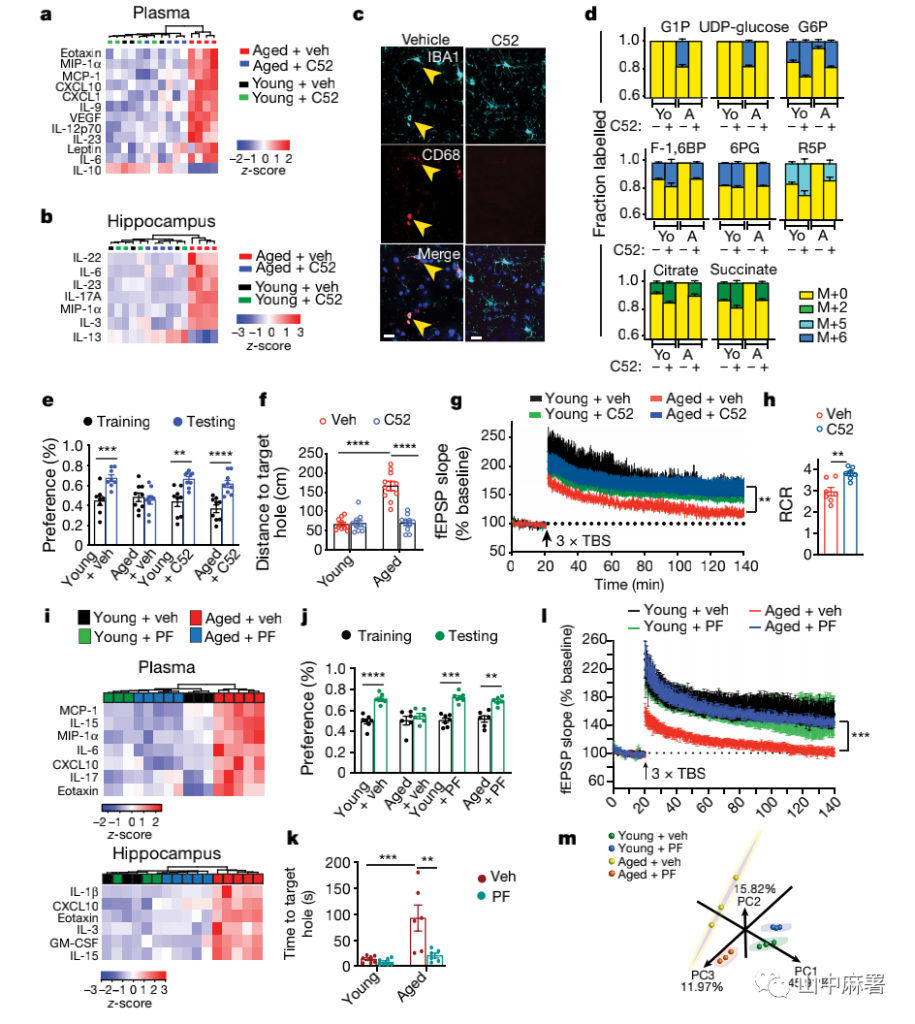 This study shows that the maladaptive inflammation and cognitive decline formed in the aging process may not be a static or permanent state, but can be reversed by inhibiting the inflammatory PGE2-EP2 signaling pathway in myeloid cells.

Therefore, inhibiting the metabolism of EP2 receptors in myeloid cells may be a new method for the treatment of senile diseases, which is more specific and targeted than non-steroidal anti-inflammatory drugs that target COX-1 and COX-2. .