Patients usually suffer from memory decline and weakened learning ability, accompanied by emotional regulation. Obstacles and loss of athletic ability greatly affect the development of individuals, families and even society.

Recently, a research team from the University of Leuven, Belgium, the Netherlands Institute of Neuroscience and other institutions published a research paper titled Restoring miR-132 expression rescues adult hippocampal neurogenesis and memory deficits in Alzheimer’s disease in the Cell Stem Cell journal, a subsidiary of Cell.

The study confirmed that adult hippocampal neurogenesis (AHN) is directly affected by the pathology of Alzheimer’s disease (AD) and revealed the potential therapeutic potential of increasing miR-132 levels in neurodegenerative diseases. 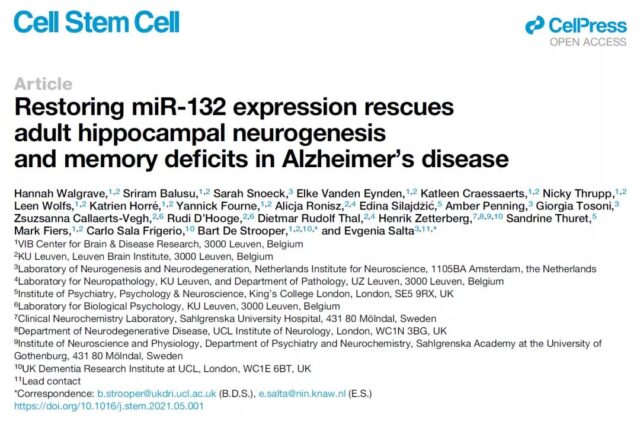 BrdU injection experiments showed that the AD group had impaired the potential of inducing the proliferation of neuron progenitor cells when running. The effect of AD on the expression of miR-132 and AHN injury in two different mouse models is emphasized.

Next, the research team evaluated the localization and expression of miR-132 in the adult dentate gyrus. They used green fluorescent protein tracking technology based on the Nestin promoter to label neural stem cells and neuron precursors in the dentate gyrus.

The results show that miR-132 is recruited by adult neural stem cells and progenitor cells as part of the response to exercise or aging-related stimuli, but the response to the above stimuli is lost in AD.

Next, the research team assessed whether miR-132 regulation is also involved in the differentiation of human neuron precursors into neurons.

In order to clarify the miR-132 regulatory mechanism of AHN, the research team used single-cell RNA sequencing to evaluate the miR-132-specific nestin transcription response. The results showed that there were five significant changes in mRNA, indicating that these transcripts may be regulated by miR-132 Part of the direct effector of a molecular network.

Finally, the functional rescue experiment showed that increasing the level of miR-132 induced the proliferation and differentiation of nerve cells in the dentate gyrus, and significantly improved the memory of the AD mouse model. 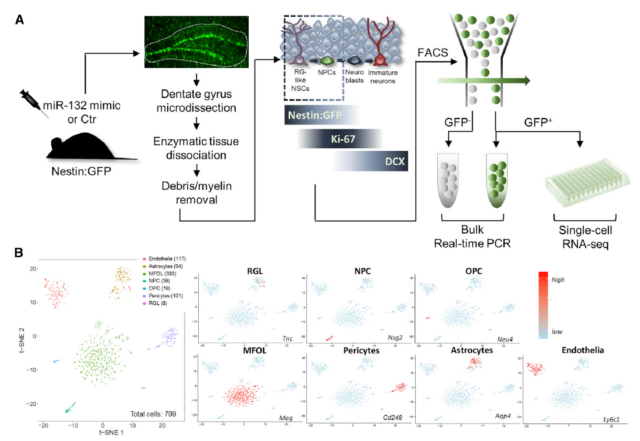 In conclusion, the study confirmed that miR-132 acts as a signal sensor in the nervous system and helps memory formation. Alzheimer’s disease leads to a lack of miR-132 and ultimately impairs adult hippocampal neurogenesis. Delineating the molecular and cellular mechanisms behind the neurogenic effects of miR-132 may provide impetus for identifying new strategies for therapeutic adult hippocampal neurogenesis in Alzheimer’s disease.