Diabetes and obesity are important factors that threaten human health. There are approximately 425 million diabetic patients in the world, and the overall prevalence and incidence have risen sharply. The vast majority of diabetic patients belong to type 2 diabetes, which is caused by insulin resistance and or insufficient insulin secretion. Improving insulin sensitivity or increasing insulin secretion is an important research direction in the scientific community. 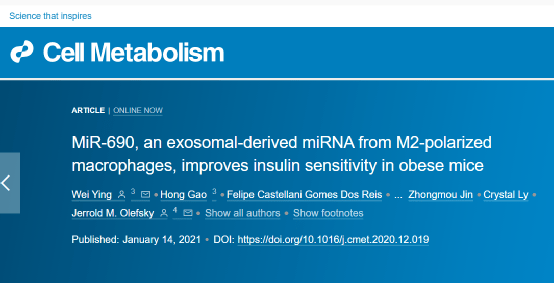 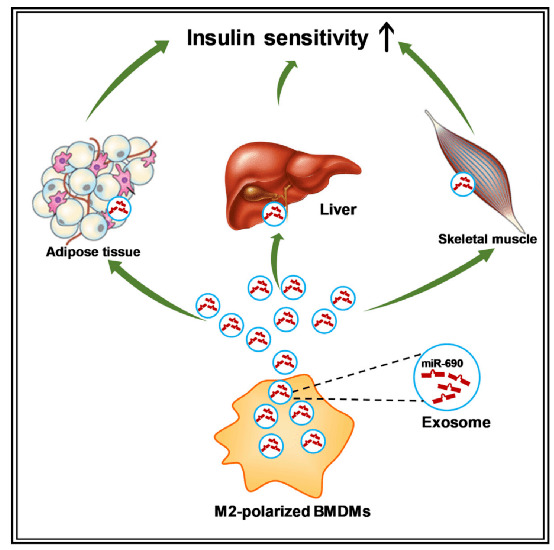 Subsequently, the research team confirmed through experiments that the insulin sensitization effect of exosomes is through miR-690, not other ribonucleic acid species or lipids and proteins. miR-690 is an insulin-sensitive microribonucleic acid. Experiments have shown that anti-inflammatory M2-like bone marrow stromal cells express more miR-690, and the metabolism of obese recipient mice fed with HFD for 4 weeks after M2 Exos treatment The abundance of miR-690 in tissues is higher. Compared with the obese control group, mice with miR-690 mimics had higher insulin-stimulated AKT phosphorylation levels in the liver, skeletal muscle and adipose tissue, indicating that miR-690 can promote insulin signaling, indicating that it acts as an insulin Enhance the function of miRNA.

Later, in order to further understand the regulatory role of miR-690, the research team determined through gene sequencing and gene function annotation that overexpression of miR-690 can lead to the up-regulation of JAK/STAT and insulin signaling pathways, while inhibiting glutathione metabolism, etc. path. Subsequently, the target gene of miR-690, Nadk , was identified by the target gene prediction algorithm TargetScan Mouse 7.2 .

Nadk is a gene encoding NAD+ kinase. A large number of experiments have shown that Nadk knockout can lead to greater activation of insulin signals; in cells transfected with siRNA-Nadk, the level of phosphorylated AKT is higher; compared with siRNA-Nadk or miR alone Compared with cells treated with 690 Exos, the cells treated with siRNA-Nadk and miR-690 Exos did not further improve the insulin effect. These experimental results all confirmed that the miR-690-Nadk axis plays a role in regulating cellular insulin signaling. 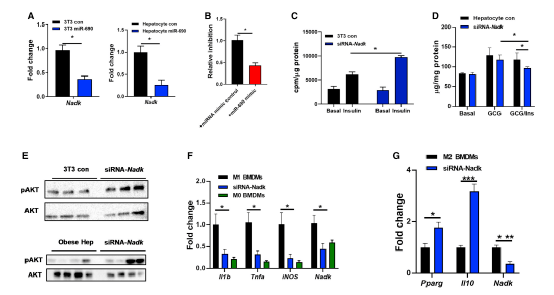 In summary, the researchers found that M2 polarized bone marrow-derived macrophages (BMDM) can secrete miRNA-containing exosomes (Exo), which can improve glucose tolerance and insulin sensitivity when administered to obese mice. miR-690 is highly expressed in M2 BMDM Exo, and acts as an insulin sensitizer in vivo and in vitro. Nadk is the true target mRNA of miR-690, and Nadk plays a role in regulating macrophage inflammation and insulin signaling. These data all indicate that miR-690 may be a new type of insulin sensitizing molecule for the treatment of metabolic diseases.