Cell Journal: Live a long time on a high-fat diet?

The ratio of carbohydrates in a medium-high-fat diet is in line with the dietary guidelines. Rats and fruit flies have the performance of prolonging healthy life. We look forward to the orderly development of research on this diet in the population. We will wait and see what the results will be right!

People take food as their heaven, and they cannot do without the word “eat” in their lives.

Exploring the effects of various dietary methods on health and longevity has always been a hot area of ​​research!

How dietary fat affects health has always been controversial.

Although, dietary recommendations generally advocate that the upper limit of the proportion of fat in a reasonable diet to the total dietary energy should be less than 30%. However, recent studies have pointed out that high-fat diets reduce the risk of death and cardiovascular disease (1). However, the long-term effect of dietary fat on health is still unknown.

The study found that an isocaloric medium-high-fat diet (IHF) can extend the lifespan of male rats and fruit flies by reducing free fatty acids (FFA), and proposed a new aging mechanism regulated by FFA.

Dynamic measurement evaluates biomarkers of biological aging, in which free radicals (ROS) and IL-6 are reduced, indicating that IHF can improve inflammation and oxidative stress.

In terms of health, memory and physical performance tests were performed on rats aged 63 to 66 weeks. Among them, the results of the shuttle box test showed that the correct rate of conditioned response in the IHF group was significantly higher than that of the control group. The current phenotype proves that the IHF diet not only prolongs the life span of rats, but also improves overall health. 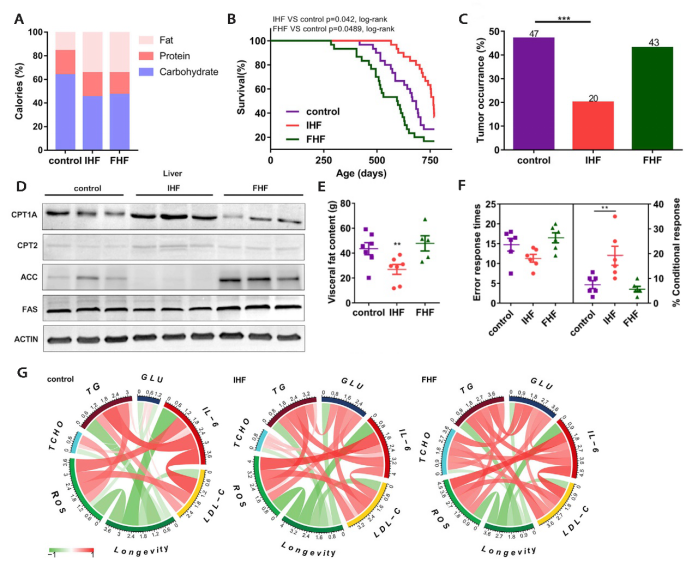 To clarify how IHF prolongs the lifespan of rats, a proteomic analysis was performed on liver samples from aging rats. Since nutrition-sensitive signaling pathways are widely involved in the regulation of longevity (3), statistics have found that IHF can improve oxidative stress and fatty acid metabolism.

Among them, PPRC1 (PPARγ co-activator 1) not only exists in the differentially expressed proteins of related pathways, but also has a significant negative correlation with changes in PA. And a study reported that overexpression of the Drosophila homologous gene PPRC1 can extend life span, indicating that PPRC1K may play an important role in the aging process of rats.

3. IHF can also extend the lifespan of fruit flies

Three different concentrations of lard were used for survival tests (Figure 6A). It was observed in w1118 fruit flies that IHF containing 7% (w/v) lard significantly prolonged the lifespan of fruit flies. Similar to the experimental results in rats, the total FFAs and PA in the IHF group were also significantly reduced, and the expression of Drosophila homologous PPRC1 (dh-PPRC1) mRNA was up-regulated.

The life span of wild-type fruit flies in the IHF group is longer than that of the dh-PPRC1 RNAi mutant fruit flies, and by observing the changes in lifespan caused by IHF diet with or without PA, it is indicated that the reduction of PA promotes IHF by up-regulating the cognate PPRC1 of fruit flies Mediated life extension.

4. The content of PPARγ/PPRC1 in human liver is negatively correlated with life span

Bioinformatics analysis shows that the protein involved in fatty acid metabolism PPARγ may mediate the effect of PA on PPRC1 expression. Through PPRC1 transgenic flies and in vitro experiments, it was found that IHF can significantly reduce PA, thereby up-regulating PPRC1 through PPARγ, improving oxidative stress and inflammation, and prolonging life.

To assess the relationship between PPARγ/PPRC1 in the liver of human subjects and age. It was found that in human liver tissue, the expression of PPARγ/PPRC1 mRNA was strongly negatively correlated with age. 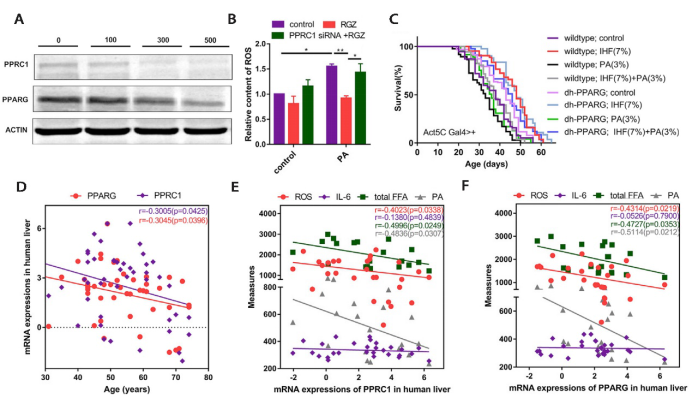 For a long time, dietary guidelines have advocated limiting total fat intake in order to maintain good health, but there is a great controversy about the relationship between dietary fat and disease risk.

In this study, a series of experiments were conducted in rats, fruit flies and in vitro using a global detection method to detect the impact of high-fat diet on healthy lifespan by strictly controlling energy intake. This study proves for the first time that compared with normal diet, IHF diet is beneficial to health in many aspects, and provides an important guideline for optimizing diet structure and feeding methods to explore the direction of life extension. 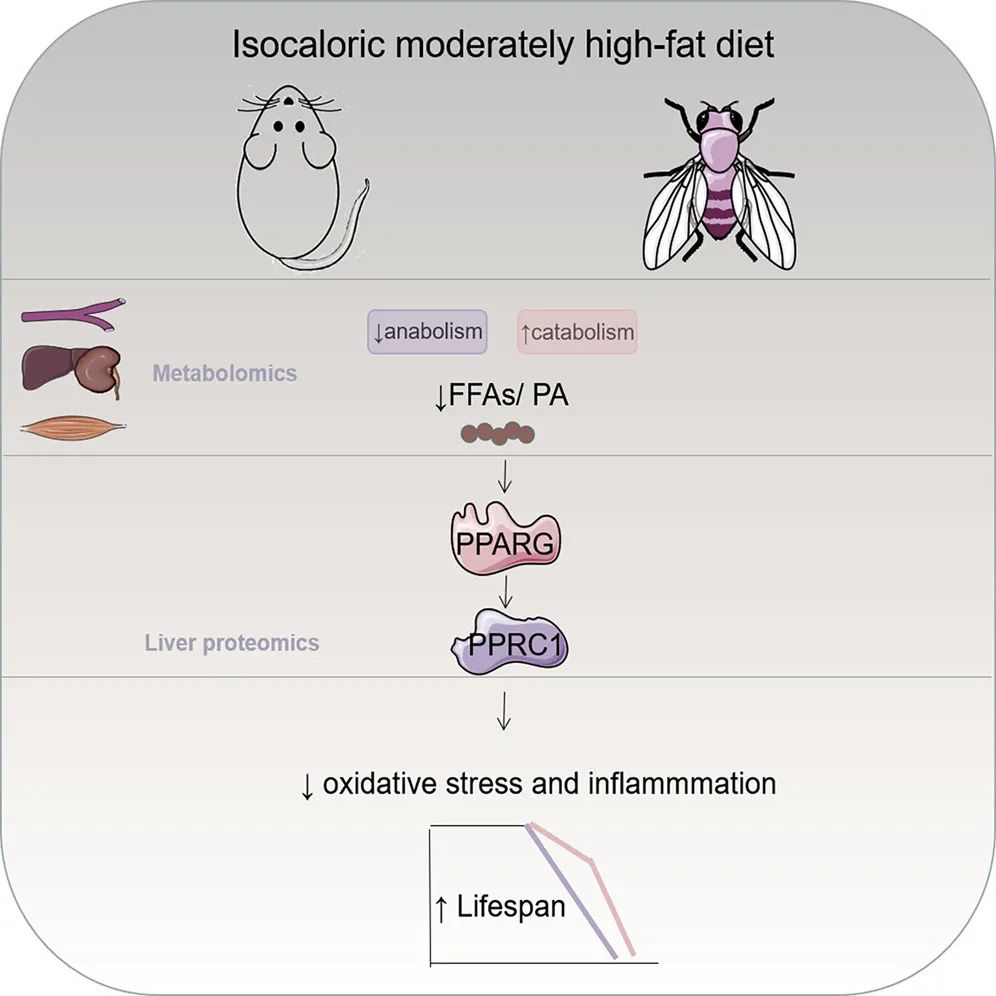 When it comes to high-fat diets, I have to mention the “ketogenic diet” that has been very popular in recent years. Compared with the isocaloric medium-high-fat diet (IHF, 35% of calories come from fat), the ketogenic diet (KD, fat exceeds 70%, low carbohydrate intake) can produce ketone bodies to simulate hunger.

There are different opinions on the impact of the ketogenic diet on human health.

On the one hand, experiments in mice have shown that the ketogenic diet can reduce middle-aged mortality and improve the memory of aging mice.

On the other hand, the researchers followed 462,934 volunteers for an average of about 16 years. It is shocking to conclude that the ketogenic diet increases the risk of death for people who are not obese. To maintain a long life, the ideal ratio of carbohydrates is 50%-55%.

Therefore, the ratio of carbohydrates in the medium-high-fat diet is in line with the dietary guidelines. Rats and fruit flies have the performance of prolonging healthy life. I look forward to the orderly development of research on this diet in the population. What will be the result? , Let’s wait and see!