Exosomes are extracellular vesicles that transmit signal molecules from donor cells to recipient cells. The cargo of exosomes, including proteins, DNA and RNA, can target recipient tissues and organs, which play an important role in disease development.

Exosomes are considered extracellular vesicles (EVs), which are cup-shaped structures with a diameter of 30-150 nm with a lipid bilayer membrane. The information molecules carried by exosomes include lipids, proteins and nucleic acids. These types of substances are protected by lipids from degrading the bilayer membrane and can be transported from donor cells to recipient cells (Figure 1).

What is the exact function of exosomes? Initially, exosomes were described as “garbage dumps”, taking useless or harmful intracellular material out of the cell. Recently, exosomes have been defined as “signal boxes” that transmit information between cells or organs.

Now, more and more studies have clarified the functions of exosomes. Exosomes can participate in pathological and physiological processes, including angiogenesis, vascular calcification, immune inflammation, and cell apoptosis. Fibrosis, tumor development, tissue repair and insulin resistance. The current review in this article will focus on the effect of exosomes on insulin resistance. 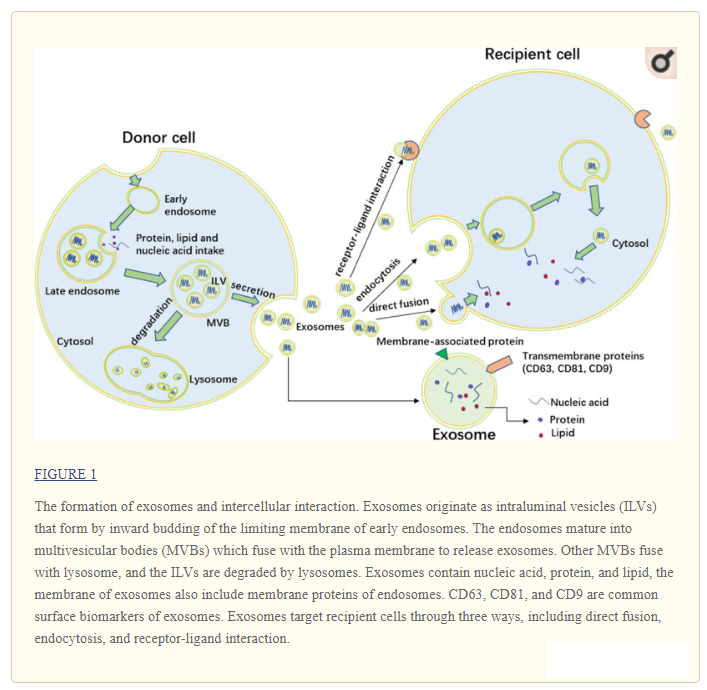 As a key regulator of glucose metabolism, insulin is secreted by pancreatic β cells after blood sugar rises. Indeed, the role of insulin mainly promotes the uptake of glucose by skeletal muscle and adipose tissue, and reduces liver gluconeogenesis and glycogen breakdown.

Insulin is also involved in protein metabolism in bone metabolism and lipid storage in adipose tissue. Recently, scientists discovered that the brain is also a target tissue for insulin. Insulin signaling has many complex branches, and each branch can exhibit a physiological function.

Phosphorylation of Akt is involved in most insulin signal transduction pathways, so we usually regard the level of p-AKT as a sign of insulin sensitivity.

In addition to glucose metabolism, insulin also participates in protein and lipid metabolism. In fact, we usually define the effect of insulin on glucose metabolism as insulin resistance. When the human body develops insulin resistance, the compensatory secretion of insulin will cause hyperinsulinemia, leading to a series of pathophysiological changes, such as impaired pancreatic islet function, increased nutrient consumption, hyperlipidemia, and cardiovascular damage. Kind of metabolic diseases and diabetic cardiomyopathy.

When lipid storage exceeds the limit, lipids will be stored in other ectopic tissues with stronger metabolism, such as liver and skeletal muscle. Adipose tissue can store triglycerides and release free fatty acids and glycerol. Free fatty acids can cause insulin insensitivity.

White adipose tissue plays the most important role in storing fatty acids. By increasing lipid synthesis or limiting lipolysis, white adipocytes can store lipids to prevent accumulation of toxic lipids in the liver and skeletal muscle. A study showed that the percentage of fat stored in the white adipose tissue of obese people decreased significantly because of the promotion of lipid storage in non-fat tissues.

In contrast, brown/beige fat cells are active when they directly take up glucose, which is a response to β-adrenergic signaling and insulin, which increases energy expenditure. Obesity has an adverse effect on the function of each type of fat cell, leading to insulin resistance. In addition to the function of storing fat, adipose tissue is also a very important endocrine organ.

Adipokine is a general term for hormones secreted by fat cells. It is divided into two groups, which promote insulin action or inhibit insulin action respectively. Leptin and adiponectin are adipokines that increase insulin sensitivity. Adipose tissue can release tumor necrosis factor-α (TNF-α) and interleukin-6 (IL-6) as inhibitory adipokines, thereby inhibiting the action of insulin.

Obesity is the most important risk factor for insulin resistance, but the specific pathogenesis needs further study. Recently, it has been demonstrated that exosomes act as communicators between cells. Exosomes contain many kinds of substances, which can affect the function of recipient cells.

The role of adipose tissue exosomes in obesity-related insulin resistance

In recent years, the research on the exosomes of adipose tissue chronic inflammation in adipose tissue has attracted people’s interest (Figure 2). The study found that exosomes secreted by mouse adipose tissue (obesity model) induced the activation of macrophages through the TLR4 / TRIF pathway, and the retinol binding protein 4 (RBP4) in these exosomes was induced in macrophages Played a role in activation.

Sonic hedgehog (Shh), such as insulin-resistant adipocyte exosomes (IRADEs), is a key regulator of M1 macrophage polarization through Ptch/PI3K signaling. They found that the exosomes of IRADE-treated macrophages may promote insulin resistance in adipose tissue by reducing the expression of insulin receptor substrate 1 (IRS-1) and hormone-sensitive lipase (HSL).

The authors revealed that by targeting peroxisome proliferator-activated receptor γ (PPARγ), the key role of ATM-derived exosomes in regulating insulin sensitivity is miR-155. In addition, compared with a control group of obese wild-type mice, miR-155 knockout mice are much more sensitive to insulin.

In addition to inflammatory factors, ATM also secretes exosomes to regulate insulin sensitivity. In addition, the exosomes of macrophages can regulate the metabolism of fat cells. Adipocyte-derived exosomes also reduce the level of M2 macrophages, which are cells that inhibit inflammation. 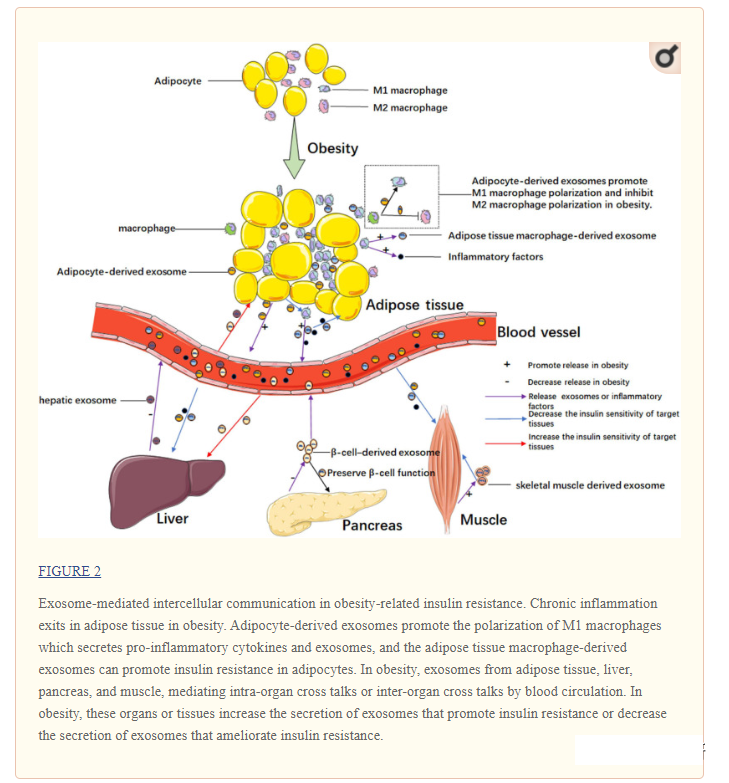 In addition to participating in inflammation-induced insulin resistance in adipose tissue, exosomes derived from fat cells also cross-talk with other organs to induce obesity-related insulin resistance (Figure 2). Mleczko et al. believe that the expansion of adipose tissue may cause local tissue hypoxia and inflammation in obesity. It is revealed that the exosomes of hypoxic adipocytes impair insulin-stimulated glucose uptake by reducing the phosphorylation of AKT.

Exosomes in the plasma of obese women can reduce insulin-stimulated glucose transport. Interestingly, the inhibition of exosomes can be restored by heating the hypoxic exosome preparation to 40°C for 30 minutes before cell processing. Since the effect of hypoxia on glucose transport is heat-labile, the authors speculate that enzyme activity may be the reason for this effect.

Studies have found that PTEN, a protein phosphatase, which is present in electric vehicles, is present in hypoxic 3T3L1 fat cells, which can reduce the phosphorylation of AKT. However, they did not find the exact molecular mechanism. Gastric bypass bariatric surgery can not only reduce body weight and insulin resistance, but also change the microRNA content of circulating adipocyte exosomes isolated from peripheral blood.

Among the microRNAs altered by exosomes, 29 microRNAs related to insulin resistance were altered after surgery. Similarly, 48 microRNAs targeting 78 mRNAs are significantly associated with branched-chain amino acid levels, which are associated with insulin dysregulation.

These studies indicate that exosomes derived from fat cells may act in distant organs and participate in insulin resistance related to obesity.

The miR-130a-3p derived from liver exosomes mainly inhibits fat formation by up-regulating the expression of fatty acid synthase (FASN) and PPARγ at the protein level. In addition, miR-130a-3p can target the PH domain-rich leucine repeat protein phosphatase 2 (PHLPP2), increase the levels of p-AKT and p-AS160, and ultimately promote the transport of GLUT4.

Studies have confirmed that exosomes produced by intestinal microbes induced by high-fat diet (HFD) may impair insulin signaling and glucose metabolism in vivo and in vitro. They observed that HFD changed the bacteria in the gut. 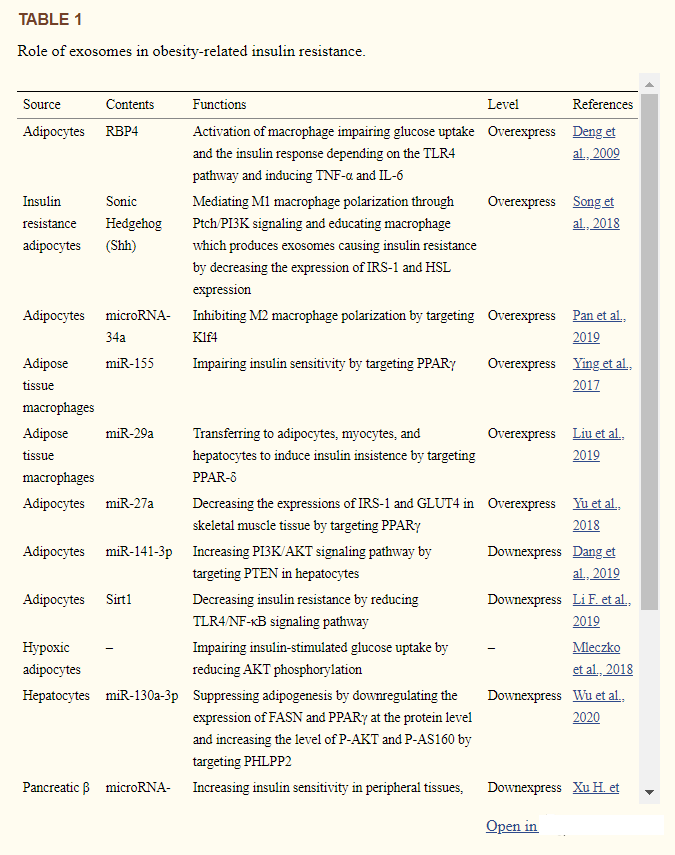 Exosomes as biomarkers of insulin resistance

The release of exosomes depends on the state of the body. Exosomes can protect substances from the degradation of lipid bilayer membranes. Exosomes are found in various body fluids, such as plasma, saliva, breast milk, sweat, tears, and urine. Therefore, exosomes can be easily obtained from body fluids. According to reports, exosomes are important for liquid biopsy in many diseases, such as breast cancer, hepatocellular carcinoma, prostate cancer, osteoarthritis and atherosclerosis. Similarly, the use of exosomes for the early diagnosis of insulin resistance is a promising method. Exosomes will be the most promising body fluid biopsy. As shown in Table 2, some potential exosomal biomarkers can be used to track insulin resistance. 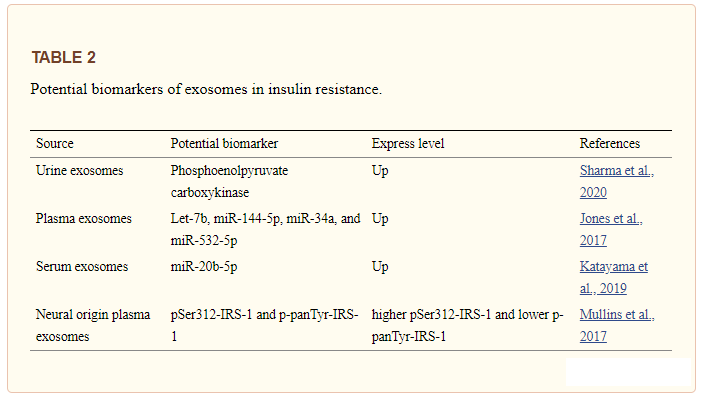 Studies have found that the exosomes of human umbilical cord mesenchymal stem cells (hucMSC-ex) may have a therapeutic effect on T2DM. They found that injection of hucMSC-ex can significantly improve hyperglycemia in T2DM rats. HucMSC-ex can increase insulin sensitivity by increasing the activation of p-IRS-1 and p-AKT and inhibiting the secretion of pro-inflammatory cytokines, which can inhibit the activation of insulin signaling pathways.

These exosomes can promote glucose uptake and glycolysis in skeletal muscle by affecting the membrane translocation of GLUT4 and glucose metabolism-related enzymes. After activating the insulin signal, hucMSC-ex increased the expression of p-GSK3β and glycogen synthase, thereby improving glycogen synthesis in the liver. In addition, hucMSC-ex can not only promote insulin secretion, but also inhibit STZ-induced β cell apoptosis.

Studies have also found that exosomes derived from adipose stem cells (ADSCs) are taken up by macrophages. In addition, these exosomes carry active STAT3, which can promote the expression of arginase 1 in macrophages, thereby inducing the anti-inflammatory M2 phenotype. ADSC-derived exosomes alleviate diet-induced obesity and improve glucose tolerance and insulin sensitivity. 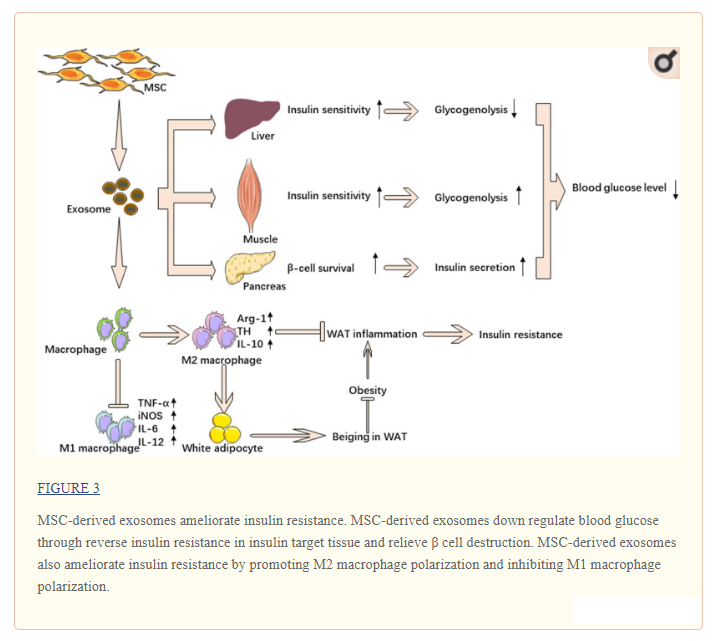 Exosomes act as mediators to transfer the contents from parent cells to recipient cells, and affect the pathophysiology of humans. The research in this article focuses on obesity-related insulin resistance.

Exosomes may be a potential diagnosis and treatment tool for insulin resistance. Liquid biopsy is a very valuable test, it reflects the overall physical condition. Exosomes are potential biomarkers of insulin resistance because they can be altered by the pathophysiological state of the human body.

Exosomes are membrane structures that can protect internal molecules from degradation. We can use exosomes to detect changes in the patient’s nucleic acid levels. With the in-depth study of exosomes, people will better understand the advantages of exosomes as a liquid biopsy tool.

The application of bone marrow mesenchymal stem cell exosomes has been studied for many years. The effect of MSC-exosomal therapy on insulin resistance has been confirmed in several studies. Exosomes have great advantages in the treatment of insulin resistance.

First of all, exosomes have the physiological activities of their parental cells, and can replace the parental cells to play a therapeutic role.

Secondly, the immunogenicity of exosomes is low and will not cause immune rejection in patients.

Third, exosomes are vesicle structures that do not pose a tumorigenic risk to organisms.

In the future, we will use advanced technologies and methods to cleverly use exosomes to diagnose and treat insulin resistance.