Science: The gene that loves sweets has been found and reveals the influence of obesity genes on the brain

The gene that loves sweets found and Influence of obesity genes on brain. Changing the expression of obesity-related genes can produce behavioral changes. Mice lacking one of the genes reduced their interest in sweets.

Obesity is one of the top ten chronic diseases identified by the World Health Organization (WHO). Nearly 40% of people in the world are overweight and 13% are obese. Obese people are more likely to develop diabetes, cardiovascular disease, chronic kidney disease, and even cancer.

The strongest genetic association with obesity is a group of genetic mutations in a gene called FTO. FTO gene, therefore also called obesity gene, more than 40% of people have one copy of these variants, 16% of people have two copies, directly leading to a 70% increase in the risk of obesity. Although the FTO gene has a significant effect on obesity, the specific mechanisms of these common mutations that cause obesity are still unclear.

Recently, researchers from the University of Chicago in the top international academic journal Science published a research paper titled: “Extensive pleiotropism and allelic heterogeneity mediate metabolic effects of IRX3 and IRX5”. The study described a set of gene mutations that affect obesity-related genes in Expression in the brain and adipose tissue.

Studies have found that changing the expression of obesity-related genes can produce behavioral changes. Mice lacking one of the genes reduced their interest in sweets. Changes in the expression of obesity-related genes are associated with changes in metabolism and behavior, indicating that the combined effects of these variants increase the risk of obesity. The researchers hope that this result will help to better understand the mechanisms that make some people more susceptible to obesity.

The researchers first discovered that the genetic variation in the FTO gene physically interacted with the other two genes IRX3 and IRX5, indicating that these two genes may be related to obesity.

Then, the researchers designed to knock out the IRX3 and IRX5 genes in mice and found that these mice were thinner, which proved that they are indeed related to obesity.

Earlier, some scientists thought that FTO mutations might affect fat tissue or hypothalamus, so the research team wanted to know if it would be through the two genes IRX3 and IRX5.

The researchers used a mouse model that lacked obesity-related regions in the FTO gene to observe the expression of IRX3 and IRX5 genes in different tissues of mice.

The researchers found that the expression of IRX3 and IRX5 in adipose tissue and hypothalamus were reduced. Interestingly, this change in expression level only occurs during embryonic development, but not in adult tissues. Similar results have been seen in experiments with cultured human hypothalamic neurons. This suggests that obesity may be “natural”. 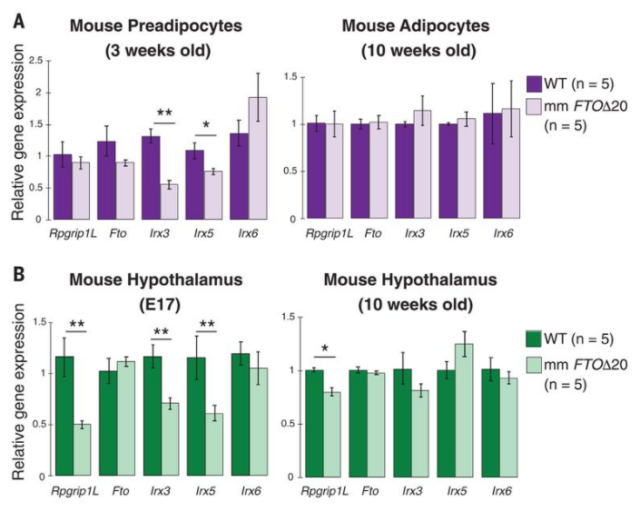 Expression of FTO mutations in the brain and fat

To understand the role of these genes in the hypothalamus, the researchers used IRX3 knockout mice and investigated whether these mice had different eating behaviors.

The researchers were surprised to find that mice lacking LRX3 had less interest in sweets.

So, is this gene the same in humans?

Researchers used data from 23 and Me, a genetic testing service, and found that obesity-related FTO gene mutations are also a powerful predictor of human sweet food preferences. This indicates that in addition to controlling metabolism, this gene also affects behavioral functions.

The researchers showed that the FTO genome region actually contains multiple independent variants, which are all inherited together, and they each affect the expression of IRX3 and IRX5 in adipose tissue and hypothalamus, leading to differences in metabolism and food preferences. In essence, adult obesity is a manifestation of multiple combined effects established in the early stages of development.

The author of the paper said that the expression of these genes outside the hypothalamus is higher than that in the hypothalamus. In the next step, researchers will continue to study the role of IRX3 and IRX5 in the brain.