Nature: Reverse aging! Fecal transplant can reverse brain aging.  The intestine is the human body’s largest immune organ. There are about 40 trillion bacteria in the human intestine, which play an important role in health. They affect people’s weight, digestion, resistance to infection and autoimmune disease risk, and even It can control the body’s response to cancer treatment drugs.

On August 9, 2021, researchers from the University of Cork in Ireland published a research paper titled “” in the journal “”, a sub-Journal of Nature.

The study shows that by extracting the gut microbiome from young mice and transplanting them into old mice, the brain aging of aging mice can be reversed, including many effects of aging on learning, memory and immune disorders.

This groundbreaking research opens up a potential new therapeutic approach in the form of microbial intervention to slow down brain aging and related cognitive problems.

In this study, the researchers transplanted fecal microbes from the intestines of young (3-4 months) or old (19-20 months) donor mice into elderly recipient mice (19-20 months) middle.

The study found that the transplantation of the gut microbiota in young mice reversed the changes related to aging in the immune system of old mice. The brains of elderly mice that received fecal transplants from young donors also regained their vitality and contained metabolites and gene regulation patterns similar to those of young mice. 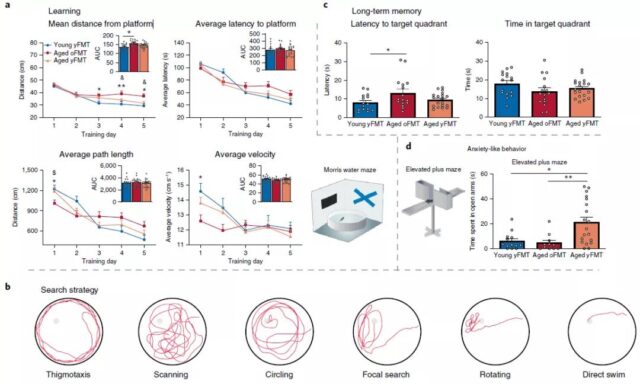 The influence of stool transplantation on learning, memory and behavior

In addition, fecal transplantation of young mice improved the behavior of older mice on multiple cognitive tests of learning, memory, and anxiety.

Using a maze test on mice, it was found that the transplantation of the fecal microbiota from young mice to old mice caused the old mice to find their targets faster.

Specifically, the researchers found that the chemicals in the brain’s areas related to learning and memory (the hippocampus) are more like the chemicals in young mice after microbiota transplantation.

In short, by extracting the microbiome from young mice and transplanting them into old mice, many effects of aging on learning, memory and immune disorders can be reversed.

The researchers emphasized that mice are different from humans because they are handled under controlled conditions and they have a very clear genetics, diet, and microbiome. The living environment of humans is very different from that of mice.

The researchers said that these findings reveal the potential of the gut microbiome as a therapeutic target to promote healthy aging. Future research needs to explore how specific bacteria in the microbiome or their metabolites can cause these effects.