Nature: Coffee makes people smarter and can change the functional connectivity of the brain

Nature: Coffee can change the functional connectivity of the brain.  Coffee is the most popular beverage in the world. It is estimated that 3 billion cups of coffee are consumed every day in the world.

Coffee is the most popular beverage in the world. It is estimated that 3 billion cups of coffee are consumed every day in the world. Because it contains a large amount of caffeine, it is often consumed by people to refresh their minds and improve work efficiency. Interestingly, the effect of long-term consumption of it on the inner functional network of the brain is still largely unknown.

Recently, a research team from the Faculty of Medicine of the University of Minho in Portugal published a research paper entitled “Habitual coffee drinkers display a distinct pattern of brain functional connectivity” in the journal “Molecular Psychiatry”, a sub-Journal of Nature. The research is based on the mechanism. Reveals the effect of regular coffee drinking on the brain network.

Studies have found that, compared with people who do not drink coffee, regular coffee consumption improves exercise control, increases alertness, and is conducive to learning and memory.

In this study, the researchers used functional magnetic resonance imaging (fMRI) technology to compare the brain connections and structures of 31 people who drink coffee regularly and 24 people who do not drink coffee at rest, at work, and shortly after drinking coffee. .

Through analysis, it was found that during breaks, compared with those who do not drink coffee, the connectivity between the two brain regions of people who drink coffee frequently decreases, which indicates that motor control and alertness are improved.

In other areas of the brain, including the cerebellum and between the thalamus and the cerebellum, more effective connection patterns were also found, indicating an improvement in motor control. 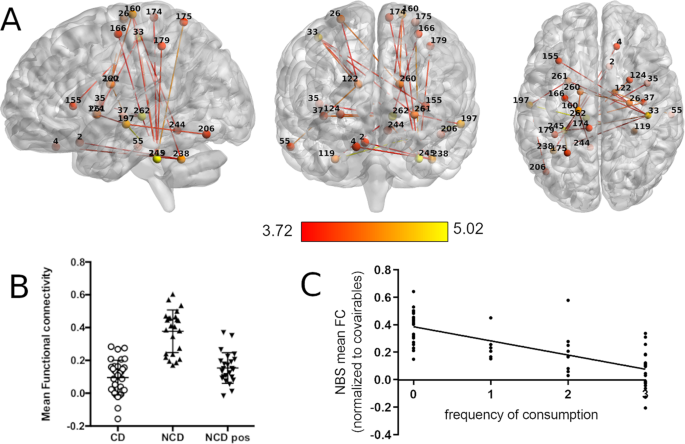 Drinking coffee changes the functional connectivity pattern of the brain

Further research results include that among people who drink coffee regularly, the dynamic activity observed in several cerebellum and subcortical regions of the brain increases, which is associated with reducing absent-mindedness, improving concentration, alertness and arousal, and enhancing learning and memory. Consistent. Simply put, these changes mean an improvement in the ability to concentrate.

What is even more surprising is that this brain difference not only appears in those who drink coffee regularly, but also those who do not drink after drinking a cup of coffee. Therefore, it shows that coffee can exert these changes in a short period of time, and these effects are caused by coffee.

This study is the first time that such a detailed study has been conducted on the effect of regular coffee drinking on the brain network. Through the use of functional magnetic resonance imaging technology, real-time observation of the effect of coffee on the functional connection and structure of the brain, as well as the difference between coffee drinkers and non-coffee drinkers.

Researchers believe that these findings will help to provide a mechanism of insights into some of the effects observed in existing coffee research, such as improved motor control, increased alertness, and is conducive to learning and memory.

To date, previous studies have shown that caffeine and coffee have effects in improving attention, alertness and arousal, motor control, and learning and memory. These new findings add new content to the research in this field and provide insights into the structural changes behind these effects.