Coffee can reduce the risk of liver cancer?

Not long ago, the New England Journal of Medicine (NEJM), the head of the four major medical journals, published a review paper titled Coffee, Caffeine, and Health. The paper pointed out that a large amount of evidence suggests that drinking coffee does not increase the risk of cardiovascular disease and cancer, and drinking 3 to 5 cups of coffee a day is associated with a reduction in the risk of several chronic diseases.

Among all malignant tumors, the incidence of liver cancer ranks sixth in the world, and the mortality rate ranks fourth in the world. According to the “Global Burden of Disease 2016” data, the number of deaths due to liver cancer worldwide in 2016 was 1,240,201.

Recently, a number of research institutions in Australia have collaborated and published a paper titled: Estimates of the global reduction in liver disease-related mortality with increased coffee consumption: an analysis of the Global Burden of Disease Dataset in the Journal of Alimentary Pharmacology and Therapeutics. 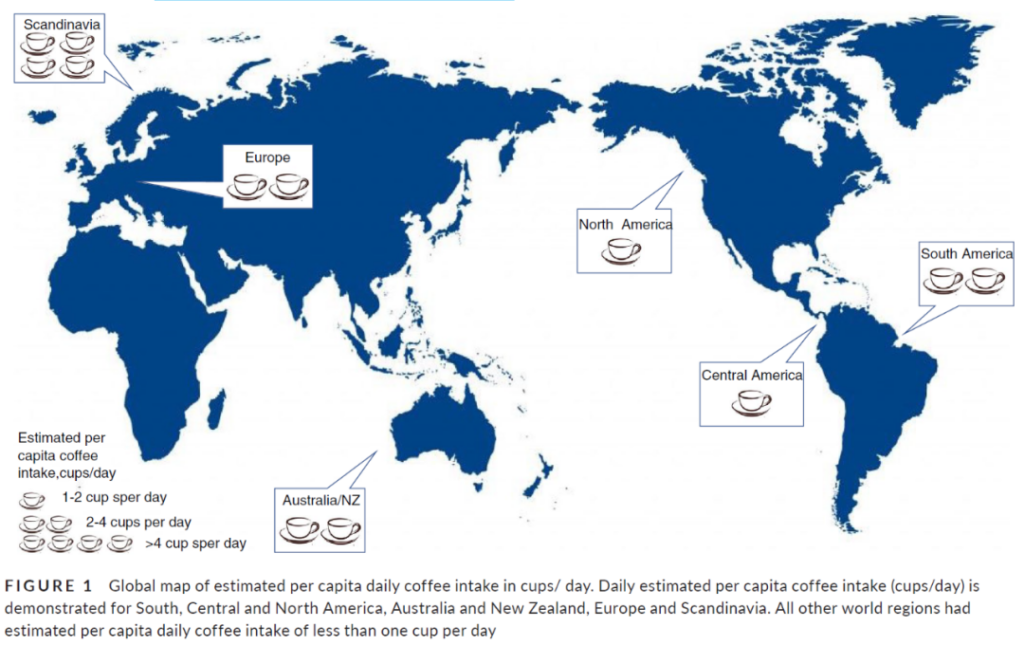 Daily coffee consumption per person in various regions of the world

From the statistical data, in Europe, South America, Australia and New Zealand, each person consumes more than 2 cups of coffee per day. Among them, Scandinavia in Europe has the most, with more than 4 cups per person per day. From a global perspective, the average person is less than 1 cup per day.

Next, the researchers wanted to know what would happen if everyone in the world started drinking two or more cups of coffee a day.

The researchers studied the data in the 2016 Global Burden of Disease data set and extracted statistics related to liver cancer. They found that the number of deaths from liver cancer in 2016 was 1,240,201.

The researchers then searched for statistics on drinking coffee and added these two sets of data to a model that showed the link between drinking coffee and reducing liver cancer. The model shows that if everyone in the world drinks two cups of coffee a day, the number of deaths from liver cancer will decrease by 452,861, and if everyone drinks four cups, the number of deaths will decrease by 723,287.

Therefore, the research team believes that the government and health institutions should start to encourage coffee consumption to reduce the incidence and mortality of liver cancer.

Coincidentally, on January 8, 2020, the team of Academician Gu Dongfeng of the Chinese Academy of Medical Sciences Peking Union Medical College Hospital published a paper in the European Journal of Preventive Cardiology. A long-term follow-up study of more than 100,000 healthy Chinese showed that drinking at least a week Three times tea is associated with healthier and longer life expectancy.