Eating spicy food may reduce the risk of cancer!

Eating spicy food may reduce the risk of cancer! After an average of 10 years of follow-up, more than 500,000 people have big data confirming the benefits of spicy food.

First of all, let’s do a small survey at the beginning. Do you usually eat spicy food? How many days do you eat spicy food every week?

Speaking of chili, it can be said that many people order food. Compared with other feelings, the spicy stimulation brought by chili often makes us exhale and clamp another chopstick. This is the charm of chili—— Especially in a variety of specialty cuisines, such as Sichuan and Hunan cuisine, chili is even more brilliant. But in fact, peppers bring us more than just a pleasant sensation, peppers can also help us reduce the incidence of certain cancers!

This article published in the “International Journal of Epidemiology” brings us the benefits of eating spicy food: it can help us reduce the incidence of gastrointestinal tumors, including esophageal cancer. And the sample size of this study is huge enough, more than 500,000 people, let us quickly take a look! 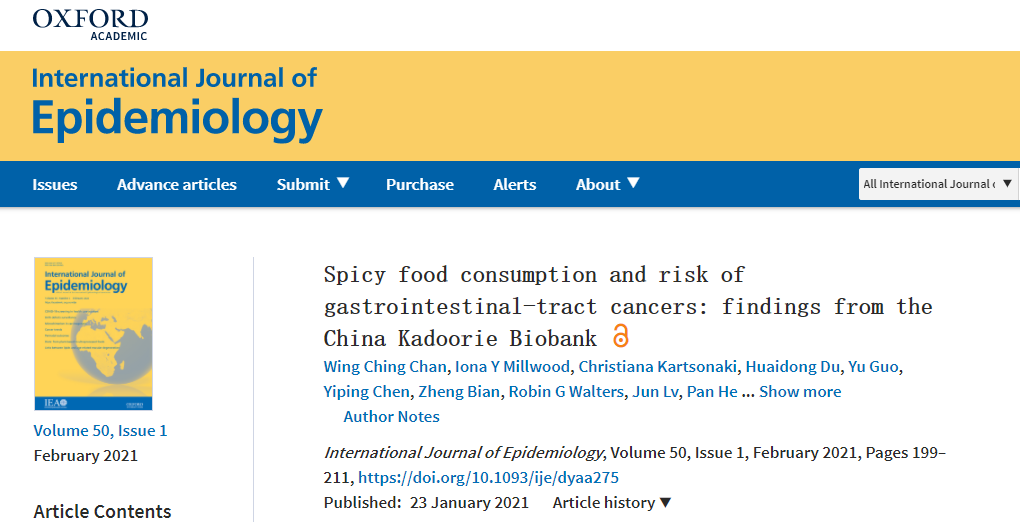 This is a large-scale prospective study that included a total of 512,715 participants from 5 cities and 5 rural areas in China, aged 30 to 79 years old. The researchers collected information in the form of electronic questionnaires, completed the recruitment from 2004 to 2008, and conducted two surveys of relevant situations at the end of 2008 and 2013-2014 respectively. At the same time, blood samples of the research subjects were taken for data analysis.

Of course, this chili also includes chili products, including fresh chili, dried chili, chili oil, seasoning, sauce, curry, etc., including directly added as a cooking product, and also used as a dipping or topping after the food is cooked. In the survey, it was mainly to find out how many times a week the crowd ate chili—that is, whether it was spicy or not spicy. In the end, a total of 510,101 research subjects were included in the analysis, with an average age of 52 years, of which 59% were women. First, in this study with an average follow-up time of 10.1 years, a total of 20,600 subjects were diagnosed with cancer during the course of the study. After statistical correction and analysis of the data, it was found that the higher the frequency of spicy food, the lower the risk of cancer of the digestive tract!

We have compiled the following table based on the data in the article, and compared it with the baseline data of not eating spicy or hardly eating every month. You can take a look at the specific data:

For people who eat spicy food almost every day, their risk of multiple gastrointestinal tumors has been reduced by more than 10%. The higher the frequency of spicy food, the lower the risk of esophageal cancer.

For people who don’t drink or smoke, the benefits of eating chili will be higher. For people who don’t smoke, people who eat spicy food every day (6-7 days/week) Compared with the baseline data, the risk reduction can reach 43%! Almost nearly reduced the risk of cancer by half! Similar results were obtained in non-drinking people. It can be said that if you do not drink or smoke, then eating chili can better reduce the risk of cancer. 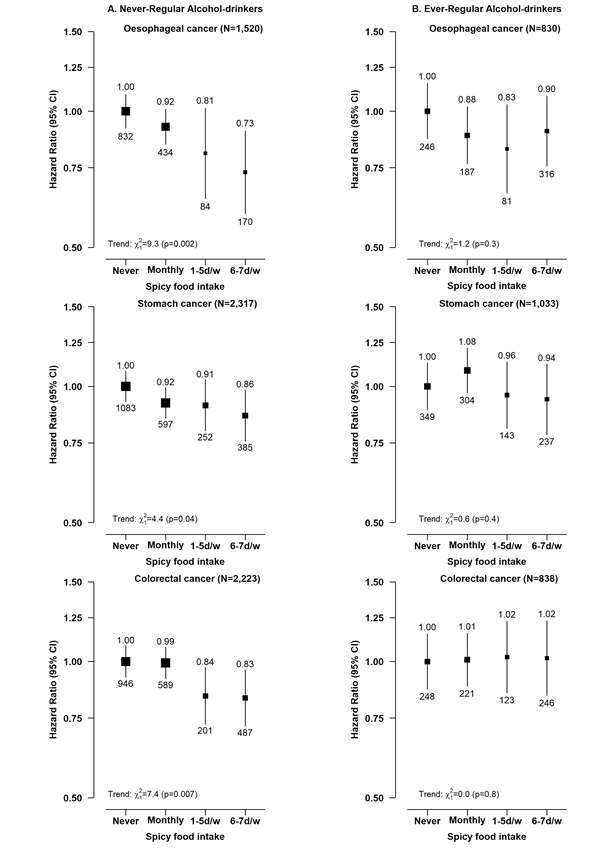 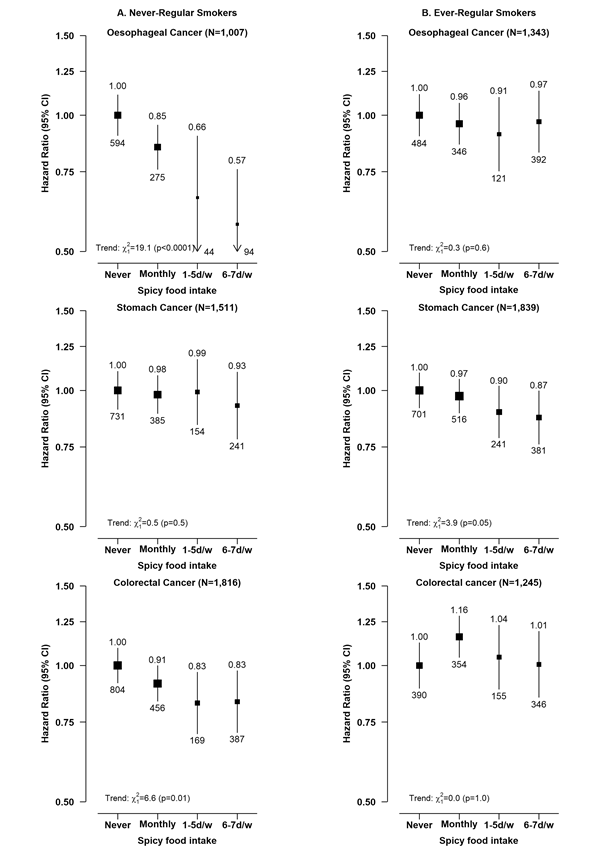 This is the first Chinese, prospective study to study the risks of peppers and gastrointestinal tumors. At the same time, the median follow-up time is more than 10 years and the number of people exceeds 500,000. It is clear in the article that peppers can reduce the risk of esophageal cancer, and for gastric cancer. And colorectal cancer still needs further data support. Of course, it is a pity that the article did not mention the connection between spicyness and risk. After all, there is a considerable distance between slightly spicy and abnormal spicy.

The main biologically active substance in pepper is capsaicin. In previous animal studies, it has been found that capsaicin has a variety of carcinogenic effects, mainly by stimulating and damaging the gastrointestinal mucosa, but it can inhibit the growth of Helicobacter pylori and reduce fat accumulation This is a factor that can reduce the risk of cancer. In fact, the author said that the dose of pepper may be a key indicator. If the dose exceeds this dose, the harm is greater than the benefit, and below this, the health benefit is higher.

In fact, the benefits of eating spicy food are not only here. A previous study published in the journal Nature showed that compared with mice fed with ordinary food, the number of hematopoietic stem cells in mice fed with spicy food was higher. It is much higher, which proves that pepper may be beneficial to hematopoiesis. 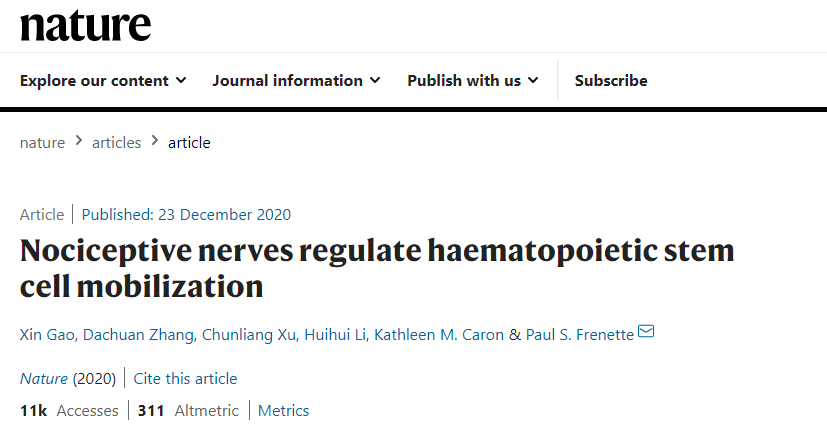 Of course, if you want to figure out the specific dosage and spiciness of spicy food every day, further research is needed. Based on the existing research data, eating spicy food in moderation can help us reduce part of the risk of cancer, and it may also help. Promote hematopoiesis.