LNP delivers mRNA to lower cholesterol. Lipid nanoparticles deliver single-base editing system mRNA to reduce cholesterol once and for all.

On May 7, 2019, Verve Therapeutics received US$58.5 million in Series A financing from companies such as Google.

It plans to use the funds to develop a once-and-for-all gene editing therapy for heart disease.

Through lipid nanoparticles (LNP), CRISPR The single-base editing system is delivered to the cell to realize the prevention and treatment of heart disease.

On May 7, 2019, Verve Therapeutics received US$58.5 million in Series A financing from companies such as Google. It plans to use the funds to develop a once-and-for-all gene editing therapy for heart disease.

Through lipid nanoparticles (LNP), CRISPR The single-base editing system is delivered to the cell to realize the prevention and treatment of heart disease.

After the news was announced, it attracted widespread attention and reports.

At the JPMorgan Chase Healthcare Conference that is currently being held, Professor Sekar Kathiresan, the founder of Verve Therapeutics, announced that he will launch a clinical trial of gene therapy for heterozygous familial hypercholesterolemia (HeFH) based on single-base editing technology.

Hypercholesterolemia (HeFH). There are genetic mutations in the liver of people with HeFH, which can lead to high cholesterol levels, and lead to heart attacks or strokes early in life, which seriously threaten life and health.

The disease is a relatively common genetic disease, affecting one in every 200-500 people worldwide.

At present, Praluent produced by Biopharma and Repatha produced by Amgen both target PCSK9 to reduce cholesterol and can treat familial hypercholesterolemia, but these two drugs need to be injected every two to four weeks. , The annual cost is more than 14,000 US dollars, it is difficult to be widely used.

But if drugs based on CRISPR gene therapy can be effectively prevented and treated for life with a one-time injection, it will obviously save a lot of money, and this product that brings real benefits to patients will also be fully reimbursed.

Now the experiment has been over for more than 6 months, and the treatment level is still very good. 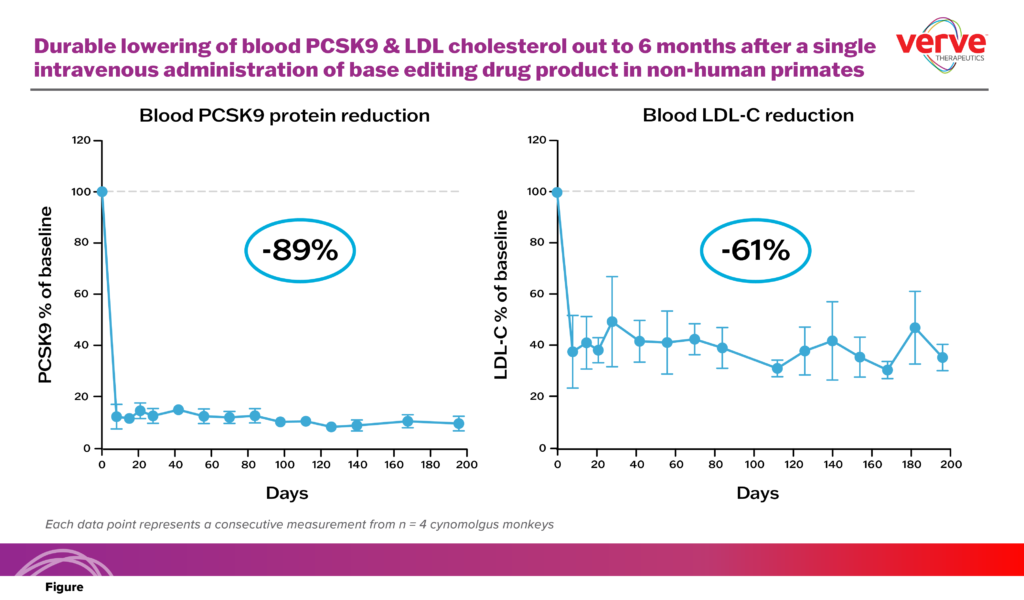 At this year’s JP Morgan Medical Conference, Professor Sekar Kathiresan said that this is the first time that the effect of single-base editing in the liver of non-human primates can be sustained.

On the whole, this means that the dream of reducing LDL once and for all will be realized, and the experimental data makes people very confident that there will be a continuous reduction throughout the life cycle of the animal.

Professor Sekar Kathiresan also stated that toxicology experiments will be carried out in 2021, and IND will be applied for, and the first human clinical trial will be conducted in 2022.

Verve Therapeutics was founded in 2018 by Professor Sekar Kathiresan and others. It is dedicated to the research and development of gene editing technology to help adults optimize the genome structure and prevent and treat coronary artery disease.

Professor Sekar Kathiresan, a professor at Harvard Medical School, former director of the Center for Genomic Medicine at Massachusetts General Hospital, and director of the Cardiovascular Disease Program of the Broad Institute, is a superstar in the field of heart disease research.

In addition to the PCSK9 gene, Professor Sekar Kathiresan also identified six other target genes, all of which can be edited with CRISPR.

These genes will reduce blood lipid levels after being edited, thereby reducing the risk of heart disease, preventing and treating the heart disease.

Before obtaining approval for clinical trials, Verve Therapeutics must also clear many obstacles.

Because statins and other treatments have good results, they want to replace them.

Safety will be the key to obtaining regulatory approval.

Early non-human primate experiments have proved the efficacy and durability of this method.

In addition, the off-target problem faced by single-base editing has always been a major obstacle to clinical application.

The gene editing therapy is based on the single-base editing system of mRNA delivered by lipid nanoparticles (LNP), which is very similar to the delivery strategy of the new coronavirus mRNA vaccine.

Now the success and large-scale production of the new coronavirus mRNA vaccine will greatly reduce LNP The cost of delivery vectors and the cost of mRNA-based therapy will also greatly promote the development of mRNA gene editing components delivered through LNP.