Can intermittent fasting improve long-term memory? New research confirms that this is related to the “longevity gene”

Can intermittent fasting improve long-term memory?  Intermittent fasting (IF) strategies have been shown to lose weight and extend lifespan in many species and improve cognitive abilities, including extensive health improvements during the aging process of rodents, primates, and humans. Recent studies have emphasized that switching to a healthy diet after fasting can be used as a non-drug intervention for patients with hypertension and metabolic syndrome.

Intermittent fasting is usually divided into three forms: one is to eat at a limited time every day, that is, to narrow the eating period to 6 to 8 hours; the other is the so-called “5:2”, that is to eat normally 5 days a week , The other two days eat very little; another is fasting every other day, that is, eating normally on the first, third, fifth, and seventh days, and completely fasting on the second, fourth, sixth, and eighth days (drinking water or meal replacement during the period).

Previously, intermittent fasting has also been shown to enhance learning ability and memory consolidation, and partially reverse the impairment of age-related rodents’ motor coordination and memory function. But researchers still know little about the mechanism behind it.

In a new study published on May 25, 2021 in “Molecular Psychiatry” (IF=12.38), an international research team led by King’s College London, UK, confirmed through mouse studies that the strategy of fasting every other day is a gene that promotes longevity An effective means of expression can improve long-term memory consolidation in mice.

The longevity gene, namely Klotho. Its discovery came from an accident. The story begins in 1997. When a group of scientists was studying spontaneous hypertension, they accidentally harvested a mouse with a phenotype similar to human aging. This kind of mouse was named Klotho mouse. The study found that Klotho-deficient mice showed signs of premature aging at 5 to 8 weeks of age, and their lifespan was shortened by 80%; while the lifespan of mice overexpressing Klotho was greatly prolonged, and female mice were prolonged by 19%. The male rat prolonged by 30.8%. In short, the lack of Klotho leads to premature aging, and the increase in Klotho expression leads to longevity.

Although Klotho is mainly produced in the kidneys, it is also highly expressed in certain brain regions, including the dentate gyrus (DG) of the hippocampus, especially in its mature neurons. The function of Klotho in the brain is still a mystery, but previous studies have suggested that Klotho plays an important role in cognition, because the increased serum level of a protein it produces is related to the enhanced cognitive ability of humans and rodents.

In this study, the researchers divided the female mice into three groups: a standard diet group (control), a calorie-restricted diet group, and an intermittent fasting group that was fed every other day. The latter two groups consumed 10% less calories than the control group.

In three months, compared with the other two groups, the mice in the intermittent fasting group showed better long-term memory consolidation ability. 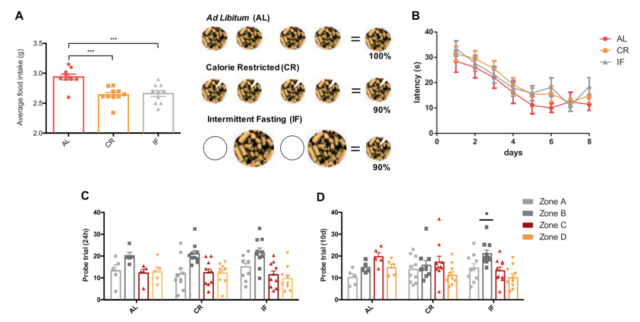 The researchers studied the brains of these mice and confirmed that Klotho is an important regulator of adult hippocampal neurogenesis, and proposed that it is a new molecular mechanism through which intermittent fasting may improve cognitive ability . 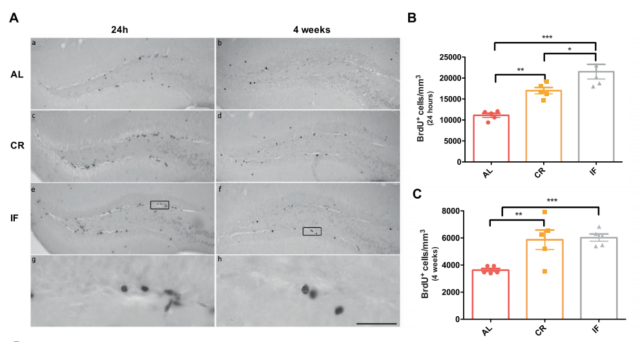 The corresponding author of the study, Dr. Sandrine Thuret, of the Department of Basic and Clinical Neuroscience at the Institute of Psychology and Neuroscience at King’s College London, said: “We now have a deeper understanding of why intermittent fasting promotes adult neurogenesis. Our research The results show that Klotho is not only necessary, but also plays a central role in adult neurogenesis. This research shows that intermittent fasting can be an effective means to improve human long-term memory.”

The researchers now hope to repeat this study among human participants in order to further explore the effects of intermittent diets.