The regulatory effect of diet on memory T cells

The effect of calorie restriction on memory T cells

CR has a significant effect on the migration, internal cell state and function of CD4 and CD8 memory T cells.

In mice, 50% CR can induce the redistribution of circulating memory T cells from secondary lymphoid tissues and blood to the bone marrow (BM). During CR, naive B cells and monocytes will also accumulate in BM. This Niche may serve as a “safe haven” or “metabolic refuge” for immune cells.

The redistribution of memory T cells is coordinated by steroid hormones and glucocorticoids, which can induce the expression of BM homologous receptor CXCR4 on T cells. At the same time, a lot of remodeling of BM during CR to enrich T cell nutritional factors, red blood cells and adipocytes, all of which can cooperate to recruit, retain and protect memory T cells.

During CR treatment, BM fat cells are an important source of hormones that can make up for the loss of peripheral white adipose tissue (WAT). Peripheral WAT is the main storage site of memory T cells after the infection is cleared. In peripheral WAT, memory T cells show increased steady-state proliferation, enhanced effector functions and fatty acid utilization. 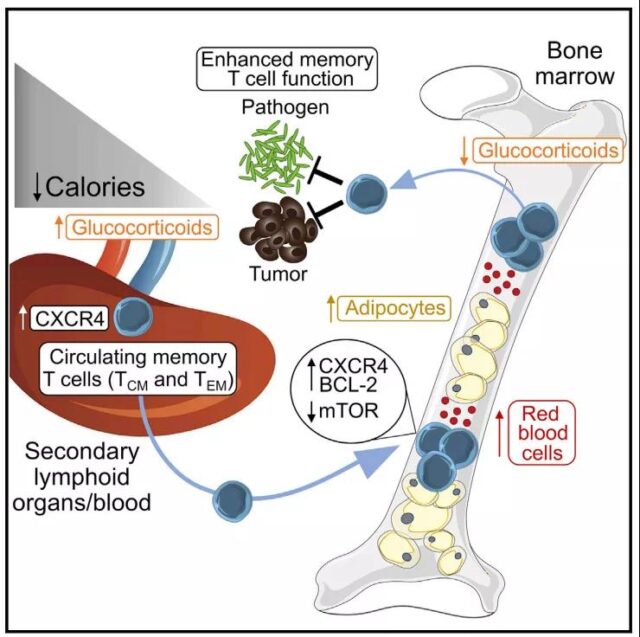 In general, low food intake and adequate nutrition may be the ideal state to promote longevity and general health. However, during CR, the metabolic pathways and fuel sources used by memory T cells are still unclear; in addition, there is no systematic assessment of the duration and extent of CR; CR intervention methods; age of use (old age shows CR has no obvious effect), so it is reasonable The use still requires a lot of research.

The dietary protein is severely reduced (0.6% compared to 18% in the control diet), leading to protein energy malnutrition (PEM), which greatly reduces the ability of memory CD8 T cells to exist for a long time.

Dietary metabolites, such as serine, are necessary for the proliferation and function of effector CD8 T cells. T cell activation under the condition of a serine-free diet reduces the development of memory T cells. In the process of proliferation, serine is necessary for the synthesis of nucleotides, which highlights the basic role of this metabolite in T cell biology. Other metabolites that promote T cell activation include methionine. L-arginine regulates several metabolic pathways of CD4 T cells. 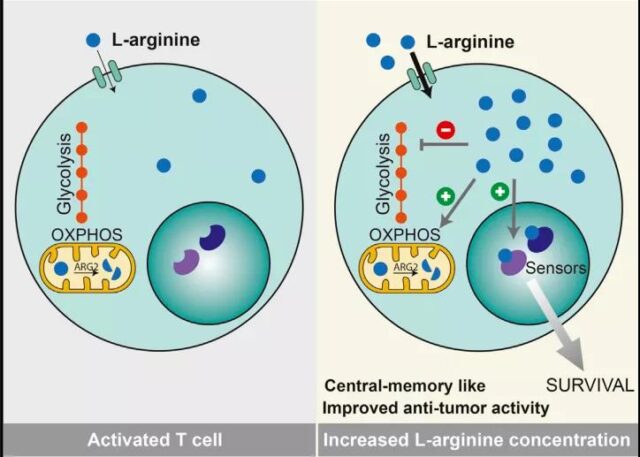 Obesity is associated with metabolic syndrome and chronic low-grade inflammation. It can be confirmed that obesity can cause abnormal T cell activation and T cell memory response. But whether there are advantages or disadvantages depends on specific scenarios. The pro-inflammatory characteristics of memory T cells caused by obesity can cause the body’s immune pathological damage; but the pro-inflammatory characteristics can enhance the effect of anti-tumor treatment under certain conditions.

PD-1/PD-L1 block, PFS and OS were higher in the high BMI group (Reference 4)

Dietary intake and composition are the main causes of changes in the intestinal microbiota. The microbiota includes hundreds of millions of beneficial bacteria that have co-evolved with humans, affecting almost all aspects of host physiology.

In terms of immune response, acetic acid, propionic acid and butyrate are produced in large quantities by the bacterial flora, which has a powerful immunomodulatory effect and is essential for the development and function of various CD4T cell populations.

The SCFAs produced by the microbiota can assist the activation of CD8+ T cells, the development of memory CD8 T cells, and the maintenance of survival. Butyrate produced by metabolism is very important and induces memory programs by promoting mitochondrial oxidative metabolism in effector CD8+ T cells. 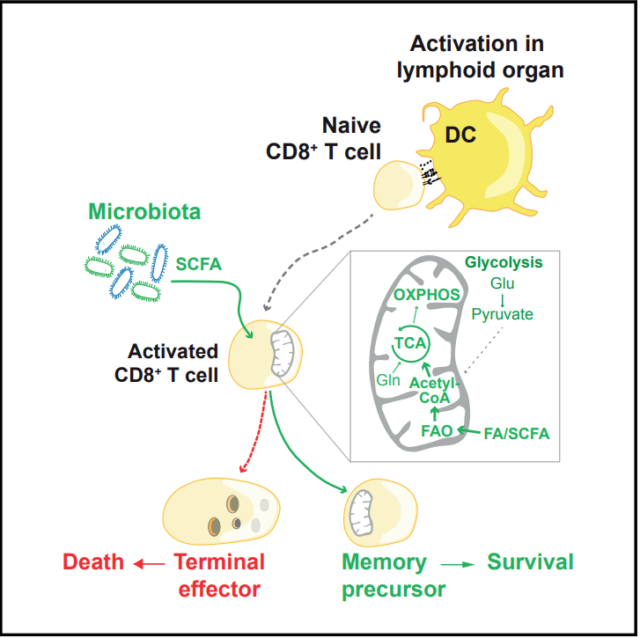 balanced diet is the key. Too much or too little, the preference for diet must be corrected.