Western diet may increase the risk of intestinal inflammation and infection.  Paneth cells in the intestine can regulate the body’s immunity and infection. In Crohn’s disease, gene mutations and environmental triggers can make Paneth cells Loss of cell function.

A few days ago, in a research report titled “Western diet induces Paneth cell defects through microbiome alterations and farnesoid X receptor and type I interferon activation” published in the international journal Cell Host & Microbe, scientists from Washington University School of Medicine and other institutions Studies have found that the intake of Western diet may damage the body’s immune system function and increase the risk of infection and inflammatory bowel disease. 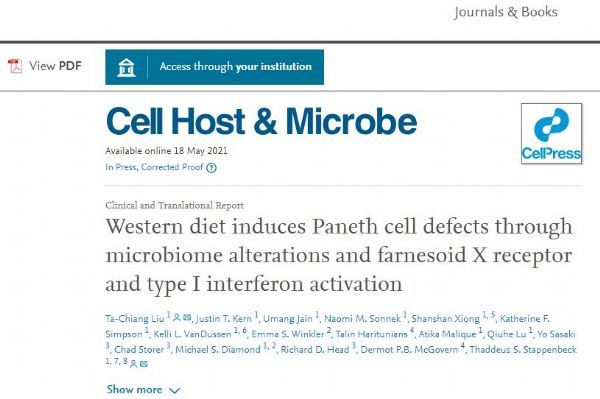 The results of this study conducted in mice and humans showed that high-sugar and high-fat diets can damage Paneth cells, which are a type of immune cell in the intestine, which can help control the occurrence of inflammation in the body; When the cells cannot function normally, the immune system in the intestine will be more prone to inflammation, which will make the individual more susceptible to inflammatory bowel disease. At the same time, it will also interfere with the body’s effective control of pathogenic bacteria. The staff developed a new method to regulate the body’s intestinal immunity by restoring normal Paneth cell function.

In this research report, the researchers wanted to find out the cause of Paneth cell dysfunction in the patient’s body through research. They analyzed a database containing the demographic and clinical data of 400 people, including the Paneth cell analysis of each person’s body. The evaluation found that a higher body mass index is directly related to the abnormal and unhealthy Paneth cells observed under the microscope. That is to say, the higher a person’s BMI, the worse the Paneth cells in the body will look like. This correlation is more applicable to healthy people and Crohn’s disease patients.

In order to better understand this association, the researchers studied two genetically modified mouse strains that are prone to obesity. These mice have been overeating for a long time because of the mutations carried in their bodies. A regular diet does not produce a feeling of fullness. To the researchers’ surprise, the Paneth cells in these obese mice look normal. In humans, obesity is usually caused by excessive intake of a diet rich in fat and sugars. Therefore, 40% of the calories in the diet given to mice by the researchers come from fat or sugars, which is similar to a typical Western Diet; after two months of eating this type of diet, the mice will become obese and the Paneth cells in their body will look abnormal. 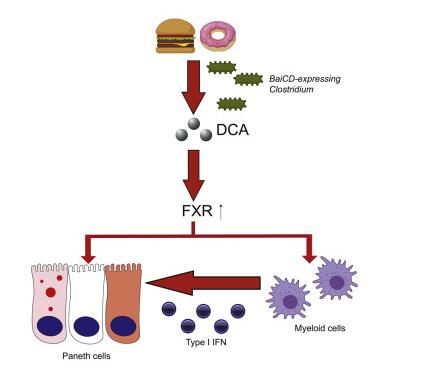 The role of FXR loop.

Researcher Liu said that obesity itself may not be a problem, and eating too much healthy diet will not affect the function of Paneth cells. A high-fat, high-sugar diet may be the problem. Four weeks after the mice returned to the diet of healthy mice, Paneth cells in their bodies returned to normal.

However, can people who are accustomed to Western diets change their diets to improve their body’s intestinal immunity? The power remains to be further researched and explored later. The study in this article is an 8-week experiment. In the human body, obesity does not occur overnight, and of course it does not occur within 8 weeks.

When people become obese, there are often 20 or even 30 years. Of course, it is also possible that a person’s diet has been ingested for too long, so that he has passed a point of no return. Even if he changes his diet in time, the Paneth cells in his body will not function well. It will recover, and later researchers need to conduct more in-depth studies to observe whether this process can be reversed in the human body.

Researchers are currently investigating whether lipids or carbohydrates play a major role in damaging Paneth’s cell function. At the same time, they are also beginning to study some new methods to restore normal Paneth by targeting bile acids or the two immune molecules mentioned above. Cell function and improve intestinal immunity.

In summary, the results of this article reveal the mechanism link between poor diet and intestinal innate immune suppression, and also uncover the effect of FXR activation in the process of intestinal inflammation.