Chronic inflammation: Long-term inflammation will lead to cancer!  “Inflammation” is the collective term for many diseases of our ancestors. Inflammation, especially the “redness, swelling, heat, and pain” manifested by visible skin infections, is easy for the ancients to think that this is a kind of disease caused by some kind of “fire”. This is also true in the history of medical development of other nations. “Inflammation” in English also comes from “flame” (fire).

On this point, the ancient Chinese medicine and Western medicine have a consensus. Inflammation is one of the important characteristics of cancer. About 20% of cancers are caused by chronic inflammation. Inflammation can play a role in different stages of tumor occurrence, development and malignancy.

If you encounter infection and injury, the body inflammation is usually local, transient, and belongs to acute inflammation. The social environment and lifestyle, etc., will produce systemic chronic inflammation (SCI), which is the basis of cardiovascular disease, cancer, diabetes, chronic nephritis, non-alcoholic fatty liver, autoimmune diseases and degenerative diseases.

Since the development of science, people have gradually realized the important impact of systemic chronic inflammation on body tissues. 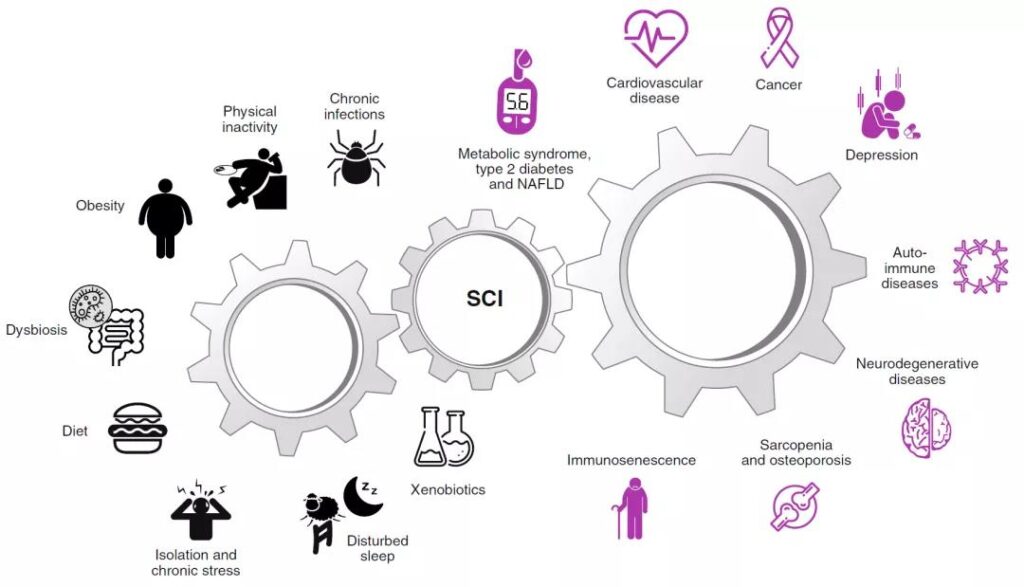 Inflammation is a defense mechanism against the invasion of life by harmful substances. It is characterized by the activation of immune cells and other non-immune cells to protect the host from bacteria, viruses, toxins and infections by eliminating pathogens and promoting tissue repair and recovery.

In childhood and adulthood, inflammation maintains a stable internal environment in normal humans. However, in age-related diseases such as cardiovascular disease, diabetes, cancer and Alzheimer’s disease, chronic inflammation is the common pathological basis, and may be an important factor in the increase in the incidence and mortality of most degenerative diseases.

Systemic chronic inflammation (SCI) state refers to a low-level non-infectious (ie “sterile”). It is caused by the existence of certain external factors (social, psychological, environmental) and biological factors and the prevention of the resolution of acute inflammation. It is characterized by the activation of immune cells and the immune components are usually different from those during the onset of the disease.

Systemic chronic inflammation can lead to several diseases, which are the main causes of global disability and death (over 50%), such as cardiovascular disease, cancer, diabetes, chronic kidney disease, non-alcoholic fatty liver and autoimmune And neurodegenerative diseases.

The changes in the inflammatory response from short-term to long-term can lead to the breakdown of immune tolerance and lead to major changes in all tissues and organs and normal cell physiology, which will increase the risk of various non-communicable diseases in the young and old. 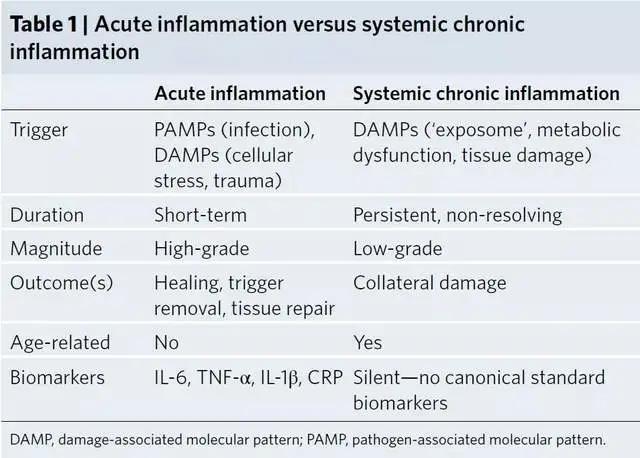 Markers of acute inflammation are not necessarily suitable for systemic chronic inflammation. For example, the early work of Roubenoff and his colleagues showed that the levels of IL-6 and IL-1Ra (not IL-1β or TNF-α) in the individual’s circulatory system increase with age. However, when the health status of the elderly was strictly controlled, no differences were found in the expression of IL-1 and IL-6 between the young and the elderly. Currently, systemic chronic inflammation still has no typical biomarkers.

With the increase of age, the immune system reaches its peak in the young and middle stage, and then begins to gradually age. The systemic chronic inflammatory state of the elderly is partly caused by cellular senescence, which is characterized by the stagnation of cell proliferation and the development of multiple senescence-associated secretory phenotypes (SASP).

One of the outstanding features of SASP is the increased secretion of pro-inflammatory cytokines, chemokines and other pro-inflammatory molecules. This phenotype of senescent cells can in turn promote a variety of chronic diseases, including insulin resistance, CVD, pulmonary hypertension, chronic obstructive pulmonary disease, emphysema, Alzheimer’s disease and Parkinson’s disease, macular degeneration, osteoarthritis and cancer.

How senescent cells produce SASP is not completely clear, but current research points to endogenous and exogenous societies. The joint effect of environmental and lifestyle risk factors may lead to the occurrence and development of SASP.

The average life expectancy of individuals in agricultural countries is relatively short, and some people die before the signs of aging. Among these people, there are relatively few health problems related to systemic chronic inflammation, not because of genes or short life expectancy, but because of the social and natural environment where people live.

For example, the level of outdoor activities is higher, the diet is mainly composed of fresh or minimally processed food sources, and there is less exposure to environmental pollutants. In addition, people living in these environments usually have circadian rhythms, and the social pressures they experience are usually different from those in an industrialized environment.

Industrialization has significantly reduced the movement of people as a whole. A study showed that 31% of people worldwide lack exercise, and the level of inactive people in high-income countries is higher than in low- and middle-income countries. In the United States, approximately 50% of American adults lack physical activity.

Skeletal muscle is an endocrine organ. During muscle contraction, it can secrete some cytokines and small molecular weight actin into the blood, which may have the effect of reducing systemic inflammation. Researchers have found in healthy individuals, breast cancer survivors, and type II diabetes patients that lack of exercise is directly related to increased anabolic resistance, increased CRP levels, and increased levels of pro-inflammatory cytokines. These effects, in turn, promote a variety of inflammation-related pathophysiological changes, including insulin resistance, dyslipidemia, endothelial dysfunction, hypertension, and decreased muscle mass (sarcopenia). The above-mentioned pathological changes will promote the increased risk of CVD, type II diabetes, NAFLD, osteoporosis, various cancers, depression, dementia and Alzheimer’s disease.

Assuming that there is a complex balance in the gut ecosystem, if this balance is broken, its function and integrity will be impaired, leading to low-grade chronic inflammation. Therefore, it is very important to determine the factors that may cause intestinal flora imbalance and intestinal permeability hyperpermeability.

These incentives may include the abuse of antibiotics, non-steroidal anti-inflammatory drugs, and proton pump inhibitors, as well as insufficient exposure to microorganisms due to improved sanitation and reduced contact with animals and natural soil. In addition, diet may also be one of the reasons.

In the past 40 years, the traditional diets of most countries lacked fiber-rich foods such as fruits and vegetables, and more refined grains, alcohol and ultra-processed foods, especially foods containing emulsifiers. This may change the composition and function of the intestinal flora, and is related to the increase in intestinal permeability and the epigenetic changes of the immune system, which ultimately leads to low-grade endotoxemia and chronic inflammation.

Trans fatty acids and salt in the diet can also affect inflammation. For example, researchers have shown that high salt can cause macrophages to exhibit a pro-inflammatory phenotype. In this process, the initial CD4+ T cells differentiate into Th-17 cells (the latter is highly inflammatory), and the expression and anti-inflammatory activity of regulatory T cells are reduced.

In addition, high salt intake can cause adverse changes in the composition of the intestinal flora. The observed decrease in the number of lactobacilli in high-salt diet animals and humans is an example. There is ample evidence that diet is very related to mortality. Poor diet is one of the main risk factors for death, and deaths caused by excessive sodium intake account for more than half of diet-related deaths.

In addition to lack of exercise and diet, modern people’s social interaction and sleep quality have also changed, which can promote chronic inflammation and insulin resistance, thereby increasing the risk of obesity, type II diabetes, CVD and all-cause death.

In addition, the modern working environment can cause constant psychological stress. In a bad working environment, the long-term increase of cortisol causes the body to decrease its sensitivity, destroys the ability of glucocorticoids to down-regulate inflammatory activities, and then leads to spinal cord injury and poor health.

Increasing exposure to blue light (especially looking at mobile phones at night) will increase night-time wakefulness and alertness, leading to circadian rhythm disorders, which in turn promote inflammation and increase the risk of various inflammation-related diseases. This may be the cause of obesity, type II diabetes and cardiovascular disease, as well as breast cancer, ovarian cancer, prostate cancer, colorectal cancer and pancreatic cancer.

In the past 200 years, the rapid development of urbanization has exposed humans to more and more external threats, including air pollutants, industrial hazardous wastes and industrial chemicals that promote chronic inflammation. Every year, about 2,000 new chemicals enter the items that individuals use or ingest daily, including food, personal care products, medicines, household cleaners, and vegetation protection products (see https://ntp.niehs.nih. gov ).

Smoking is also one of the external threats. As a major factor affecting health worldwide, it is also closely related to a variety of inflammation-related diseases. 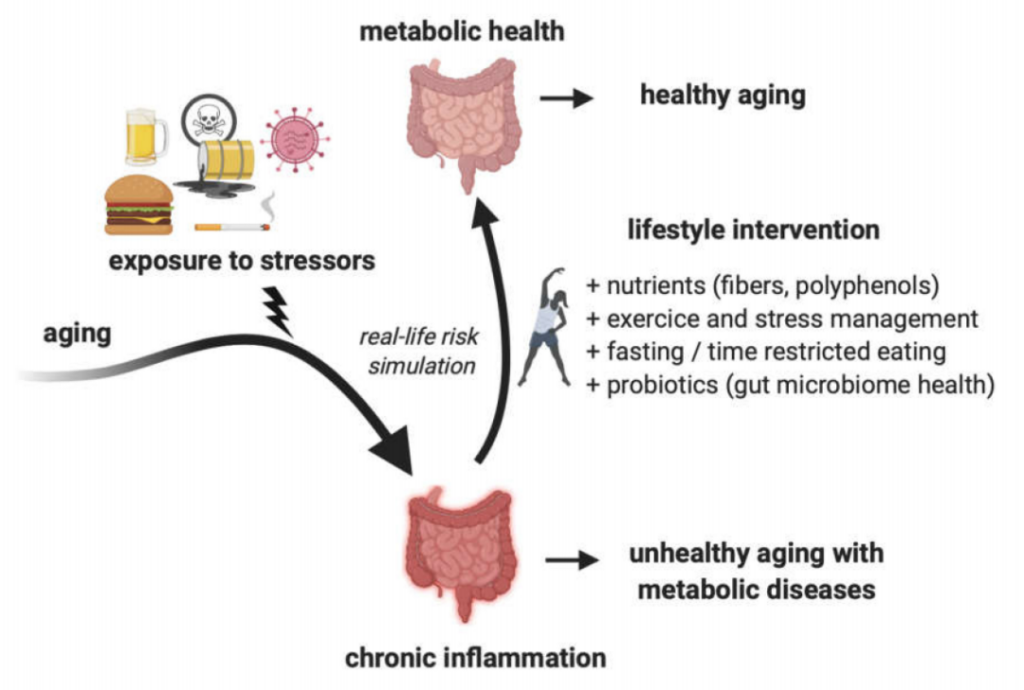