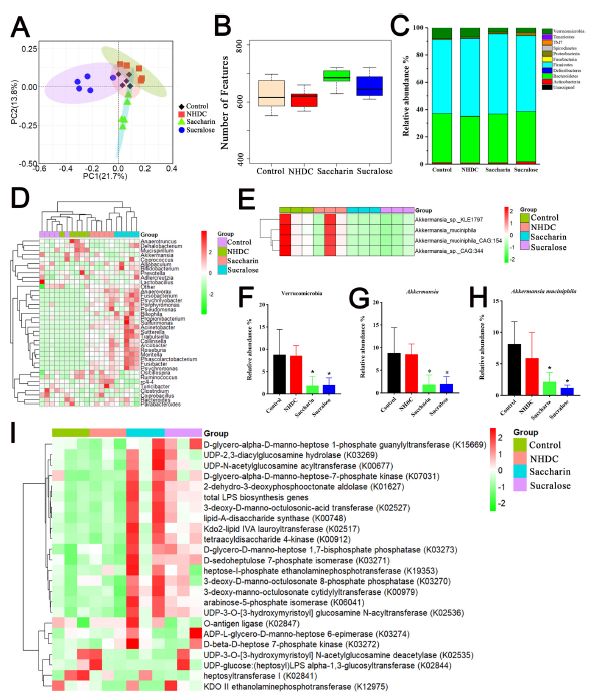 In the trend of pursuing weight loss and paying attention to health, sugar-free and fat-free beverages and foods such as Coca-Cola Zero and Genki Forest are very popular. This product added with artificial sweeteners (NAS) such as saccharin, sucralose, aspartame, etc., does not produce calories while still having the same sweetness as sucrose or even higher, and the intake of NAS has also been It is proven that it can pass through the human gastrointestinal tract without being absorbed, which is beneficial for fat loss. But does it have no other impact on our health? It is still unknown.

Recently, researchers from the Institute of Precision Measurement Science and Technology Innovation of the Chinese Academy of Sciences and Pennsylvania State University published a titled “Impaired Intestinal Akkermansia muciniphila and Aryl Hydrocarbon Receptor Ligands Contribute to Nonalcoholic Fatty Liver Disease in Mice” on mSystems. Research results have found that the intake of NAS will significantly reduce the abundance of Akkermansia in the intestinal flora of mice, and reduce the level of aryl hydrocarbon receptor (AHR) agonists, and promote the development of systemic inflammation and fatty liver. And another natural sweetener (neohesperidin dihydrochalcone) that has no obvious effect on health may be a substitute for NAS and sugar.

In order to test whether NAS would affect human health, the researchers fed mice neohesperidin dihydrochalcone (NHDC, a natural sweetener extracted from tangerines and tangerines), saccharin, and sucralose. The various indicators of his body were checked, and it was found that the continuous intake of saccharin and sucralose promoted the development of non-alcoholic fatty liver disease (NAFLD) in mice. The serum levels of liver function-related indicators alanine aminotransferase (ALT) Alkaline phosphatase (ALP) and liver triglycerides (TB) levels were significantly increased, and the levels of systemic inflammation and intestinal permeability and intestinal barrier function closely related markers also significantly increased.

Considering that NAS will come into contact with the intestines after ingestion, the researchers tested the influence of NAS on the composition of the intestinal flora through metagenomic sequencing. The results showed that saccharin and sucralose significantly changed the structure of the intestinal microbial community and the cecum of mice The levels of bacteria in the phylum Proteobacteria and Actinobacteria increased, while the abundance of the probiotic Akkermansia that maintains the intestinal mucosal barrier was significantly reduced, and the LPS biosynthesis of the pro-inflammatory flora also showed a significant increase. The intake of NHDC has no significant effect on intestinal microbes, which is no different from the control.

The researchers also conducted targeted analysis on the metabolites in the body of mice after ingesting NAS, and found that after ingesting saccharin and sucralose, the mice participated in various biological processes such as immune cell differentiation, intestinal function, and inflammation. The level of aryl hydrocarbon receptor (AhR) agonists was significantly reduced, especially the AhR agonist indoles derived from intestinal microbes. Correspondingly, AHR in the colon also showed significant depletion. Further analysis showed that the reduction of microbial source of AhR agonists was closely related to the reduction of Akkermansia abundance.

Clinically, the general use of metformin or fructooligosaccharide (FOS) can supplement Akkermansia and further improve NAFLD. Therefore, the researchers added metformin or FOS to the mice taking NAS and found that the abundance of Akkermansia in the mice was restored, and the number of goblet cells in the colon was also significantly increased. In addition, the colon of the mice The decrease in AHR activity and AHR protein level was also specifically restored. More importantly, the results of evaluating liver inflammation and steatosis in mice showed that serum ALT, ALP, TG and other liver function indicators of mice after metformin or FOS treatment were improved, and systemic inflammation was also significantly reduced. , The fatty acid level returned to normal, which greatly improved the occurrence of NAFLD induced by NAS.

In short, the study made it clear that NAS in sugar-free foods or beverages is not harmless to the human body, it promotes systemic inflammation and liver disease, and another natural sweetener, NHDC, has no obvious harm to the human body. May become a new type of sweetener alternative.