The lack of fiber in the Western diet promotes inflammation.

The transition of sub-Saharan Africans from a rural environment and a traditional plant-rich diet to an urban environment and a calorie-intensive westernized diet leads to a specific shift in serum metabolites and activates an elevated pro-inflammatory state in immune cells.

Based on this, the team of Professor Cathryn R Nagler published a comment entitled “Fiber-poor Western diets fuel inflammation” in the journal Nature Immunology, focusing on analyzing the phenotype of inflammation promoted by urbanization (detected by in vitro testing) and determined Dietary metabolites that may have a protective effect.

In recent decades, populations around the world have shown a dramatic shift to urban life, which is related to changes in the environment and lifestyle, including improved hygiene, increased antibiotic use, increased pollution and population density, reduced physical activity and significant changes in diet. All of these factors are related to the increasing incidence of non-communicable diseases (NCDs) worldwide, and diet is of particular interest.

In this issue of “Natural Immunology”, the research team studied the impact of a Westernized diet on individual immune status in Tanzanian cities, which is currently experiencing a rapid wave of urbanization.

The authors compared serum metabolomics, proteomics, and transcriptomics from a cohort of urban and rural residents. Their data shows that urbanization promotes the inflammatory phenotype (detected by in vitro testing) and identifies dietary metabolites that may have a protective effect.

In this report, the research team studied sub-Saharan Africa, where several low- and middle-income countries are undergoing major urban transformations, which may lead to a significant increase in non-communicable diseases reported in recent years. As the area shifts to urban life, the local diet has become more and more westernized because people have left behind traditional foods, such as ugali or banana beer, that are still easily consumed by the rural population. The research team believes that these foods may be the key to individual differences between urban and rural areas.

The authors examined the blood transcriptomes in Tanzania’s urban and rural areas and found significant differences between them, which highlights the up-regulation of several genes involved in the interferon (IFN)-α and IFN-γ inflammatory pathways in urban individuals. When stimulated in vitro with several agonists, whole blood from urban residents produced higher levels of the pro-inflammatory cytokines IFN-γ, TNF and interleukin (IL)-6.

In contrast, blood from rural residents has an increased amount of anti-inflammatory IL-104. The group further exposed isolated human monocytes to sera from urban and rural residents, and they demonstrated that sera from urban residents triggered these innate immune cells to produce higher levels of TNF 4 when they were re-stimulated in vitro.

This result validates the author’s statement and provides evidence that urbanization can encourage innate immune cells to maintain an enhanced pro-inflammatory state.

Finally, although most studies have focused on the role of microorganisms and their metabolites in preventing and triggering inflammation, it is important to pay attention to the contribution of non-microbial or “sterile” molecules directly obtained from the diet, such as ω -3 fatty acid and tryptophan metabolites. The omega-3 fatty acids found in plant and marine oils interact with the receptor GPR120 and have anti-inflammatory effects, and are believed to prevent chronic inflammatory diseases.

ryptophan metabolites bind to aromatic hydrocarbon receptors and receptors GPR35 and GPR109A to promote immune tolerance and intestinal homeostasis. The research team noted that a total of 348 metabolites are up-regulated in the rural plasma metabolome and may be involved in preventing inflammation. The most highly upregulated of these metabolites are food-derived flavonoids.

These polyphenol molecules found in many plants have many effects on the immune system, leading to several anti-inflammatory benefits. Using the aforementioned isolated human monocyte model, the research team was able to eliminate the onset of inflammation induced by the serum of urban residents by providing the most abundant flavonoids in the rural population of apigenin.

In summary, this research by the research team strengthens and expands the research team’s knowledge that urbanization and Westernized diet affect immune cells to exhibit pro-inflammatory phenotypes and increase the risk of noncommunicable diseases.

Although these authors focused on the shift to Western diets as a factor in driving this change, the other lifestyle changes mentioned earlier in this review also have a major impact on the immune system that cannot be ignored.

Closely related to all these changes is the gut microbiome, which was not examined in this study but plays a major role in immune regulation. The modular nature of the research group helps to justify the author’s attention to diet.

There are many articles studying the immunological effects of the microbiome and microbial-derived metabolites. The study provides a different perspective by identifying and directly testing diet-derived flavonoid metabolites.

Research investigating the immunomodulatory effects of diet and related metabolites can encourage the implementation of dietary intervention strategies in low- and middle-income countries to prevent the continuous increase of non-communicable diseases, and may help develop treatment methods in Western countries and this shift in diet Has been consolidated for generations. ( 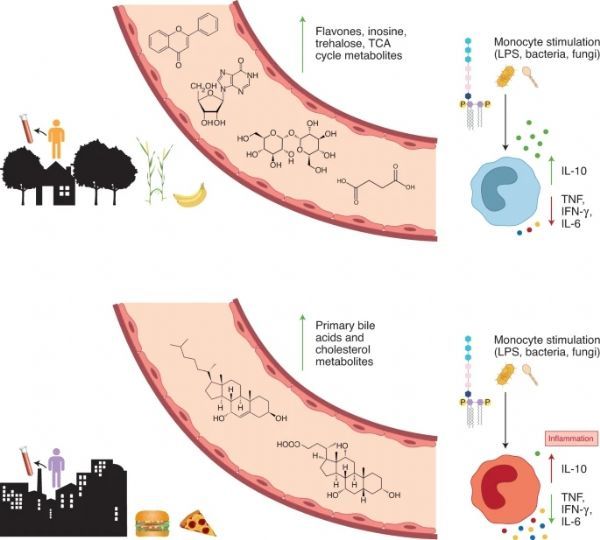 Differences in diet lead to changes in serum metabolites of urban and rural residents, which affects the degree of inflammation. doi.org/10.1038/s41590-021-00880-x