High-fat diet can cause inflammation and damage intestinal epithelial cells

High-fat diet can cause inflammation and damage intestinal epithelial cells.  How does obesity affect gut health? A new study takes you to reveal the answer!

Obesity has always been one of the hot topics discussed by people, and scientists are constantly exploring the pros and cons of obesity on health. Obesity is not only bad in some cases, on the contrary, it can inhibit the deterioration of some diseases; but in most cases, obesity still does more harm than good, and can easily lead to a variety of health problems. Recently, a group of scientists from Vanderbilt University in the United States has launched a study on how obesity affects the intestinal tract…

A study published in the journal Science on August 13 showed that a high-fat diet would destroy the biological properties of the intestinal lining and its microbial community, and promote the production of a metabolite that may cause heart disease. This research was published in an article titled “High-fat diet-induced colonocyte dysfunction escalates microbiota-derived trimethylamine N-oxide”. 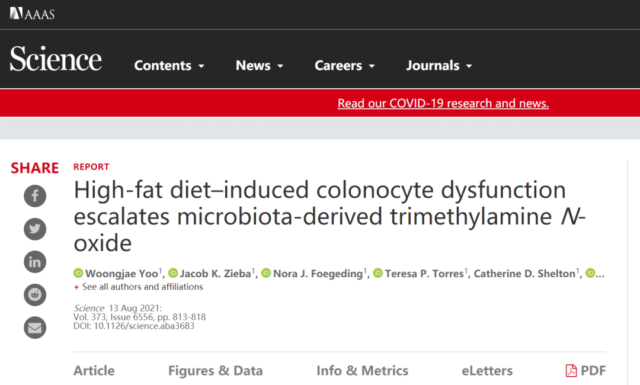 Mariana Byndloss, MD, assistant professor of pathology, microbiology and immunology at Vanderbilt University Medical Center, said: The discovery of animal models supports the key role of the gut and microbiota in the development of cardiovascular disease.

She pointed out that currently, there are relatively few scientists studying the effects of obesity on intestinal health.

Before the outbreak of the COVID-19 epidemic, obesity and metabolic syndrome were considered pandemics in the 21st century. Now, about 40% of Americans are obese, and this proportion is expected to rise. This Vanderbilt University study reveals a previously unexplored and undiscovered mechanism of how diet and obesity can increase the risk of cardiovascular disease by affecting the relationship between our gut and intestinal microbes. “

In previous studies, Dr. Byndloss and Andreas Bäumler of the University of California, Davis, found that intestinal mucosal cells and intestinal microbes have a mutually beneficial relationship, which promotes a healthy intestinal environment. They want to know whether diseases like obesity affect this relationship. In animal models, a high-fat diet can cause inflammation and damage intestinal epithelial cells. Byndloss explained: “A high-fat diet impairs the energy-producing function of mitochondria, causing intestinal cells to produce more oxygen and nitrate.”

These factors in turn stimulate the growth of harmful Enterobacteriaceae microorganisms, such as Escherichia coli, and promote the production of a metabolite called TMA (trimethylamine) by the bacteria. The liver converts TMA into TMAO (trimethylamine-n-oxide), which is related to promoting atherosclerosis and increasing the relative risk of all-cause death in patients.

Byndloss said: “It is well known that a high-fat diet can cause ecological disorders, that is, an imbalance of the microbiota will produce harmful substances, but we don’t know why or how this happens. We show that diet directly affects the host and A way to promote the growth of harmful microorganisms.”

The researchers proved that in animal models, a drug currently approved for the treatment of inflammatory bowel disease can restore the function of intestinal epithelial cells and inhibit the increase of trimethylamine oxide. This drug is called 5-aminosalicylic acid, which activates mitochondrial bioenergy in the intestinal epithelium. This shows that it is possible to prevent the negative consequences of a high-fat diet. Drugs like 5-aminosalicylic acid may be used in combination with probiotics to restore a healthy intestinal environment and increase the level of beneficial microorganisms.

This group of scientists explained: “Only by fully understanding the relationship between the host and the gut microbes during health and disease, can we design effective treatments to effectively control obesity and the adverse consequences (such as cardiovascular disease) caused by obesity.”

Byndloss and her team plan to extend their research to animal models of cardiovascular disease. They are also exploring the role of host-microbe relationships in the development of other diseases, including colorectal cancer.