The mechanism of action of the KRAS target

The mechanism of action of the KRAS target.

With the development of targeted drugs becoming the mainstream of the market, antibody drugs covering popular targets such as PD-1/PD-L1, VEGF, TNFα, HER2, EGFR, and CD20, many of which have been gradually overcome into medicines.

But in addition to this, there are still many targets that have not been overcome. For example, the KRAS target, which has been discovered for more than 60 years, has not yet been approved for marketing with the same target inhibitor, so it is also called “non-drugable target.”

However, as the AMG 510 (sotorasib) co-developed by BeiGene and Amgen is about to be approved for marketing, the history of KRAS targets that are not medicines is gradually being broken.

At the same time, the “latecomers” in the development of KRAS inhibitors have also received good news one after another, which has aroused strong concern.

The mechanism of action of the KRAS target

RAS is the first human oncogene to be discovered, and one-third of cancers have mutations in the RAS gene. The currently known RAS family has the “three brothers” of HRAS, KRAS and NRAS, which are located on chromosomes 11, 12, and 1, respectively.

Since MIT’s RobertA. Weinberg team discovered the HRAS gene in 1982, KRAS and NRAS have also been discovered. Among human tumors, KRAS mutations are the most common, accounting for about 85%, and NRAS and HRAS account for 12% and 3%, respectively.

According to public information, KRAS gene mutations occur in about 90% of pancreatic cancers, 36-40% of colon cancers, 27% of cholangiocarcinomas, and 17% of lung cancer patients (mostly non-small cell lung cancer NSCLC). 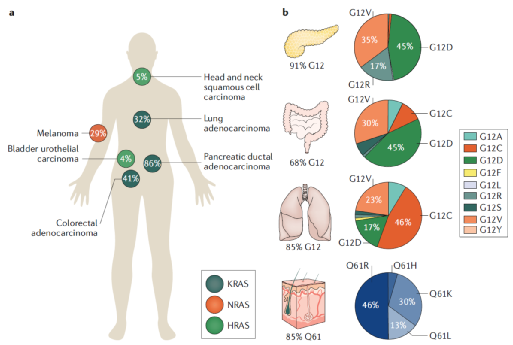 Proportion of KRAS mutations in different types of tumors

KRAS is the most common type of RAS mutation, and KRAS gene mutations have different subtypes, 97% of which occur at amino acid residues 12 or 13, including KRAS-G12C, KRAS-G12A, KRAS-G12D, KRAS-G12V And KRAS-G13 and so on. Among them, G12 has the highest mutation probability

According to public information, more than 100,000 people worldwide are newly diagnosed with KRAS G12C mutation cancer each year. At the same time, according to Guojin Securities, there are about 300,000 KRAS mutation patients in some countries in 2019, of which about 60,000 G12C mutation patients. At present, most of the small molecule inhibitors under research in the world are also for the KRAS G12C mutant, such as AMG 510, MRTX849, LY3499446 and so on. 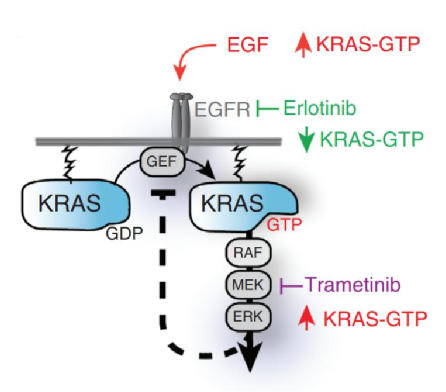 According to the research report of China International Financial Securities, K-Ras (Kirsten Rat Sarcoma Viral Proto-Oncogene; KRAS) belongs to the small GTPase family and is a GTP binding protein that can activate tyrosine kinase receptors to transmit cell signals.

Under normal circumstances, KRAS is like a switch, which can be switched freely in two states and combined with GDP/GTP respectively to determine whether the cell signaling pathway is activated or closed.

KRAS mutations will make it more likely to stay in the GTP-bound state, thereby continuously activating downstream targets such as RAF, MEK, and ERK, so that cells continue to proliferate, differentiate, and form tumors.

Therefore, most of the small-molecule inhibitors currently under research in the world are for the KRAS G12C mutant. Since there is the possibility of being a drug, it indicates that the history of the “unpreparable” KRAS target is about to be rewritten.

The KRAS target of “non-medicinal” will be overcome

At present, there are many KRAS target inhibitors in the world, including AMG 510 from Amgen/BeiGene, MRTX849 developed by Mirati Therapeutics Inc., BI 1701963 developed by Boehringer Ingelheim, etc. Indications Including colorectal cancer, NSCLC, pancreatic cancer, advanced solid tumors and many other tumors.

Among them, the fastest research and development progress is AMG 510, which has already applied for NDA in the United States and is expected to be approved for listing soon. In addition, BI 1701963 and MRTX849 are in clinical phase I and clinical phase I/II respectively.

AMG510 is a small molecule inhibitor jointly developed by Amgen and BeiGene in 2019. It specifically and irreversibly inhibits KRAS-G12C mutations by locking KRAS-G12C in an inactive GDP binding state.

According to the results of the AMG 510 phase II trial published by Amgen, the objective remission rate of patients using AMG 510 can reach 37.1%, the disease control rate reaches 80.6%, and the progression-free survival period is 6.8 months. 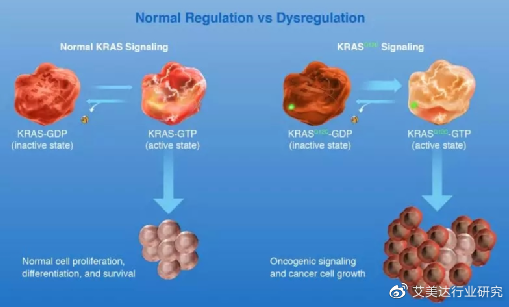 In December 2020, the US FDA granted AMG 510 Breakthrough Drug Qualification (BTD) and Real-time Oncology Review Qualification (RTOR). At the same time, Amgen submitted an application for AMG510 to the US FDA for the treatment of locally advanced or metastatic non-small cell lung cancer (NSCLC) patients with KRAS G12C mutations. These patients had previously received at least one systemic treatment.

On January 12, 2021, the State Food and Drug Administration included AMG 510 as a breakthrough therapy. The indication to be developed in China is the treatment of locally advanced or metastatic non-small cell lung cancer (NSCLC) patients with KRAS p.G12C mutation who have received at least one systemic treatment in the past.

MRTX849 is a specific and optimized oral inhibitor of KRAS-G12C mutant developed by Mirati Therapeutics. It binds irreversibly and covalently to KRAS-G12C and is highly selective.

At the 31st International Conference on Molecular Targets and Cancer Therapy held in October 2019, Mirati announced the results of the Phase 1/2 clinical trial of MRTX849-001, which is used in the treatment of non-small cell lung cancer (NSCLC) with mutations in the KRAS-G12C gene. ) And colorectal cancer (CRC) patients showed gratifying safety and anti-cancer activity. 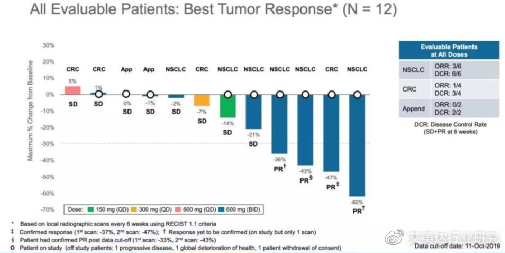 As mentioned above, among the many types of KRAS mutations, in addition to KRAS-G12C gene mutations that can promote tumor growth, there are also G12A, G12D, G12V, and G13.

BI 1701963, developed by Boehringer Ingelheim, is a pan-new oral KRAS inhibitor that can inhibit KRAS by binding to SOS1. The drug exchanges GDP bound to RAS for GTP, and SOS1 can help activate KRAS. Selective inhibition of SOS1 is a therapeutic concept, and KRAS blockade can be achieved regardless of the type of KRAS mutation.

According to preclinical research data, pan-KRAS inhibitors can inhibit the growth of a variety of G12 and G13 KRAS gene mutant tumors (the most commonly affected protein residues). In addition, this compound is selective for cancer cell lines with mutations in the KRAS gene.

Currently, BI 1701963 is in phase I clinical trials. At the same time, Boehringer Ingelheim has also launched the ChinaKey project to fully incorporate China into global early clinical development projects (phase I and phase II trials) in various therapeutic fields.

In addition to single-drug research, combination therapies such as KRAS target and SHP2 inhibitor or PD-1 monoclonal antibody, and the degradation of PROTAC into drugs, all promote the preparation of KRAS target drugs in multiple programs.

Take KRAS target and SHP2 inhibitor combination therapy as an example. The reason why the two can be combined therapy is mainly because the SHP2 target is located downstream of RTK such as EGFR and upstream of the KRAS target.

At present, MRTX849 and TNO155 are used in the treatment of patients with advanced solid tumors with KRAS-G12C mutation, and it is in phase I/II clinical trials.

At the same time, RMC-4630 developed by RevolutionMedicines is an oral SHP2 allosteric inhibitor, which has an inhibitory effect on SHP2-dependent RAS signal mutations, such as KRAS-G12C, NF1, BRAF, KRAS amplification and so on.

Cytological studies have shown that the combination of AMG 510 and SHP2 inhibitors has a good synergistic effect in the treatment of KRAS-G12C tumors, and the efficacy is better than other combinations.

In addition, the combination therapy of KRAS target PD-1 monoclonal antibody has also attracted much attention.

According to public information, experiments have found that the efficacy of AMG510 in completely eliminating tumors in animals depends on the presence of T cells in animals, which means that anti-PD-1 therapy that can further enhance the anti-tumor activity of T cells may have a synergistic effect with AMG510. PD1 and 510 have complementary anti-cancer mechanisms, and Amgen will also initiate clinical trials of AMG510 combined with PD1.

On the other hand, due to the PROTAC technology, which is known as “the artifact of cracking non-drugable targets”, it can degrade difficult-to-drug proteins that lack enzymatic activity or lack drug-forming sites on the surface, and successfully overcome the “non-drugable” characteristics of KRAS targets.

On April 10, 2020, the founder of Arvinas, CREW and his team developed the PROTAC molecule LC-2 that degrades KRAS-G12C mutants, which can quickly degrade KRAS-G12C in different homozygous and heterozygous tumor cells, and it will be opened soon. Clinical trial exploration.

There are fewer KRAS drug pipelines under development in China, and progress of Baekje and Betta can be expected

At present, there are relatively few companies that are developing KRAS-related drugs in China. The ones with the advanced research and development progress are BeiGene’s AMG 510, Betta Pharmaceuticals’ BPI-421286, and Gacus.

As mentioned in the previous article, BeiGene and Amgen have collaborated on the research and development of AMG 510, which is currently in the listing approval stage and is expected to be approved for listing soon.

BPI-421286 capsules (a new type of potent and highly selective covalent irreversible KRAS-G12C oral small molecule inhibitor) developed by Betta Pharmaceuticals, approved for clinical use by the National Food and Drug Administration on April 6, 2021. It is planned to be used For the treatment of patients with unresectable, locally advanced or metastatic solid tumors with KRAS-G12C mutations. 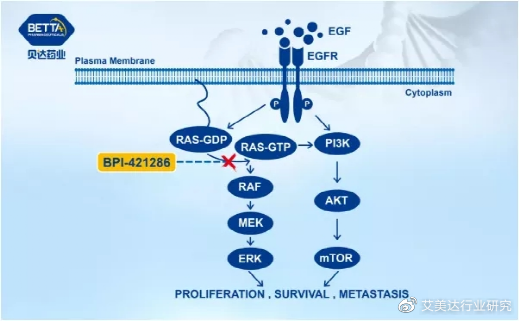 In addition, GACOS currently has three KRAS inhibitor projects, JAB-21000, JAB-22000 and JAB-23000, which are used to inhibit KRAS with G12C, G12D and G12V mutations, respectively. These drugs will be initially developed for the treatment of pancreatic cancer, CRC and NSCLC.

In general, patients with tumors with KRAS mutations still lack effective treatment options, there are huge unmet clinical needs, and development prospects are very promising. Because of this, with the increasing number of KRAS target drug research and development pipelines, the KRAS target that was once called “unable to drug” is now gradually being overcome.

From the perspective of research and development progress, the AMG 510 jointly developed by BeiGene and Amgen will become the first KRAS “magic drug”, followed by Mirati, Boehringer Ingelheim and Johnson & Johnson.