In September last year, the results of a Phase 1 clinical trial published in the New England Journal of Medicine (NEJM) aroused the enthusiastic attention of people in the industry. The reason is that this study is aimed at a target that was previously considered unavailable as a drug— -KRAS.

As we all know, the development of targeted cancer therapy in recent years has been changing rapidly, and new targets have been discovered constantly, and new targets mean the possibility of new drugs. The difference of KRAS is that it is not a new target, but a very old target, so old that it appears in most medical textbooks and becomes an exam question for medical students.

Like many oncogenes, mutations in KRAS can cause cells to become cancerous and continue to proliferate. KRAS mutations are the most common cancer driver genes and are related to many common cancers including lung cancer, colorectal cancer, pancreatic cancer, and leukemia. Among them, one-quarter of lung cancer patients and one-third to half of colorectal cancer patients carry KRAS. mutation. 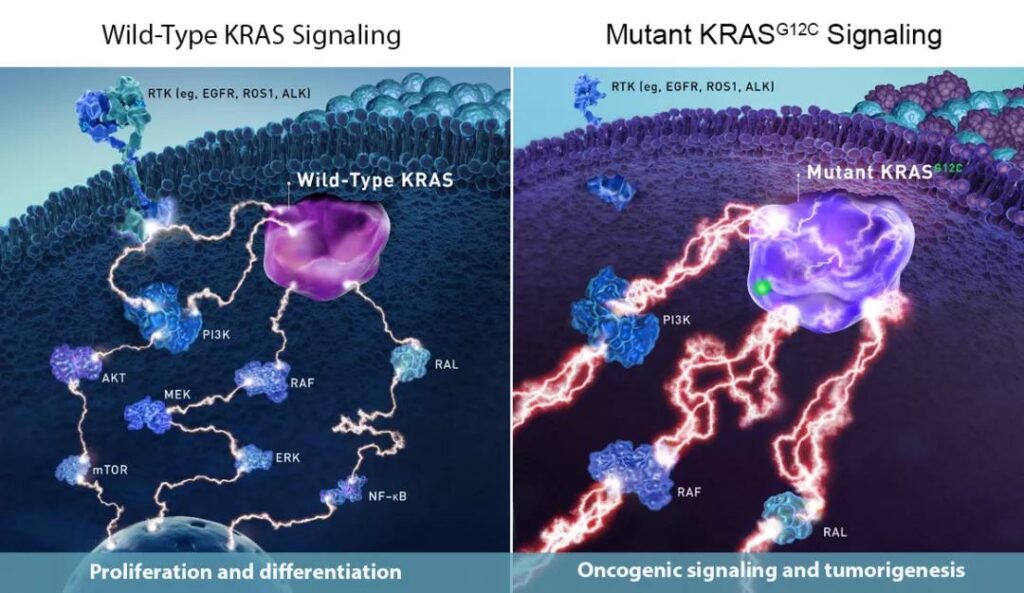 Such “old” and common targets have not been targeted drugs for nearly 40 years. Although there are no targeted drugs, the FDA approved several KRAS mutation tests for colorectal cancer patients in 2012. Why do you want to test if there is no medicine? This is because, unlike other oncogene testing purposes, testing for KRAS mutations is not to predict who will get better results, but to predict who will have worse therapeutic effects.

Why KRAS can only act as a “bad guy checker”, but there has been no suitable targeted therapy? According to the corresponding author of the NEJM paper, Dr. Bob Li (Li Tingkan), an expert on thoracic tumors and new drug development at the Memorial Sloan Kettering Cancer Center (MSK Sloan) in the United States, this is related to the structure of the KRAS protein, a KRAS gene product: “Most proteins It has a blocky, irregular shape with many cracks and pockets into which drugs can be wedged. When this happens, the drug can act as a key to lock the protein and shut down its activity. In contrast, the KRAS protein It’s very smooth, no cracks and pockets are found. Therefore, if you can’t find a keyhole, you can’t make a key.” So KRAS was once considered incompatible. 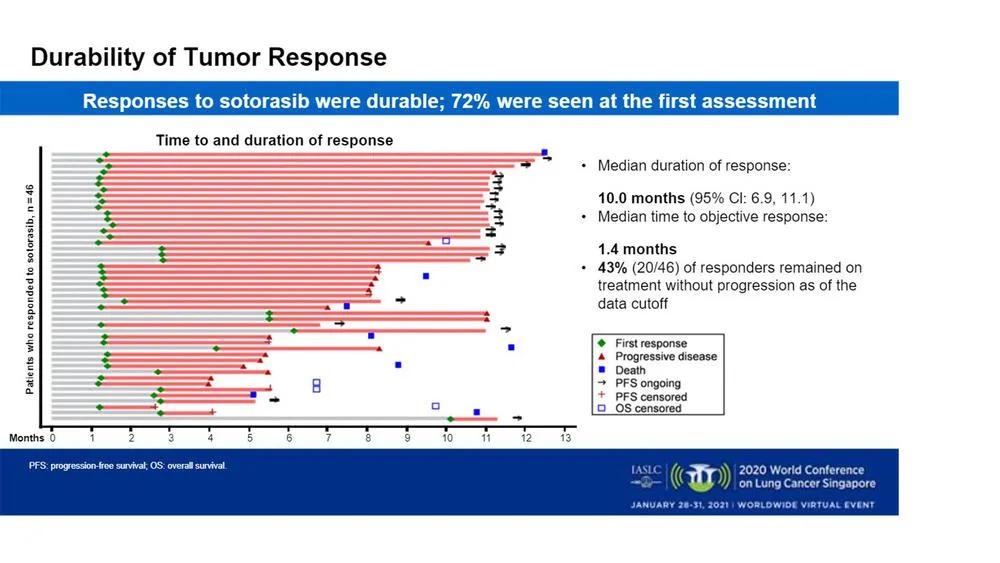 Bob Li’s report was published in the chairman’s seminar of the World Lung Cancer Conference. At the meeting, he was pleased to announce that the drug had obtained the Breakthrough Therapy Mark from the U.S. Food and Drug Administration (FDA). The bureau submitted regulatory documents, and the Phase 3 clinical trial “CodeBreak 200” has also begun to recruit patients.

According to the results of the registered Phase II CodeBreaK 100 trial, sotorasib, the first of its kind KRAS G12C inhibitor, showed an early, deep and long-lasting response in the treatment of advanced NSCLC with KRAS G12C mutations.

In the Phase I CodeBreaK 100 trial, Sotoracide showed durable clinical benefits in a cohort of 59 NSCLC patients who had received multiple treatments. The objective response was 32.2%, and the median response time was 10.9 months. The median progression-free survival was 6.3 months.

The phase II trial included 126 patients with locally advanced or metastatic NSCLC with KRAS G12C mutations. These patients continued to progress after using 3 standard therapies; 81% of the included patients had previously used platinum-based chemotherapy and PD-L1 inhibitors. The primary endpoint is the overall response rate assessed by an independent central review.

The dose of sotoracide is 960 mg once a day until the disease progresses.

Bob Li said that of the 126 patients included, two patients had no measurable lesions at the time of enrollment and were excluded from the response assessment according to the central radiological review. Among the remaining 124 patients, the overall response rate (ORR) was 37.1%, including 3 patients with complete responses and 43 patients with partial responses. The disease control rate was 80.6%.

72% of patients had an early and rapid response at the first CT scan at 6 weeks.

The median progression-free survival was 6.8 months, which was consistent with the previous phase I results.

According to Bob Li, sotoracib is well tolerated, there is no death due to treatment, and the incidence of treatment-related grade 3 or 4 adverse events, treatment discontinuation and dose adjustment is very low.

Treatment-related adverse events are generally mild and can be controlled; most of them are grade 1 or 2. There was a grade 4 toxicity event, and the patient reported dyspnea and pneumonia.

Treatment-related adverse events caused about one-fifth (22.2%) of patients to adjust the dose, and 7.1% of patients stopped treatment.

The results of CodeBreak 100 aroused an enthusiastic response from the participants. Dr. Pasi A. Jänne of the Dana Farber Cancer Institute congratulated the researchers when commenting on this study and announced that the KRAS G12C inhibitor has finally appeared.

To illustrate the importance of these findings, Dr. Jänne pointed out that half of the patients with KRAS mutations have KRAS G12C mutations, and the number of patients in this subset is more than the sum of ALK, ROS1, RET, and TRK 1/2/3 mutations. .