Recently, the academic feast in the field of lung cancer-the 21st World Conference on Lung Cancer (WCLC) came to an end. Although the conference was postponed by the epidemic for 5 months, there are still many major research results, which are worthy of attention by lung cancer patients.

Lung cancer is the world’s largest cancer and the leading cause of cancer death. Of the 2 million confirmed patients worldwide each year, only 300,000 survive. Non-small cell lung cancer (NSCLC) is the most common lung cancer, accounting for about 80%-85%. The main subtypes are adenocarcinoma, squamous cell carcinoma and large cell carcinoma. 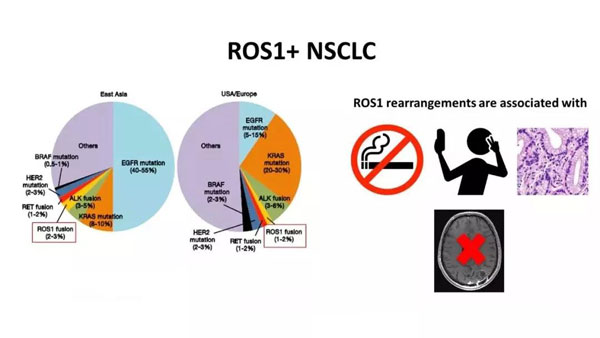 ▌Remission rate is 93%! Repotrectinib is expected to be effective in treating ROS1+ lung cancer

The early and mid-term trial data of 11 patients enrolled in the phase 1 clinical trial showed that the overall objective response rate (ORR) was 91%, the median duration of response was close to 2 years (23.1 months), and the median progression-free survival was over 2 years .

The phase 2 trial (EXP-1) enrolled 55 patients with advanced NSCLC who were newly treated with ROS1+ and TKI. After treatment, it was found that tumor shrinkage was observed in all patients treated with Repotrectinib.

As of the end of last year, 15 evaluable patients had an ORR of 93%, and one of them achieved complete remission. Currently, the patient is still receiving treatment. Safety and well tolerability were observed in all trials.

This indicates that Repotrectinib is expected to be the best treatment option for ROS1-positive TKI patients with advanced non-small cell lung cancer.

Dr. Michael Castro, an oncologist at the Beverly Hills Cancer Center in the United States (Michael Castro, MD, has been awarded the “Top Doctors in America” ​​for many years), introduced:

KRAS is a common oncogene. Its abnormal activation can lead to cancer cell growth, cell apoptosis blockade, immune escape, metabolic changes, treatment failure, etc. It is currently the “most difficult target” in the treatment of lung cancer.

Sotorasib (AMG 510) is an inhibitor that targets KRAS G12C and can be used to treat patients with locally advanced or metastatic NSCLC with KRAS G12C mutations. Previously, the FDA also granted the drug a “breakthrough therapy” designation.

The Phase II trial called CodeBreaK 100 enrolled 126 patients with advanced NSCLC with KRAS G12C mutations. About 81% of the patients were treated with platinum-based chemotherapy and PD-1 inhibitors and the disease still progressed.

The median follow-up time was over one year (12.2 months), the results showed:

The objective response rate (ORR) of the Sotorasib treatment group was 37.1%, and the disease control rate was 80.6%. Including 3 cases of complete remission and 43 cases of partial remission.

Sotorasib has produced a rapid, deep and long-lasting response in this trial, and is expected to become the first targeted drug approved for the treatment of KRAS gene mutations, bringing new treatment options to the majority of lung cancer patients.

At the 2020 World Conference on Lung Cancer, the MET inhibitor Tepotinib (Tepmetko) showed long-lasting clinical activity in patients with advanced or recurrent NSCLC with skipping mutations in MET exon 14 (METex14).

Changes in the MET signaling pathway occur in 3-5% of NSCLC patients. When a MET14 exon skipping mutation occurs, MET is continuously activated, and precise treatment of this mutation is needed to improve survival.

Tepotinib is a highly selective oral MET inhibitor, showing anti-tumor activity in NSCLC patients with overexpression or amplification of MET.

In the phase 2 clinical trial called VISION, as of July 1, 2020, researchers have evaluated the efficacy of 152 patients (cohort A) and evaluated the safety of 255 patients.

The follow-up time was ≥9 months. In cohort A, the overall objective response rate (ORR) of newly treated patients was 44.9%, and the median duration of response (DOR) was 10.8 months. The progression-free survival (PFS) was 8.5 months.

The ORR of the treated patients was 44.6%, the median DOR was 11.1 months, and the median PFS was 10.9 months. Tepotinib is generally well tolerated.

In August 2020, the FDA granted priority review to Tepotinib. However, Tepotinib was approved in Japan as early as March last year. I hope to hear more good news this year, which will bring new dawn for precision treatment for patients with this type of non-small cell lung cancer. In addition, experts learned that many antibody-conjugated drugs have also achieved gratifying results at the 2020 World Lung Cancer Conference. For example, the antibody conjugate DS-1062 targeting Trop2 has achieved a high disease control rate in the treatment of advanced NSCLC, and the efficacy has been maintained for more than half a year.

The EGFR/MET bispecific antibody Amivantamab is effective in the treatment of EGFR exon 20 insertion mutations and metastatic NSCLC patients whose disease is still progressing after receiving platinum-containing chemotherapy, achieving an objective remission rate of 40% and a disease control rate of 74%.

We look forward to the appearance of more new therapies, which can improve the diagnosis and treatment of lung cancer patients around the world and bring innovative therapies to patients with limited treatment options.

Although there are many innovative therapies for lung cancer in the world, cancer patients should not rashly try some new drugs and new therapies that have not yet been marketed in China. They should still follow the doctor’s advice.