How to treat lung cancer after brain metastasis?

How to treat lung cancer after brain metastasis? 3 new anti-cancer drugs are coming!

However, if a brain metastasis occurs, and active symptomatic treatment, you can also get the chance of long-term survival!

Lung cancer is more prone to brain metastasis, because the lung is an organ with particularly rich blood vessels. Once a tumor develops, cancer cells are likely to spread throughout the body with the bloodstream, and the brain is a high-incidence site of lung cancer that is more likely to metastasize.

There are many cases of lung cancer brain metastasis, and different treatment plans need to be formulated according to the condition. Many patients are diagnosed with lung cancer in the hospital, but after careful examination, it will happen that a small metastasis may have occurred in the brain without any symptoms, especially single brain metastases. Such patients need to be actively treated . For example, radiotherapy or stereotactic radiotherapy to the lesions and control of metastases and primary tumors can significantly prolong life. There are also some patients who have a very satisfactory long-term survival chance after active treatment.

If the patient’s brain metastases are relatively large and have some symptoms, if the metastases can be controlled, they still need to be actively treated. While controlling the primary lesions, the metastases can be surgically removed, followed by radiotherapy, chemotherapy, and postoperative treatment. Targeted therapy can control the condition for a long time, and patients can still achieve long-term survival results.

Today, the editor of Cancer Free Home is going to introduce 3 anti-cancer drugs that quickly spread to the circle of cancer friends because of their powerful brain-influencing activity!

Clinical data shows that the response rate of pediatric tumor types carrying neurotrophic tyrosine receptor kinase (NTRK), ROS1 or anaplastic lymphoma kinase (ALK) fusion to treatment is as high as 100% (complete remission and partial remission)! Including intractable tumors in the central nervous system! This number is unprecedented, and it is believed to open a new door of hope for childhood cancer patients.

1) Among patients with NTRK fusion-positive solid tumors, the objective response rate ORR (tumor reduction) of entrectinib (entrectinib, RXDX-101) was 57.4%, and objective responses were observed across 10 different types of tumors (The tumor shrinks). Among patients with brain metastases, the ORR of entrectinib’s objective intracranial response rate was 54.5%, of which more than 1/4 achieved complete remission (all lesions disappeared).

The latest Asian data released: the remission rate of intracranial lesions is as high as 100%!

At the ESMO Asia Conference in 2020, researchers recently disclosed the results of data analysis of the efficacy of Entritinib in the treatment of Asian patients, including China, confirming that Entritinib has achieved more exciting and positive results for Asian patients.

These patients are patients with NTRK and ROS1 positive advanced metastatic non-small cell lung cancer or other solid tumors, with or without baseline brain metastases.

Among them, the overall remission rate of patients with brain metastases at baseline was 75.0% (3/4), and the remission rate of intracranial lesions was 100% (3/3), which means that all the lesions in the furnace were reduced. 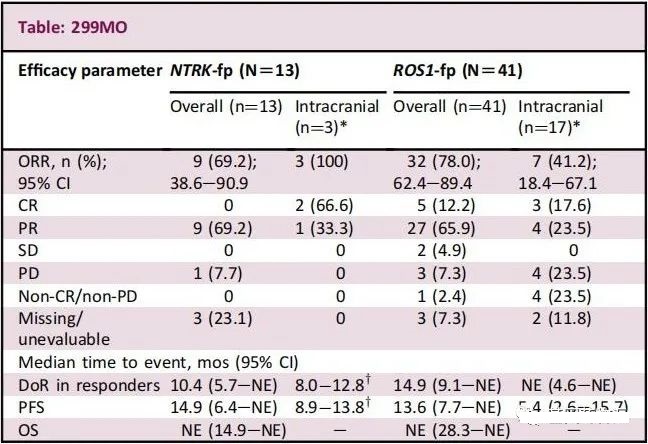 Therefore, the results of this study confirm that the legendary anticancer drug Entratinib is equally effective for Asian patients.

At the annual meeting of the American Society of Clinical Oncology (ASCO) held in June 2019, the data of a new drug Repotrectinib (repotinib, TPX-0005) that scans the ALK/ROS1/NTRK three targets surprised four.

Repotrectinib is a new generation of oral multi-targeted drug developed by Turning Point Therapeutics of the United States. It has inhibitory effects on ALK, ROS1 and NTRK, and can overcome a variety of gene mutations that are resistant to other TKIs and kill ROS1. , NTRK and ALK positive solid tumors.

At the 2019 ASCO conference, researchers published the latest data on the efficacy of other ROS1 inhibitors (TKI) and Repotrectinib in the treatment of ROS1-positive non-small cell lung cancer patients.

The overall remission rate of 11 evaluable ROS1-positive NSCLC patients was 82%. What is exciting is that the intracranial response rate is 100%, and the clinical benefit rate is 100%, surpassing all current targeted drugs.

It is expected to become a new generation of broad-spectrum anti-cancer star beyond the star products Larotrectinib (LOXO-101) and Entrectinib (RXDX-101). 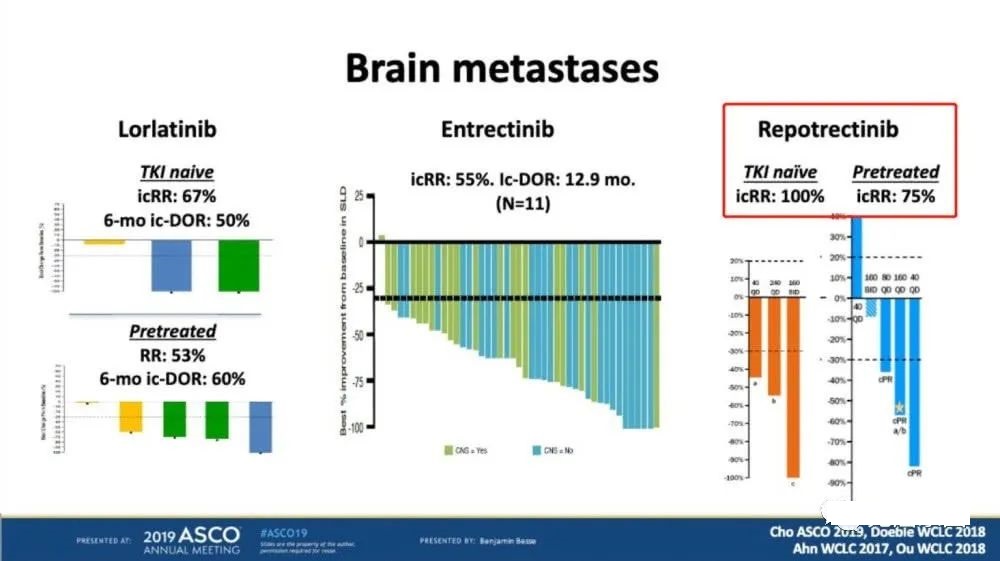 The following table compares the efficacy of crizotinib, ceritinib, entricinib, lauratinib, and repotrectinib in the first-line treatment of ROS1+ patients in detail. The PFS and OS of Repotrectinib have not yet reached, and in other aspects, they are all It is better than several other ROS1 inhibitors.

Taletrectinib (DS-6051b, domestic code AB-106) is an innovative drug developed by Japan’s Daiichi Sankyo Co., Ltd., and introduced into some countries by Baoyuan Biotechnology, and began phase II clinical trials. In the previous phase I clinical trials conducted by the US and Japan centers, AB-106 has shown good potential.

The results of the Japan Center study were published on Oncotarget in May 2018. Among the 3 evaluable crizotinib-resistant patients, 1 achieved partial remission, 2 patients had stable disease, and the overall remission rate was 33.3%; 9 cases Among non-crizotinib-resistant patients, 1 case achieved complete remission and 5 cases achieved partial remission. The overall remission rate was 66.7%, and the disease control rate was 100%. A total of 5 patients with brain metastases were included in the study, and one patient had a clinical complete remission of intracranial lesions.

At present, the Chinese central clinical trial of AB-106 for the treatment of NTRK1, NTRK2, and NTRK3 fusion mutation-positive solid tumors has also started.

The editor here needs to remind all cancer friends that these 3 drugs target specific mutation types NTRK fusion or ROS1 fusion respectively. The study found that as many as 36% of patients with ROS1 fusion-positive NSCLC patients will develop brain when diagnosed with advanced disease Transfer.