Differential diagnoses of endometrioid carcinoma of the ovary

Based on the superficial understanding of ovarian serous tumors and mucinous tumors, we may take it for granted that the order of occurrence of ovarian endometrioid tumors is: from cystadenoma/adenofibroma, borderline tumor to endometrial Like cancer. But in fact, this is not the case. The book says: “Most ovarian endometriotic cysts have monoclonal lesions themselves, and contain multiple molecular changes, so they may be neoplastic lesions.” 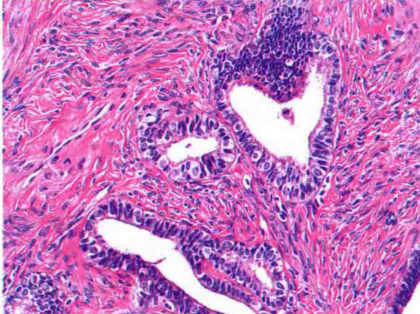 The concept of endometrioid borderline tumor

When benign endometrioid tumors have a series of different degrees of epithelial hyperplasia, cell crowding and cell atypia, they are called endometrioid borderline tumors, and their incidence is very low, only 0.2%.

This atypia is generally a mild atypia of the epithelium slightly beyond the morphology of benign endometrial adenofibroma, mild gland congestion and mild epithelial stratification. When there is epithelial hyperplasia and fusion into a piece, lack of mesenchyme, similar to endometrial atypical hyperplasia and well-differentiated endometrial adenocarcinoma, when there are one or more such areas, and each lesion does not exceed 5mm At times, it is often considered to be accompanied by microinvasive/intraepithelial carcinoma.

There is also a special morphological change: scaling. This special form has a special name called: mulberry-like change. Regardless of whether it is of ovarian origin, mulberry-like changes will always indicate that the tumor is endometrial-like. After all, in the context of similar adenoid structures, it is actually difficult to distinguish whether it is adenocarcinoma or endometrioid carcinoma, but the appearance of “mulberry-like” appearance will be a way of thinking about the source of “endometrioid” (serous mucus). The tumor will also appear scaly). The following picture shows the background of endometrioid borderline tumors and “mulberry-like” scaly: 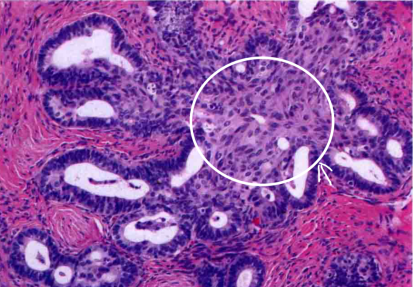 The concept of endometrioid carcinoma of the ovary

Most ovarian endometrioid tumors are cancers, and most of them are well differentiated. 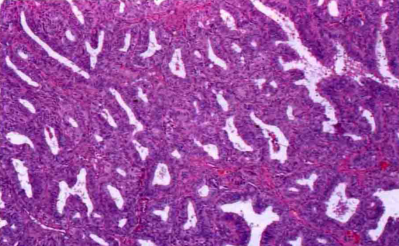 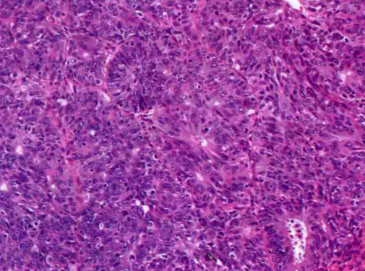 Endometrioid carcinoma has a subtype, which is characterized by: small tubular glands, lined with cubic or low columnar epithelium, and the cells are arranged in double layers. Because they are similar to the highly differentiated Sertoli-Leydig cell tumors, they are called: sertoli-like uterus Endometrioid carcinoma, as shown below: 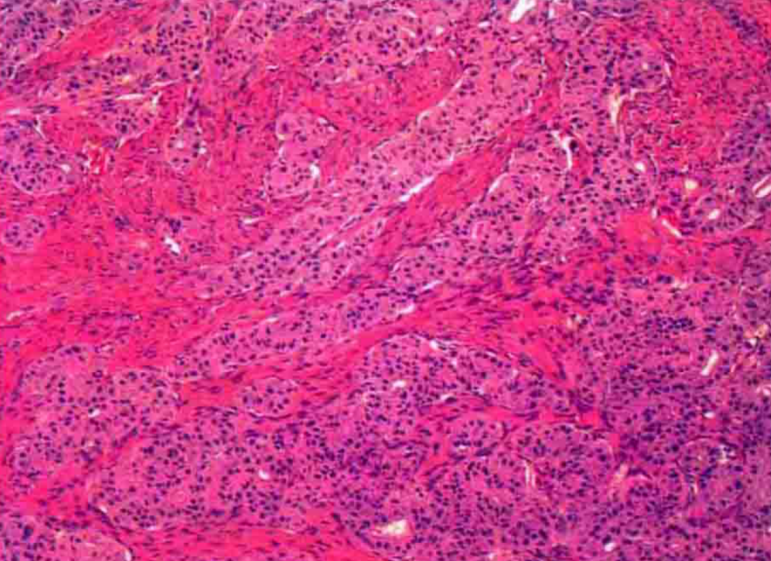 First of all, let’s think about a question. What is the prerequisite for distinguishing between diseases?

2) From the perspective of the pathologist, the similarity of microscopic morphology is also an important factor that needs to be differentiated between different tumors.

Based on the above two reasons, the tumors that need to be differentiated from endometrioid carcinoma are: metastatic adenocarcinoma, especially colon cancer and sertoli-Leydig cell tumor.

b) Microscopic histological features: “garland”-like structure, that is, the cyst cavity is lined with malignant high columnar cells, the epithelium forms a sieve-like structure, and a lot of dirty necrosis is seen in the sieve.

c) Immunohistochemistry: Colon cancer is negative for CK7 and strongly positive for CK20, which is the opposite of endometrioid carcinoma of the ovary.

a) General characteristics: The average age of sex cord-stromal tumors is 25 years old, while endometrioid carcinoma is more common in perimenopausal women; Sertoli-Leydig cell tumors are often accompanied by virilization and other hormones in clinical symptoms Related symptoms are generally absent in endometrioid cancer.

Finally, let’s talk about other key points of identification:

The first thing to say is that the key points for identifying endometrial cancer invading the ovary are actually the same as those for metastatic adenocarcinoma. Generally, they invade the surface and mostly occur on both sides.

The second is to differentiate from tumors of other origins in the ovary. The main points are as follows:

1) It needs to be combined with the clinic. From the age of the patient to the symptoms to the previous medical history, these are all factors that we need to consider.

2) Looking at the general specimen, whether it is unilateral or bilateral, and the texture of the cut surface, etc., during the process of sampling, it will also provide diagnostic ideas for our diagnosis.

Only by combining all the above information, the summary of the diagnosis is reliable.