First Kras mutation targeted drug:Sotorasib (AMG 510) will be launched soon. In the past 10 years, cancer genome sequencing has made unprecedented breakthroughs.

However, as one of the most notorious oncogenes in human cancer, the KRAS gene, researchers have identified KRAS as an important therapeutic target for cancer decades ago, but unfortunately since the discovery of this target so far In the past 30 years, no targeted drug that directly targets KRAS mutations has been approved. Therefore, people have always believed that KRAS is an “indestructible” protein.

Finally, FDA has already been familiar with the revolutionary new drug Sotorasib (you may be familiar with its code name, this is the famous name. AMG 510) has undergone a priority review for the treatment of locally advanced or metastatic non-small cell lung cancer (NSCLC) patients with KRAS G12C mutations who have undergone at least one systemic treatment. This is 4 months earlier than the standard review cycle, and it is expected that the FDA will make a final decision before August 16, 2021!

This means that if all goes well, Sotorasib, the first targeted drug for KRAS, will be launched in the third quarter of 2021! KRAS will finally be taken down, and countless cancer patients with KRAS mutations will welcome them. Come to survive new hope! 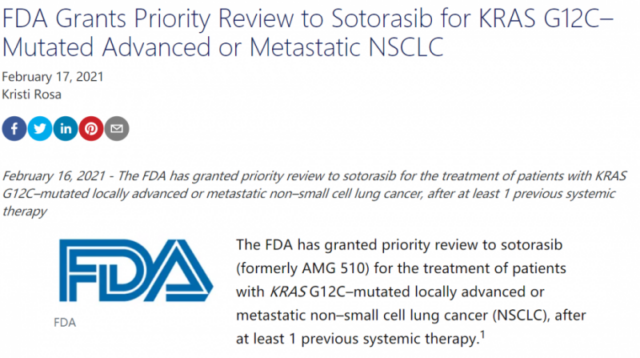 Before officially introducing the drug, let’s get to know the specific target of this drug treatment-KRAS.

Note: Patients who have undergone genetic testing can take out a report to see if there is a KRAS mutation, they can immediately contact the Medical Department of Global Oncologist Network (4006667998) to see if they have the opportunity to receive new drug treatment. Patients who do not understand can also call Global Oncologists Interpretation report of the Department of Net Medicine.

The discovery of RAS family genes is a key milestone in cancer research! Mutations in the RAS gene can cause a permanent “on” switch, which in turn leads to uncontrolled malignant proliferation and division of cells, leading to cancer. There are three types of this family, called NRAS, GRAS and KRAS. Although these three mutations can cause cancer, KRAS is the most common oncogene, present in 90% of pancreatic cancers, 30-40% of colon cancers, and 15-20% of lung cancers (mostly non-small cell Lung cancer).

In recent years, researchers have discovered that KRAS G12C is a specific KRAS submutation, where the glycine of the 12th codon is replaced by cysteine, accounting for about 44% of all KRAS mutations, of which non-small cell lung cancer adenocarcinoma The most common is 14%, followed by colorectal adenocarcinoma, which accounts for 3 to 4%, and pancreatic cancer, which accounts for 2%. More than 100,000 people worldwide are diagnosed with KRAS G12C mutations each year. 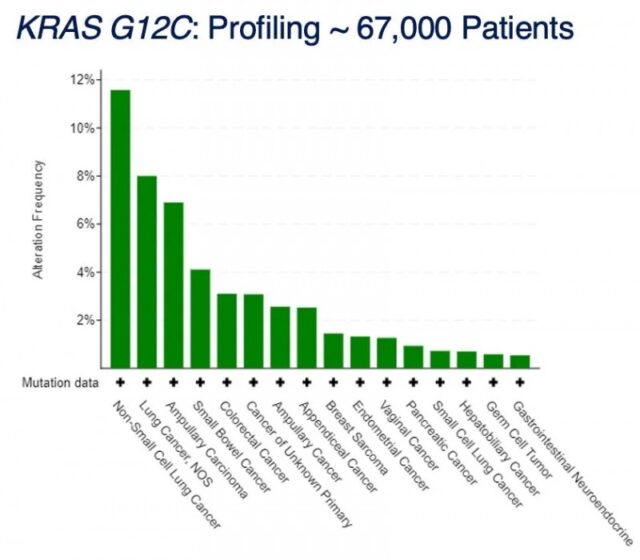 In the past, once chemotherapy or immunotherapy for KRAS G12C patients failed, there was no targeted treatment option available at all, and the prognosis was extremely poor! Recently, for this specific mutation type, the dawn has finally come!

The disease control rate is 80.6%! Sotorasib, the first revolutionary new drug to challenge KRAS, will be launched soon

AMG510 is specifically aimed at the mutant subtype of KRAS G12C. It has high selectivity. It can specifically bind to KRAS G12C among more than 6,000 proteins, lock and inactivate it.

AMG510 quickly became popular in the oncology community and patient circles as soon as it came out. It was published in top journals such as Nuture, and was published at ASCO and AACR oncology conferences. It made breakthrough achievements and made mouse tumors disappear and lung cancer patients. The tumor has shrunk, and no dose-limiting toxicity has been found in clinical studies so far. 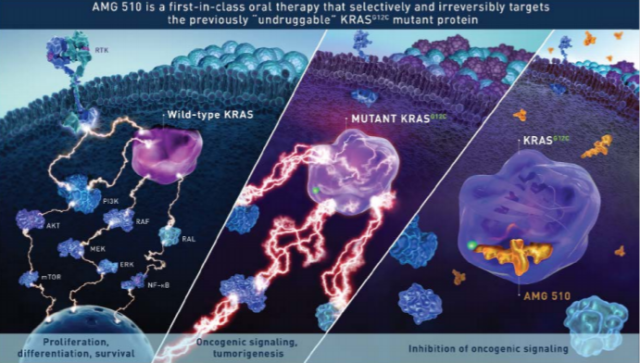 On December 8, 2020, the FDA granted Sotorasib (Sottolamab, AMG510) the title of breakthrough therapy for the treatment of locally advanced or metastatic non-small cell lung cancer with KRAS G12C mutation.

Only two months later, we ushered in the great news that AMG510 will be launched soon. This is undoubtedly the first big gift given to patients in the Year of the Ox.

The FDA’s priority approval is based on data from the key Phase 2 clinical trial of CodeBreaK 100 (NCT03600883) for AMG510. Let’s take a look at the exciting latest data released by this drug at the Lung Cancer Conference.

This trial enrolled 124 patients with advanced non-small cell lung cancer with KRASG12C mutations. These patients have received more than one type of chemotherapy or immunotherapy after the disease has progressed, and are clinically very difficult to treat extremely advanced patients, receiving AMG510 treatment.

The results showed that the objective response rate (ORR) was 37.1%, including 3 cases of complete remission and 43 cases of partial remission, and the disease control rate was 80.6%. The median duration of response was 10 months.

AMG510 is very well tolerated. The main adverse reactions are loss of appetite, diarrhea, fatigue, headache, cough, hot flashes and nausea. No dose-limiting toxicity and drug-related adverse reactions above grade 4 have been found. 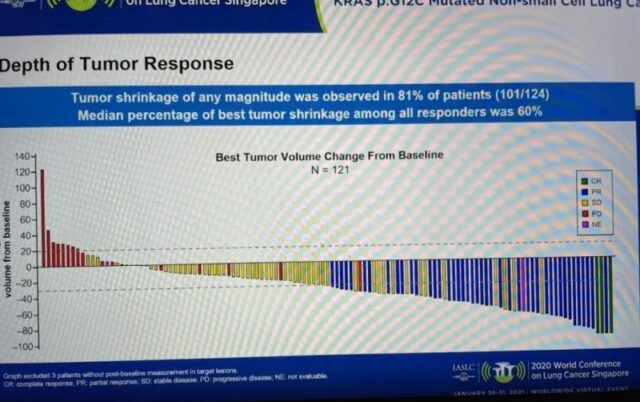 A 55-year-old male NSCLC patient tried almost all the treatment options in the past, (including chemotherapy, erlotinib, PD1, dasatinib, M3541) all ended in failure, and then used AMG510 (360mg), the tumor was reduced by 67% , And achieved complete remission at 18 weeks of medication, and the lesions have subsided to no measure 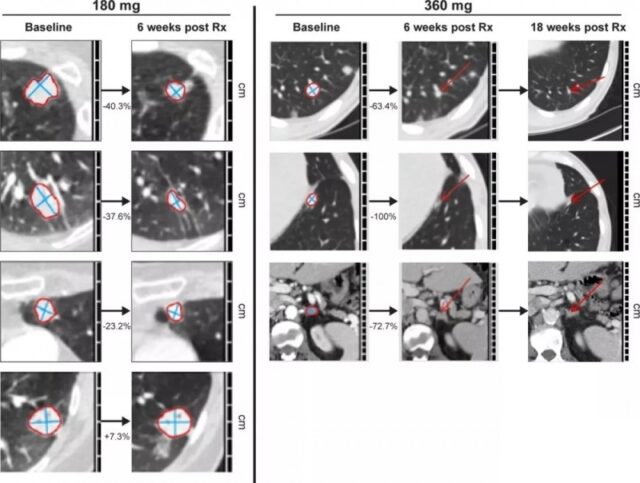 When used in combination with PD-1 inhibitors (which can eliminate the braking effect of T cells), 9 out of 10 mice disappeared. More importantly, the combination therapy seems to avoid cancer recurrence. In mice cured by this combination, their immune systems prevented the growth of newly implanted KRAS G12C mutant cancer cells. It also prevents the growth of newly implanted cancer cells with different KRAS mutations (called G12D).