The target of “unpreparable medicine” is in sight! What are the new developments of KRAS targeted anticancer drugs? 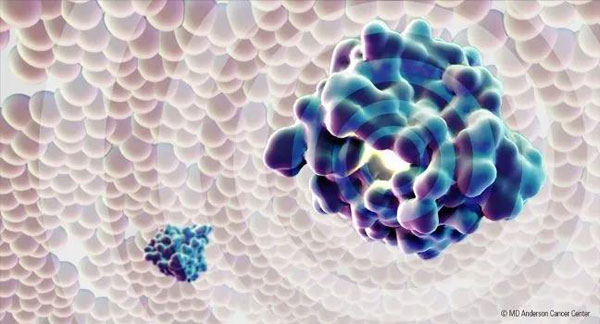 KRAS mutations are present in about 25% of tumors, which is one of the most common oncogene mutations.

Since the discovery of the KRAS gene mutation in 1983, researchers have been working to develop new therapies for this protein in the treatment of cancer.

Unfortunately, KRAS mutations have long been considered untreated with drugs, but recent breakthroughs have been made in the field of KRAS targeted therapy.

Dr. Shubham Pant, MD Anderson’s Department of Experimental Cancer Therapy and Associate Professor of Gastrointestinal Oncology, explained the role of KRAS mutations in cancer and the progress made in the development of KRAS inhibitors.

Q: What is KRAS? How does KRAS mutation cause cancer?

In healthy cells, KRAS acts as a “switch” and can regulate cell growth. When KRAS transmits a signal, it needs to bind to a molecule called GTP to enter the activated state; when GTP is converted to GDP, the KRAS protein enters an inactive state and stops transmitting the signal.

However, when the KRAS gene is mutated, the KRAS protein it encodes will get stuck in the “on” position, allowing cells to grow uncontrollably and activating downstream signaling pathways. This will make cell proliferation out of control, leading to cancer growth and metastasis.

Q: How common are KRAS-related cancers? Which cancers are related to?

KRAS mutations are present in approximately 25% of tumors, which is one of the most common oncogene mutations, which often induce lung cancer, colorectal cancer and pancreatic cancer.

Q: How to determine whether there is a KRAS mutation?

We can determine whether there is a KRAS mutation by gene sequencing of tumor tissue or by means of liquid biopsy.

It is recommended that patients with KRAS mutations consult their oncologists about clinical trials specifically targeting this mutation.

Q: Why has KRAS been considered “unable to make medicine” for a long time?

Usually during drug development, scientists will carefully observe the shape of a protein, looking for compounds that can bind to two key sites. Those protein molecules with a “deep pocket” structure are ideal, so that drugs can enter them and bind to multiple sites to exert their efficacy.

However, due to the small size and smooth surface of KRAS protein-like a shiny and smooth ball, its protein structure lacks the “deep pocket” structure that traditional small molecule drugs can bind to, and was once considered “unable to make medicine.”

In addition, it binds tightly to GTP in the activated state, which increases the difficulty of inhibiting activated KRAS.

In the past, we could not use drugs to target KRAS mutations, but now, new therapies allow us to directly block specific mutations, such as G12C. Researchers are carrying out relevant clinical trials to explore whether the downstream signaling pathway (the MAPK pathway activated by KRAS) can be blocked.

Q: For KRAS mutations, what research does MD Anderson have?

KRAS can be subdivided into many types of mutations, such as KRAS G12C, G12D and G12R. This brings up a problem: you can potentially classify all these mutations into different cancers, which can be treated with different targeted drugs.

The combined targeted therapy for SOS and MEK has shown promising results in preclinical models. Currently, clinical trials of this combination therapy have been carried out in KRAS mutant populations.

Small particles such as exosomes are usually an important way of communication between cells, but we believe that if siRNA is added to it, it may be able to selectively target KRAS mutations directly.

In addition, MD Anderson currently has a clinical trial: combining MEK inhibitors with hydroxychloroquine to block KRAS in patients with advanced pancreatic cancer.

Monotherapy with MEK or ERK inhibitors seems to be ineffective in most patients with KRAS mutations. However, it was found in pancreatic cancer models that blocking the MEK-ERK pathway can increase the autophagy signaling pathway in these models.

Hydroxychloroquine, as an autophagy inhibitor, can also be seen in the treatment response in pancreatic cancer tumor models.

Q: What is the most anticipated future of KRAS inhibitors?

In the past decade, with the advent of new targeted therapies, the use of drugs to treat KRAS mutations has become a reality. By combining direct inhibitors and downstream inhibitors of KRAS, the field is entering a promising era of innovative clinical trials, which is expected to improve the prognosis and survival of patients with KRAS mutations.

Dr. Michael Castro, an expert on oncology precision medicine from GoodYiyou.com.cn (who has been awarded the “Top Doctors in the United States” for many years) pointed out that there are already many KRAS G12C targeted drugs under development that have performed well in the clinical research stage, including: Adagrasib (MRTX849), Sotorasib (AMG510), JNJ-74699157 (ARS-3248), LY3499446 and pan-KRAS inhibitor BI 1701963.

Recently, MD Anderson Cancer Center and Mirati Therapeutics reached a strategic R&D cooperation to expand the scope of indications for two potent and selective small molecule KRAS inhibitors under investigation-MRTX849 and G12D inhibitor MRTX1133, and to evaluate their single drugs The safety and effectiveness of treatment or in combination with other drugs. G12C and G12D are the two most common KRAS mutations.

In five years, the two parties will conduct preclinical and clinical research on a variety of solid tumors, including non-small cell lung, pancreatic cancer, colorectal cancer and gynecological cancer.

The KRAS targeted drug is already in sight, and it is expected that it will be marketed as soon as possible to benefit more patients with refractory cancer.