Can KRAS G12C inhibitor be expected more effective in the future?

Can KRAS G12C inhibitor be expected more effective in the future?  In recent years, the treatment of non-small cell lung cancer (NSCLC) has made considerable progress, and the prognosis of patients has improved.

This progress is mainly due to improvements in the treatment of advanced disease systems, including the use of targeted therapy and checkpoint inhibitors for patients with specific oncogene mutations, and monotherapy or combination chemotherapy for patients without effective targeted mutations.

However, the prognosis of 6% to 20% of patients with advanced NSCLC who receive second-line or follow-up treatment is not satisfactory. In response to this current situation, tumor researchers have stimulated continuous exploration.

KRAS activating mutations can be found in 25-30% of non-squamous cell NSCLC, representing the most common gene-driven event in NSCLC. The Ras protein family includes three subtypes (KRAS, HRAS and NRAS). 85% of Ras-driven cancers are caused by KRAS mutations, which are mainly responsible for the key regulation of signal pathways such as cell proliferation and differentiation. Mutations can lead to continuous cell proliferation. And split.

NSCLC with KRAS mutations constitutes a population of molecular diversity and clinical heterogeneity, and standard treatment options can only provide limited clinical benefits. Among all KRAS mutations, the KRAS p.G12C single-nucleotide mutation (the glycine at codon 12 is replaced by cysteine) is the most common mutation in NSCLC, and the prevalence in lung adenocarcinoma is about 13% . KRAS G12C is also an important oncogenic mutation in patients with CRC and other cancer types.

Direct inhibition of RAS is an ideal method for the treatment of RAS mutant tumors, but unfortunately, because RAS protein lacks clear binding pockets and allosteric sites, and the affinity of RAS and GTP is at the pmol level, it is very It is difficult to design small molecules to replace active nucleotides. Traditional pharmacological strategies are difficult to screen for direct target drugs, making KRAS gene mutations have long been regarded as “non-drugable” targets. It is more to seek alternatives to direct target drugs to overcome this obstacle.

The idea that KRAS gene mutations are “not medicineable” lasted for nearly four years, until several breakthrough structural and mechanism studies established the conceptual basis for the clinical development of covalent and selective KRAS G12C inhibitors.

In 2013, Shoket and his team discovered an allosteric binding pocket behind the switch-II of KRAS-G12C protein. Based on the GTP binding state of KRAS G12C, they established a screening model for disulfide bond fragments and identified them. 2E07 and 6 H05, both of which are combined with the switch II pocket. This discovery laid the foundation for further research. 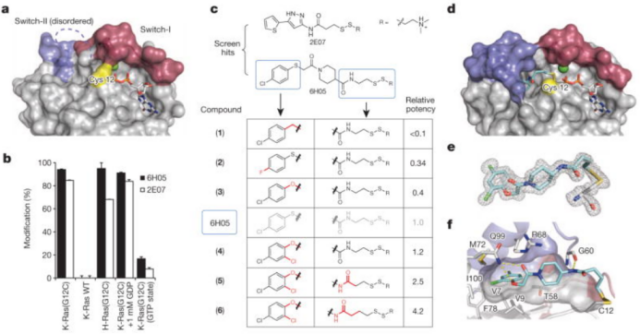 In 2014, Lim et al. proposed that the molecule SML-10-70-1 can slightly decrease pERK and pAkt at 100 μM, but has no effect on wild-type KRAS. However, it also affects KRAS G12S mutant cells, which suggests that it has off-target effects. Lito’s group further studied a KRAS G12C covalent binding inhibitor called ARS-853. They found that ARS-853 can only interact with GDP-bound KRAS G12C. The disadvantage is that the plasma stability is poor, so it was not continued in subsequent studies.

KRAS inhibitors are undergoing a series of clinical trials. Lito et al. found that some KRAS receptor tyrosine kinases can trigger nucleotide exchanges. AURK signal transduction promotes effector activation and cell cycle progression; cells with the new KRAS G12C mutation can quickly escape inhibition and resume proliferation, and these cells can quickly transform into an active state that is not sensitive to drugs.

Sorasasib counterattacked to the top

Sorasasib (AMG510) is a reversible and highly selective small molecule inhibitor targeting KRAS G12C. Sorasasib can be covalently bound to the pocket of the switch II region, which only exists in the inactive GDP binding conformation, which can trap KRAS G12C in an inactive state and inhibit the oncogenic signal of KRAS.

On May 28, local time, the U.S. Food and Drug Administration (FDA) announced the accelerated approval of Sotorasib for locally advanced or metastatic non-small cell lung cancer (NSCLC) patients with KRAS G12C mutation who had received at least one systemic treatment in the past. 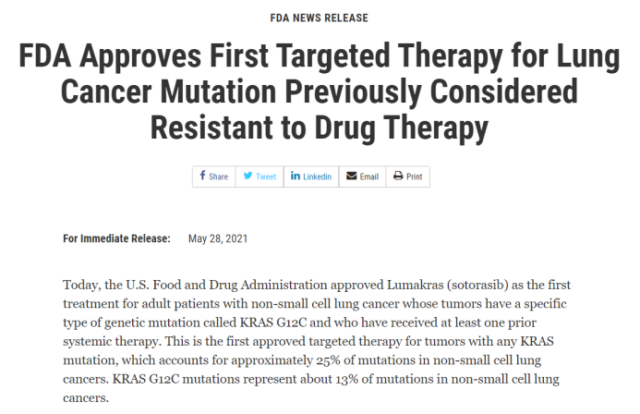 The first phase of the CodeBreaK100 trial involved pretreated patients with advanced solid tumors with KRAS p.G12C mutations, showing that the safety and effectiveness of Sorasasib monotherapy is encouraging, and it is particularly promising in the subgroup of NSCLC patients Anti-cancer activity.

In the phase 2 trial, the efficacy of an oral dose of 960 mg of Sorasasib (once daily) in patients with advanced NSCLC with KRAS p.G12C mutations who had previously received standard treatment was studied. The primary endpoint is the objective response rate (complete or partial response). 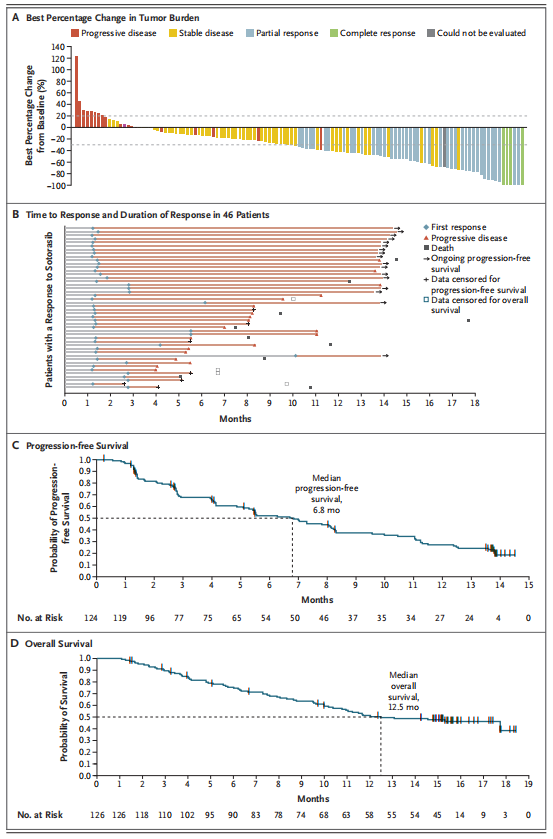 The following table lists the mechanism of action and research status of some KRAS G12C inhibitors. So far, after Sorasasib, the most promising one to enter the public eye is MRTX849 (adagrasib). 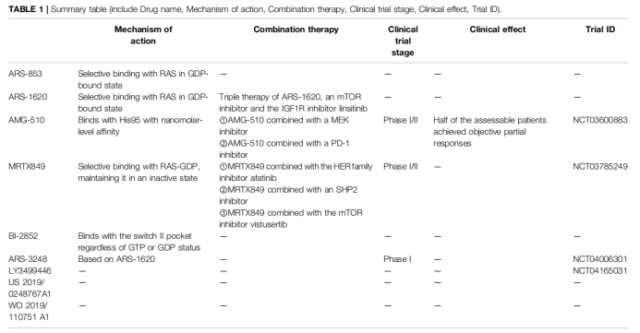 MRTX849 (adagrasib) is an oral KRAS G12C small molecule inhibitor. KRYSTAL-1 is a multi-cohort phase 1/2 study that evaluated the safety, tolerability, pharmacokinetics, metabolites, and drugs of MRTX849 in patients with advanced solid tumors with KRAS G12C mutations at a dose of 600 mg BID. Efficacy and clinical activity.

The study endpoints include safety, pharmacokinetics (PK) and clinical activity. Exploratory goals include the evaluation of pharmacodynamic biomarkers and the correlation between molecular markers and anti-tumor activity.

As of August 30, 2020, the results show that MRTX849 has shown acceptable safety and promising clinical activity in treated patients with CRC and other solid tumors with KRAS G12C mutations.

Kessler et al. developed BI-2852, which is different from the above-mentioned drugs in that it binds to the RAS switch I/II pocket with nanomolar affinity. In addition, BI-2852 can interact with KRAS in the GDP- and GTP-bound states, thereby blocking the interaction of all GEFs, GAPs and effectors with KRAS, preventing the propagation of downstream signaling pathways and the proliferation of KRAS.

Many of the latest research developments on KRAS G12C inhibitors were also announced at this year’s AACR annual meeting, showing a gratifying performance.

Jesse Boumelha and his team discovered RM-032, which is a potent covalent inhibitor of KRAS G12C(ON), which can be used in KRAS G12C(ON) and cyclophilin A (CypA), a highly abundant immunophilin ) Form a three-complex. RM-032 has dual selectivity for KRAS G12C (ON) and NRAS G12C (ON).

In vitro, compared with KRAS G12C (OFF) inhibition, RM-032 improves the persistence of RAS pathway signaling and cell proliferation inhibition in KRAS G12C tumor cells. RM-032 provides a broad combination of opportunities for the treatment of KRASG12C mutant cancer types, for example, combining upstream (such as SHP2 and SOS1) and downstream (such as MEK and ERK) and parallel pathways (such as mTORC1).

RM-032 is a next-generation selective inhibitor of KRAS G12C(ON) mutations. It can overcome the defects of the first-generation KRASG12C(OFF) inhibitors and provide patients with additional benefits by directly targeting the active form of this important oncogenic driver mutation. benefit.

LY3537982 can selectively inhibit the growth of KRAS G12C mutant tumor cells, but not the growth of KRAS wild-type or non-G12C mutant cells. LY3537982 can also play a synergistic effect to achieve better in vitro and in vivo targeted therapy with anti-tumor activity. Under certain biological backgrounds, the combined program can achieve broader and longer-lasting anti-tumor activity. LY3537982 plans to conduct its first phase 1 human clinical trial in 2021.

Obviously, KRAS inhibitors are a promising “new tool”, and more and more related drugs will be developed and applied in the clinic. However, due to the particularity of their structure, the research on these drugs is still in the exploratory stage, and there is a lack of sufficient effective clinical data, and their side effects are still unclear.

The issue of acquired resistance is also worthy of attention by researchers. In the recent “N Engl J Med” magazine, there is also a study on acquired resistance to KRAS G12C inhibitors. This study conducted genomic and genomic analysis on patients treated with adagrasib monotherapy. Histological analysis revealed that adagrasib treatment will cause a series of genetic changes.

In addition, there will be more new challenges in clinical practice in the future.