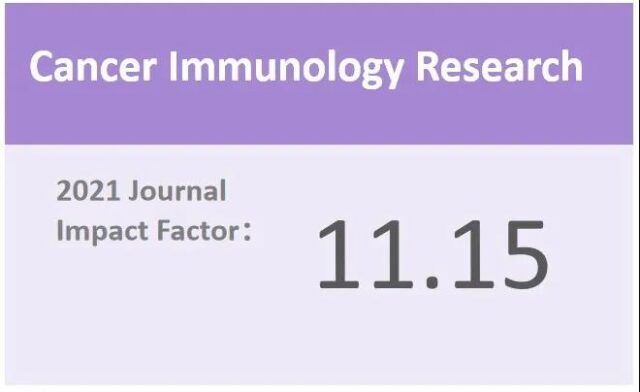 Immune checkpoint inhibitor (ICI) is a drug that targets immune regulatory pathways to fight and treat tumors. It has brought revolutionary changes to cancer immunotherapy. Despite the great success, a considerable number of patients have experienced immune-related adverse events.

The results of this study indicate that inflammatory regulatory T cell reprogramming is a feature of immune-related adverse events induced by immunotherapy. This study Deepen the understanding of immune disorders in cancer, and contribute to the effective stratification and management of irAEs; for this specific Tregs, it may also bring new treatment methods and bring hope for the development of liquid biopsy of irAEs .

Despite this, more than half of the patients do not benefit from these treatments, and they are often accompanied by autoimmune toxic reactions, which are called immune-related adverse events (irAE), which will not only interfere with the treatment , And may also lead to life-threatening situations.

So far, it has not been possible to predict which patients will have adverse reactions, which organs will be involved, and how serious the adverse reactions will be. Previous research results have proved that genetic susceptibility, gut microbiota, and cross-presentation of neoantigens are all related to the development of irAE, but the internal molecular mechanisms driving them are still largely unknown.

Recent evidence also shows that the efficacy of anti-PD-1 immunotherapy in patients can be predicted based on the expression of PD-1 by Tregs in the tumor microenvironment. Therefore, some scientists speculate that Immune checkpoint inhibitors (ICI) treatment can induce remodeling of Tregs in the body, and this remodeling plays an important role in the development of irAEs.

In order to verify the above hypothesis, the researchers published an article titled Regulatory T-cell Transcriptomic Reprogramming Characterizes Adverse Events by Checkpoint Inhibitors in Solid Tumors in the journal Cancer Immunology Research. The study proved the metastatic melanin from late stage through whole transcriptome sequencing analysis.

Tregs isolated from the blood of tumor patients (irAEs after ICI treatment) have undergone significant changes, with typical inflammation, apoptosis and metabolism features. These abnormally up-regulated features are on Tregs in other autoimmune diseases. There are also manifestations, indicating that inflammatory Tregs remodeling is a feature of irAEs induced by immunotherapy.

Transcriptome reprogramming of peripheral blood Tregs in patients with irAEs

First, the study humans isolated CD4 + CD25 + CD127- Tregs from the blood of 26 patients with advanced melanoma who had received anti-PD-1 treatment and performed transcriptomics sequencing analysis. Among them, 11 patients experienced pituitary inflammation. IrAEs such as thyroiditis, psoriasis and colitis.

Focusing on Tregs biology and immune-related genes, they identified the core characteristics of the significantly high expression transcripts in Mel-irAEs. These genes include chemokines and chemokine receptors involved in inflammation and leukocyte migration, such as CXCL2, CXCL16, CXCL10, and CCR1. In contrast, the expression of genes involved in activating Tregs functions such as CCR3 and SERPINE2 or metabolic processes such as ADAM12 and ATP6AP1L were significantly down-regulated in Mel-irAEs. Subsequent pathway enrichment analysis also showed that the Mel-irAE group had significant inflammation-like phenotypes, including leukocyte activation, inflammatory response, cytokine production, oxidative stress response, type I IFN signaling pathway, and IFNg signaling pathway. The results of these data analysis help to deepen the understanding of CD4 + CD25 + CD127-Tregs transcription level remodeling in patients with advanced melanoma. 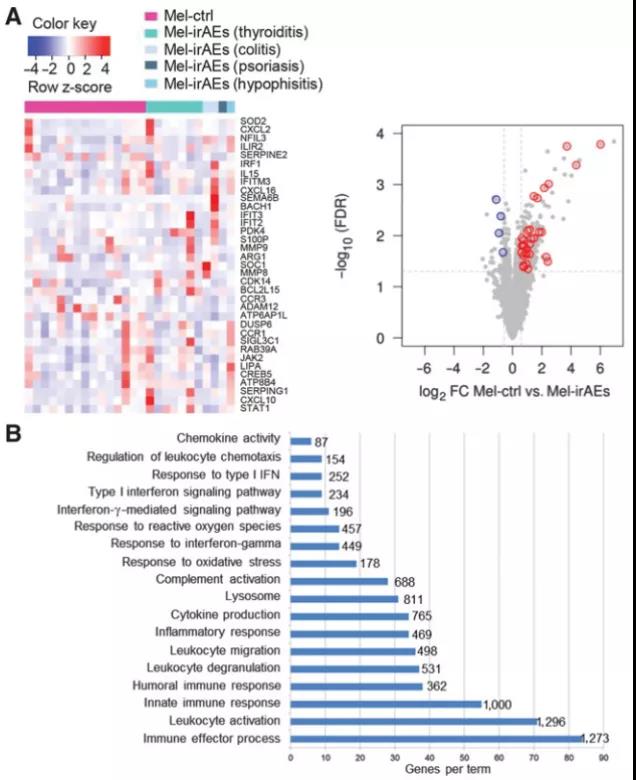 Although irAEs have a wide range of clinical features, it is still unclear to what extent they have common etiological features with spontaneous autoimmune syndromes. To this end, they performed transcriptome sequencing analysis on peripheral blood Tregs from healthy individuals and patients with autoimmune diseases.

It was found that, compared with Tregs from healthy individuals, Tregs under autoimmune diseases showed a deregulated transcriptome feature, including involvement in IFNγ signaling, leukocyte activation, autophagy, apoptotic cell death, and metabolic processes The regulation and other pathways of the cytoplasm showed a significant up-regulation.

Therefore, the Tregs of patients with autoimmune diseases and irAEs have a common transcriptome feature, that is, a significant enrichment of pathways such as inflammation, apoptosis, and metabolism. 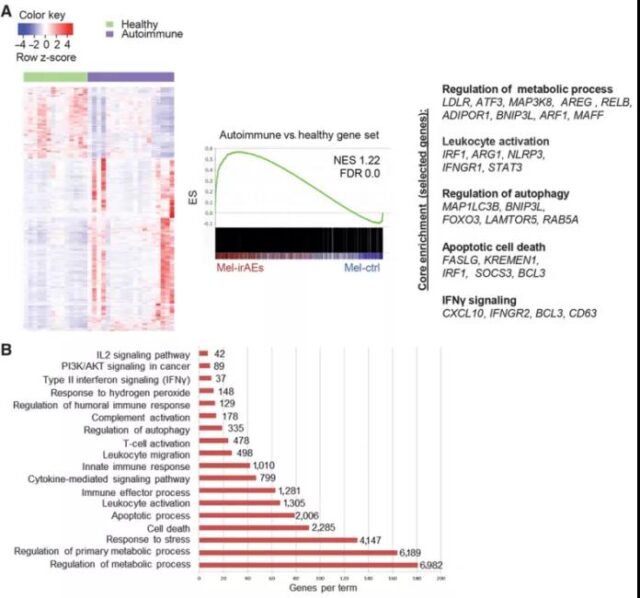 In different types of cancer, the transcriptome characteristics of irAE-Tregs are similar

Next, in order to test whether the inflammatory reprogramming of Tregs is only for melanoma patients who have irAEs after anti-PD -1 immunotherapy, the researchers have or did not have kidney, liver, and bladder with irAEs after anti-PD-1 immunotherapy Tregs from patients with and non-small cell lung cancer were analyzed by transcriptome sequencing.

Similarly, compared with the control group, the Tregs in the CA-irAEs group also showed enrichment of leukocyte activation, cytokine production, immune effect processes, and stress response, which indicates that this unique pro-inflammatory transcriptome profile is incompatible with The primary disease is not very relevant. 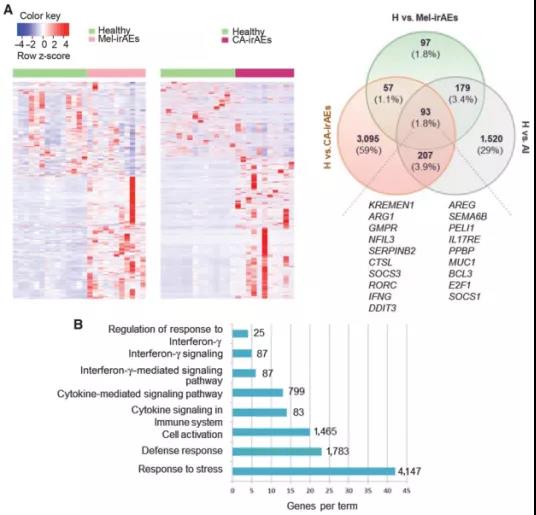 In summary, the study described the strong inflammatory properties of Tregs after cancer patients received anti-PD-1 immunotherapy and developed irAEs through transcriptome sequencing analysis, which is common in patients with different cancer types; in addition, Tregs from individuals with irAEs also showed metabolic remodeling, which is consistent with the dysfunction of Tregs observed in individuals with autoimmune diseases.

This research has deepened the understanding of immune disorders in cancer and is helpful for the effective stratification and management of irAEs. That is to say, for this specific Tregs, it may bring new treatment methods and contribute to the development of irAEs. The liquid biopsy brings hope.