Can HER3 become a medicine even it is quite different from HER2?

Can HER3 become a medicine even it is quite different from HER2?  Since the discovery of the mechanism of the dimer of HER3 and HER2 to the present, no drugs based on the HER3 target have been successfully marketed in the past 30 years. People have to wonder if HER3 is a drugable target?

01  The difference between HER2 and HER3?

With the increasingly fierce competition in the field of oncology drug research and development, the exploration of various drug forms based on established drug targets is a relatively low risk research and development option. However, the commercialized drug targets that have been successfully operated have fierce competition. The star target PD-1 in the field of tumor immunotherapy is a typical example.

Therefore, in order to avoid the foreseeable competition in the Red Sea market as much as possible, it should be the best choice for many pharmaceutical companies to choose targets with similar star targets and similar functions. Just as the current major pharmaceutical companies are exploring immunological checkpoints such as LAG3 and OX40, it is a pity that there are few successful ones. At this time, we might as well focus on the redevelopment of mature targets in the field of targeted drugs.

The popularity of HER2 (human epidermal growth factor receptor 2, also known as ERBB2) in the field of targeted drugs is not lost to PD-1 in the field of tumor immunotherapy, and the reputation of anti-HER2 monoclonal antibody trastuzumab is not lost. There are a lot of anti-PD-1 monoclonal antibodies, and the development of ADC drugs based on the HER2 target is also the direction of the current fierce competition. 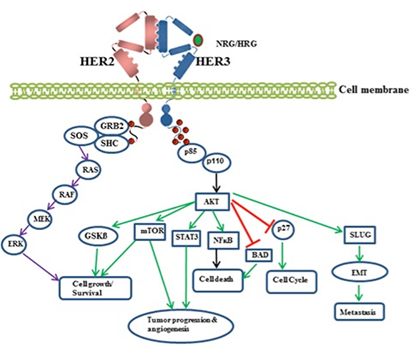 It is worth mentioning that HER2 is a mature target for tumor therapy. So far, no ligand that can directly bind to HER2 has been found in the human body. HER2 must form a homodimer or heterodimer with other members of the family (such as HER3) After the dimerization of HER2, the conformation changes, which activates the activity of intracellular tyrosine kinases, and then activates downstream pathway nodes (MAPK signaling pathway and PI3K/AKT signaling pathway), thereby exerting corresponding physiological effects.

In addition, HER3 is expressed in the gastrointestinal tract, reproductive system, skin, nervous system, urinary tract and endocrine system of normal adults, while the overexpression of HER3 protein is associated with many cancers, including prostate cancer, bladder cancer and breast cancer [ 2].

Based on this, many R&D institutions have also shifted their attention from the highly competitive HER2 to HER3, hoping that this target in the same family as HER2 can also serve as a new target for tumor treatment. 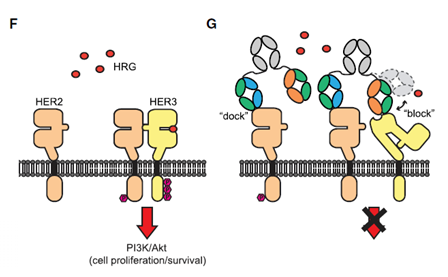 The reason for the slow progress in the development of tumor drugs targeting HER3. The main reason is that HER3 itself has low binding capacity, does not have the intrinsic kinase activity of other family members such as HER2, and does not have a suitable Biomarker that reflects whether HER3 is activated or not, which causes great difficulties in drug development.

But just like BRCA’s PARPi’s turn to gold, HER3 has been waiting for the appearance of its prince charming. At present, HER3, Cinderella’s Prince Charming, is another star target in the current tumor treatment field—NRG 1 (the ligand neuregulin 1, also known as HRG 1).

NRG1 is a member of the epidermal growth factor (EGF) ligand family. In the body, NRG1 can bind to HER3, thereby causing a conformational change in HER3, thereby realizing dimerization, phosphorylation and activation of signal pathways. It can be seen from this that HER2, HER3, and NRG are important signal sources upstream of signaling pathways such as PI3K/AKT and MAPK in the body. Based on the bridging role of HER3, by targeting HER3, then blocking the formation of HER3/HER2 heterodimer or blocking the binding of NRG and HER3, theoretically will bring new breakthroughs in the treatment of cancer.

In particular, NRG1 can be used as a HER3 target drug to activate Biomarker, and NRG1 gene fusion occurs in 0.2% of solid tumors, including lung cancer, breast cancer, ovarian cancer, etc., and the incidence is high in certain subtypes, such as lung infiltration Mucinous adenocarcinoma (7%-31%), pancreatic ductal adenocarcinoma (6%). 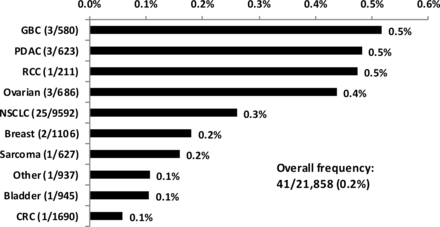 In addition, due to the mutually exclusive mechanism of carcinogenesis, when NRG1 fusion proteins are found in tumors, there are usually no other known oncogenic driver gene mutations, such as EGFR, KRAS, ALK, ROS1 and RET mutations. Based on the above advantages, NRG1 itself is a perfect effective target for tumor treatment. Coupled with the currently commonly used clinical chemotherapy and immunotherapy, the treatment response is not good for patients with NRG1 fusion. The research and development of HER3-related drugs is worth looking forward to for patients with NRG1 fusion tumors.

At present, many companies have been deploying HER3 target tumor drug research and development. Based on the low binding capacity of HER3 itself, the types of drugs are mostly monoclonal antibodies and bispecific antibodies. It also includes the exploration of the popular ADC and proteolytic targeting chimera (PROTAC) technology.

Figure 4 is from clinicaltrials.gov and the official website of each company

The most representative in the antibody field is the HER3 monoclonal antibody-Seribantumab developed by ElevationOncology, which has excellent preclinical data and is currently conducting a Phase 2 basket clinical trial for solid tumors (CRESTONE, NCT04383210);

The HER2/HER3 double antibody, Zenocutuzumab, developed by Merus, has also progressed very rapidly. It can block the dimerization of HER3 and HER2, and also block the binding of NRG1 and HER3, thereby stimulating a stronger ADCC killing tumor cells. In the published phase 1/2 clinical (NCT02912949) partial data, the results are encouraging. Expect the effect on a larger sample size.